Ok, you’ve got 6 figures in your gold account, you’re decked head to toe in epics dropped off the Auction house, or bought through contracted guild raids, and you have every pet and every mount. You fully find your stable of 90s and your guild looks to you for all their running money. You don’t need a gold guide, you should be writing one. Now go away and get back to work.

The Three Sources of Gold Acquisition 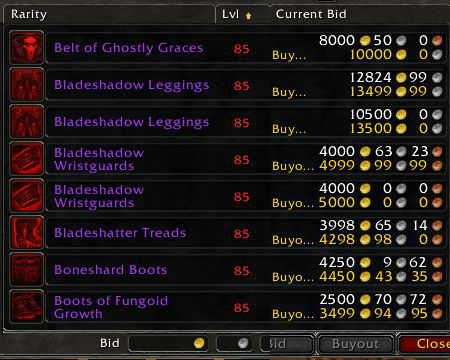 Stuff to spend gold on.
Sure, it’s older stuff, but you get the idea.

Basically there are three ways to get gold in the World of Warcraft (and pretty much any other video game or MMO) and that’s to complete quests (and kill & loot mobs,) sell stuff to the vendor, or sell stuff to other players. While there are a few other bits where you can grab some cash (such as opening chests & boxes) those three areas cover 99% of the gold accumulation that you will ever do.

While quests and vendors are pretty clear, selling stuff to other players involves gathering stuff that they might actually want to buy (and pay a lot of money for.) Some of the items that you will (or could be) gathering or creating for these sales are:

One of the things that effects the price you can ask for an item is how people actually buy that item.

This becomes important when you’re posting your items on the Auction House (AH.) A scribe or Leatherworker might pick up a dozen (or more) stacks of raw materials at one time, and come back for more later, so even if you don’t have the lowest price your items will sell (assuming you’re not crazy high with the price.)

Any given character will only buy one each of any given crafted item. So when putting these items up for sale there’s more incentive to have the lowest price on that item. This is why you will see all the glyphs sellers constantly undercutting each other. As a seller of materials you don’t have to play the undercutting game, at least not so much.

Even if the current price for raw materials is low, at the moment, you will still sell your stuff if you price higher. Look at the AH over the week and you’ll see the prices vary. Keep your prices a little higher and you’ll make a lot more in the long run. If stuff is priced too low then either delay your posting or buy it out to resell.

Note: Some crafted items sell for a pretty penny, especially if they’re popular from Transmog or hit a nice spot in the itemization that players always want. Warlords gear crafting professions had something like Steelforged Essence, which would boost a Blacksmith created weapon by 15 item levels. You’d have to gather a lot of skins/ores/herbs to make up for the sale of one of those items.

Check the various items you’re able to craft. Experiment with a few. You might be pleasantly surprised.

Ok, Let’s Get Started with the Tips

If you really want to accumulate massive gold then your best bet is to treat yourself to a good tool. Of course you can browse the WoW forums for hours, sifting through the crap, or search elsewhere. Eventually you’ll probably find some good stuff. If you don’t mind spending the time.

How much gold can you make? A few hundred a day will meet pretty much everyone’s needs and that amount is within the reach of just about anyone willing to put in a bit of effort. Still, it’s nice to think about the big gold pile, isn’t it? Spend 2 grand on a Harris Pilton bag? Shrug. 10k on an item or 20k on a mount? No sweat. Fund all your guild raids, your alts, your and their consumables, etc.? Petty cash.

If you want the good stuff then go here and start getting a lot more gold.