The first thing to do when beginning a fight is to apply your DoTs to the target, Insect Swarm and  Moonfire.  It’s important that you keep these constantly applied to your target, however,  you should refresh them only a tick or so before they expire to avoid wasting time or mana.

Next you’ll need to manage your eclipse cycle, start by casting Wrath until you enter the Lunar Eclipse whereupon you’ll want to use Starfire.

Once your Lunar Eclipse fades, continue to cast Starfire until you obtain the Solar Eclipse buff and follow that up by casting wrath looping back into the first stage.

Make certain to continue reapplying your DoT’s and utilizing Starsurge whenever possible throughout your rotation.

During AoE fights you should be using and detonating your Wild Mushroom spell and using  Starfall whenever it’s available as well as applying your DoTs, Insect Swarm and Moonfire, on every target.

Innervate should be used on yourself whenever possible unless someone else in your raid specifically requires it, such as one of your healers.

The most important stat to check for when reforging your gear is 17% spell hit, the point at which your spells can no longer miss.  You’ll want to always check and make certain that you’ve achieved this before reforging into other stats such as Haste and Mastery.
Once you’ve reached 17% Spell Hit your next most important/valuable stat is Haste, followed by Mastery.

As your most important stat to stack is intellect, it’s safe to forgo a socket bonus in favor of stacking +intellect gems in your gear unless that socket bonus itself grants intellect. 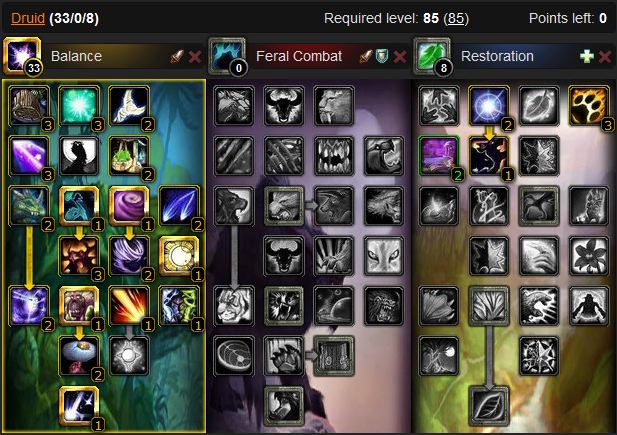