Patch 5.4 will be landing in your lap very soon (Sept 10 is the announced date.) There are lots of changes, some big, many small. The big change, as you may have heard, is the elimination of Readiness. As with most classes there are quite a few smaller changes. Here’s a rundown of what the patch 5.4 Hunter changes are:

Comments on the Hunter Changes

The biggest change is that your Readiness ability is going away (and will be the cause of much QQing.) Gone, dead, etc. It is not being changed or replaced. While this hurts, it’s probably better for game balance and will prevent Hunter teams from instantly blowing away the opposition in PvP. Another hit is your Deterrence  which is now on a 3 min cooldown. You will also be able to Disengage a bit more often.

Your old standby, Arcane Shot, now does more damage at a higher cost. If you fire it off with your burst cooldowns you will be hitting that much harder. Two shots do the same damage as three did in patch 5.3. This also gives you an extra global cooldown to play with. It works out to a pretty interesting change it you use it right. Hunters who live by just spamming the thing might be unhappy, till they see how hard it hits.

Binding shot was changed from a talent to an ability (for Marksmanship Hunters at level 30) in patch 5.3, but is now a talent again. It takes the place of Silencing Shot and Silencing shot becomes a Markmanship only ability. So Beastmastery and Survival will no longer be able to use this ability. In its place all Hunters now get an interrupt, Counter Shot, learned at level 22.

Murder of Crows (level 75 talent) was nicely buffed, which makes it definitely worth considering for Survival and Marksmanship. It’s definitely competitive with Blink Strike, the old favorite.

Narrow escape was changed a bit, the webs can now be dispelled as they’re a “nature spell” rather than a physical effect. This will have some effect in PvP, but isn’t a big thing.

Has your pet been feeling a little too dead, recently? Glyph of Mending has been buffed to twice the healing as before.

Even with the various changes, such as the elimination of readiness, Hunters are still strong in PvP. Beastmastery won’t be able to just unload a lot of upfront damage and it won’t be the primary “go to” spec any more (at least until they change something else) and this allows all three specs to be useful and viable. That’s a plus. (There’s lots more on general Hunter PvP at Skill-Capped.)

As noted above your Deterrence has more flexibility in use, Your Arc. shot does more damage, and all Hunters have an interrupt. While your Hunter’s Mark only lasts 20 seconds on players (still 30 on non-players) it’s still enough.

Stampede no longer has its damage reduced outside of Arenas and the Battlegrounds. It will do full damage in any World PvP.

All in all you’re still a great PvP class.

Arcane Shot is now harder hitting and will be less spammy, Deterrence is more flexible, for those times when you really need it again. Explosive Trap was nerfed. Each spec has at least one attack that was nicely buffed.

Stampede no longer has its damage reduced outside of Arenas and the Battlegrounds. This is a pretty big buff if you use Stampede in PvE. A Murder of Crows was also nicely buffed. So you lose Readiness and do more damage otherwise. Now, instead of blowing everything in a massive burst every 5 minutes you will be doing more consistent damage. 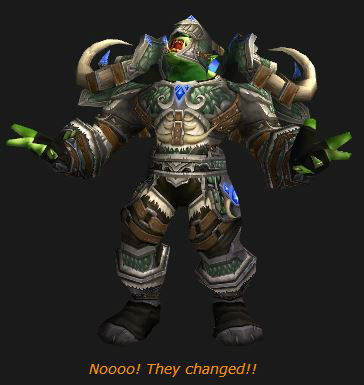 There are no new minor glyphs

If you’re not yet level 90 you won’t be able to kick Hellscream’s butt in the Siege of Orgrimmar, so go here and get leveled fast.