The Rogue in Mists of Pandaria 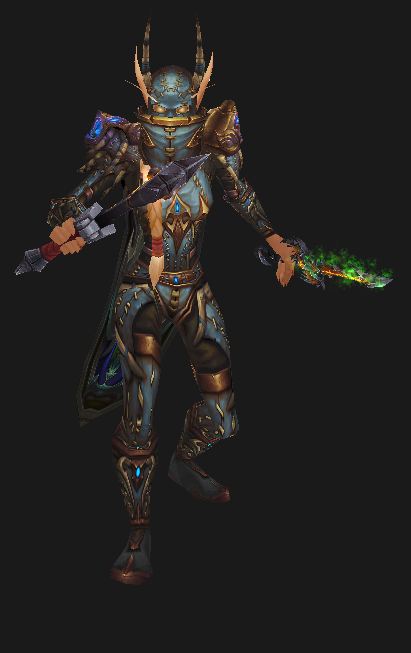 Cataclysm somewhat simplified the talent system and added a few new abilities. Mists of Pandaria is taking that a couple of steps further and revising it completely.

The following talents have been removed from the game with Mists of Pandaria. Some of their utility has been rolled into other talents and abilities.

Rogue Abilites in Mists of Pandaria.

All Rogues will get all of these abilities, eventually. Note that some abilities are unchanged except for the level at which they are learned. New abilities, or those that have changed significantly are linked and should pop up a tooltip when you hover over the link.

These are the abilities for each spec, you’ll pick them up from your trainer as you level. New abilities are linked. Note that certain abilities (eg: Backstab) are now only available to one spec. Dispatch replaces Backstab for Assassination.

Abilities in bold are your “core” abilities.

As mentioned above the talent system has been completely revised. Now, any spec can pick any of the talents. Yes, that means than Combat Rogues can take Shadowstep. There are six tiers of three talents and you can pick one from each tier. Tiers are gained at levels 15, 30, 45, 60, 75, and 90. 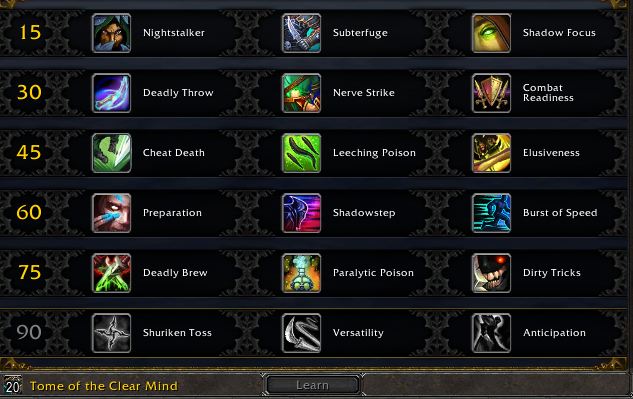 (Tome of the Clear Mind is used for Glyph swapping at level 86+.)

The talents. Hover over the links for more info.

An overview of the talent system for Rogues

Other Changes in Mists of Pandaria 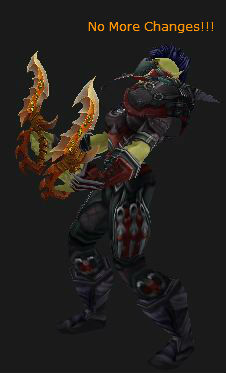 Poisons are now buffs and work like any other buff. You cast them and they’re on you. You do not apply them to your weapons directly and if you switch weapons you do not need to reapply them, they are already there.

You can apply one lethal and one non-lethal poison. No more Instant Poison on both weapons. By the way, Instant Poison is gone (and it’s the only one that’s gone, the others remain.) If you have any Instant in your bags and try to apply it you will find that Wound Poison is applied instead. By the way, you no longer have to buy poisons or stock them in your bags. You learn them as abilities and use them like spells.

Your thrown weapons slot is gone (that third slot is gone from all classes, even those who have relics there.) In addition you can no longer equip, or use, ranged weapons. You still have a Throw ability,  which uses no ammo, and you have the Deadly Throw and Shuriken talents.

All weapons of a type have the same speed. All daggers are 1.8 speed, swords/axes/etc. are 2.6. You should be able to put any usable weapon in either hand.

Rogue leveling is easy. All specs work well, but Subtlety is more fun.  Regardless of which build you choose you will find leveling to be relatively easy. Still, there are thousands of quests and a bazillion mobs to kill (not to mention other players, but they don’t count here.) Sorting out which quests are best and which series of quests will get you to 85 the fastest is another game, which is why we highly recommend Zygor’s Guide.

Grab your copy here or read our review.