The Affliction Warlocks’s job is to maintain high single and multiple target damage. You bring useful pets and  abilities to the raid (or dungeon) in addition to other abilities.

This page is aimed at level 100 raiding, though the info will be useful for dungeon and for lower levels. If you’re not quite there or want different info then see just below for links to our PvP and Leveling pages.

Updating for Warlords of Draenor.

The talents shown are a best overall pick, but there are times when you will want to switch talents to better match specific fights. Keep a stack of tomes handy so that you can do this. These picks also assume that you will be moving around a fair amount and will be subject to some form of area (or occasionally targeted) damage. Otherwise they’re aimed at max DPS. 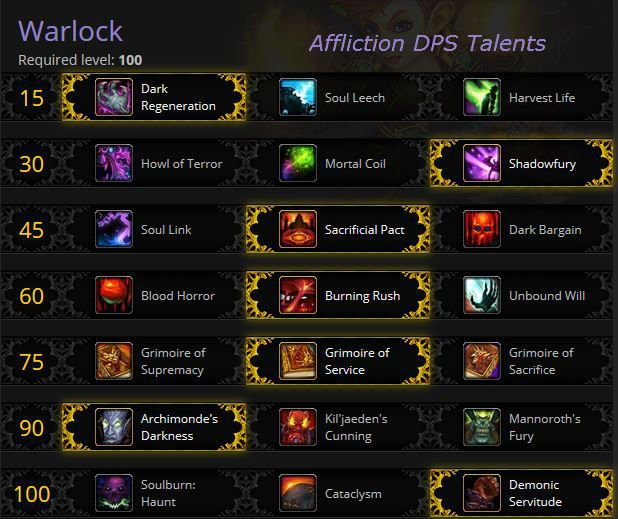 All three of these talents can be useful under varying circumstances.

All of these have their uses. Which one is “best” depends on the fight. Pick whichever your find most useful in a specific encounter.

All of these cost Health to use.

All three talents are viable in certain situations.

Like the talents your glyphs are situational. Feel free to switch them up as desired, depending on just what you’re doing. Talk to a friendly scribe (Inscription) for a package deal if you want a bunch of, or all of the, glyphs. There are no required glyphs and a lot that have some use, depending on the fight.

Note that glyphs that are exclusive with each other cannot be used together. For example, you will only be able to use one of the “Resolve” glyphs at a time.

Minor Glyphs are pretty much just cosmetic, though there are exceptions.

Various stats (Hit, Expertise, Resilience, and PvP Power) were slain with Warlords of Draenor. So was the reforging capability. In exchange your have two new stats, Multistrike and Versatility, and several minor (tertiary) stats.

All characters now have an attuned stat which gives them more of one secondary stat. Yours is Eradication, which adds 5% Haste from all sources.

Also note that Int is no longer available on high level gems or enchants.

Just in case: DOT = Damage over Time effect, such as your Unstable Affliction.

Intellect improves everything you do, as it adds directly to your Spellpower. You get Int from your gear, runes, flasks, potions, and a few effects. You no longer get it from gems or enchants.

Haste reduces cast times, reduces the Global Cooldown, and increases the speed at which your DOTs tick. For single target fights it’s your best stat.

Mastery increases the damage of your DOTs. You should try to keep it close to the value of your Haste. Note that when “multi-dotting” (DOTing 2 or more targets) mastery’s value will pull ahead of Haste as it simply affects more stuff. Also, Mastery is a good stat for all Warlock specs, so if you favor Mastery you don’t need separate gear sets.

Multistrike gives you two chances for an addition attack/heal, at 30% effect. Multistrikes can proc anything that any other strike/heal can proc, and they can also Crit.  Unfortunately, you don’t do procs and multistrike does not grant nightfall procs.

Critical Strike gives you a chance for 200% effect from your attacks/heals. Crit doesn’t bring anything special other than damage (no procs, for example.)

Versatility is a direct add to all of your damage and healing and, at half value, to your damage reduction. It’s a better PvP stat than PvE. It’s not useless, but Mastery or Haste will give you a much better return for your stat budget.

There are various tertiary stats which randomly appear on PvE gear. These are Avoidance, Speed, Leech, Indestructible, and gem sockets. All are nice when you find them and none appear on gems, enchants, potions, etc.

How to Get the Job Done as Affliction, Rotations, etc.

First off, you have various buffs, defensive and utility abilities, and a few others that can assist the raid in one form or another.

For yourself and for the Raid.

Apply your DOTs and maintain them. Use Haunt and Drain Soul as appropriate. DOTs can be refreshed when 30% is remaining, which avoids any DPS loss.

As an Affliction Warlock your top priority is maintaining your DoTs on a target at all times to maximize DPS.

When facing small groups of targets simply apply your DoTs to all targets using Soulburn and Soul Swap while otherwise maintaining your single target rotation of using Drain Soul when necessary to generate Soul Shards or when a target is at or below 20% health.

Against larger groups you should instead use Soulburn with Seed of Corruption to quickly apply Corruption to all targets. Otherwise continue as above, applying your DoTs to as many targets as possible followed by using Drain Soul.

Unlike previous expansions the gem sockets are not common. Gem sockets have a (small) random chance to appear on Raid gear. There are no meta gems or sockets, there are no socket bonuses, and all sockets are “prismatic,” which means that they will take any available gem.

The gem themselves are all prismatic, meaning they fit into any socket. None have Int, they all have secondary stats (Mastery, etc.) None have tertiary stats, such as Speed.

Older (Mists of Pandaria) gems work until item level 600, but the item squish cut them down a bit. What used to be 160 Int is now 10, for example. Also, the older gems (Mists of Pandaria and lower) that used to code for Hit now do Crit, gems that had Expertise are now Haste.

Affliction Warlorcks should gem for Mastery, as it’s the best overall choice.

As with earlier enchants, all of the Warlords enchants can be placed on lower level gear and will scale appropriately. So yeah, you can put them on your level 1 items.

Haste and Mastery consumable are both shown, but default to Mastery if you’re undecided.

In Warlords there are no professions bonuses. No special stat boosts that characters without the profession cannot get. The only profession that provides a stat buff, to yourself or anyone else, is cooking (feasts will feed the raid for +100, foods +125, to their best secondary stat.)

That said, some of the professions have useful crafted items.

Ok, there aren’t any race choices that are specifically good for Affliction, as opposed to any other Warlock spec, so go Undead. If nothing else they look the part.

Which is best? The one you like to play. The racials are soooo close in overall DPS (less than 1% top to bottom) that blinking at the wrong time will override any advantage one might have over the other. But, since you insist…

Pandarens will never be able to become Warlocks.

Are you working on your Warlock to reach the end-game raids? Already there and leveling another class? With thousands of quests and a few bazillion mobs to grind the trip to top level can take a while . . . a long while, even if you’re done it before.

There’s an easy solution which will speed up your leveling, by a lot: an in-game leveling guide, Zygor’s Guide, almost automates the whole leveling path for your ‘lock, regardless of which level you start from. You still have to play the game, of course, but the “where to go and what to do” part is neatly taken care of. You’ll never wonder what to do next.

Pick your starting point and Zygor’s will show you exactly where to go, what to do, and the best order to do it in. It automatically updates and advances as you complete tasks and quests, sets a waypoint arrow automatically (always showing you where to go next,) and includes all the important quest info. You will probably never need to look at your quest log again, much less stop mid-play to browse some website.

Zygor’s is always quickly updated for all patches and expansions and includes some nifty extras, such as an in-game talent advisor. Grab your copy here and get leveled fast, or read our Zygor review first.