Shadow Priest PvP in the Mists of Pandaria

Shadowpriest PvP in the Mists of Pandaria

Shadow Priest PvP, arguably, has at times been pretty sweet. Priest specced to Shadow can do impressive amounts of damage in a short period of time and even have decent survivability.

This guide is oriented towards level 90 Shadow Priest PvP. If you’re not level 90 you’ll have to adjust appropriately. To get to 90 ASAP grab this leveling guide.

They have the DoTs, some limited healing/mitigation through Vampiric Embrace and Power Word: Shield, CC techniques, great buffs, powerful blasts, and more. The Shadowform increases damage and reduces incoming damage. Not bad.

See below for selected patch 5.3 and 5.4 notes. 5.3 brought some nerfs, but Shadow is still viable. You just have to play it a bit more cautiously.

Some quick notes on S. Priests, scroll down for more detail. See this post for 5.3 and 5.4 PvP changes

Feel free to comment on these talent picks. Keep in mind that talents can be easily switched anytime you’re out of combat. Pick the new talent, spend a tome, follow the prompts, and you’re done.

Description are below the image and our picks are checked

Important note: most all of the talents are viable in one situation or another. Depending on what you are doing you might want to try other picks. Use what works best for whatever form of PvP you are doing. 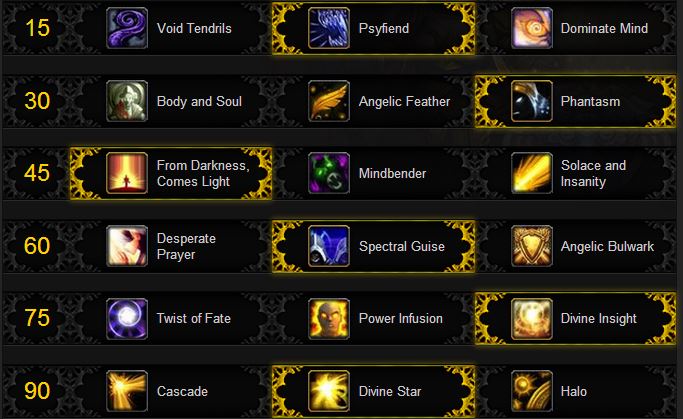 The major glyphs have all the useful spell changes, the minor glyphs are just cosmetic. Shadow has a number of useful glyphs, and these are more or less in order of interest. Which glyphs will depend on exactly what your role is. How much healing are you doing, for example.

Click Here for Faster Leveling,
even in Mists of Pandaria 5.4

Back to: Top of page

Hit and Expertise add in to your Spell Hit. You want a total of 6% Spell Hit. Spirit from gear and effects (and the Human racial)  also factors in. In short, 6% Spell Hit should be easy.

Intelligence is your spell power and it adds a bit of Crit. It’s still you best damage stat.

Haste reduces casting time of all spells including damage, heals, CCs and utility. It reduces the Global Cooldown of instant casts and reduces the tick time between DoTs and Renew. With the large amount of CC and movement in PvP, fast casts are essential.

There are also certain haste breakpoints at which you gain extra ticks on your DoTs and Renew. The most important breakpoint is 24.97% for SW:P and DP, but 30.01% for VT is achievable with Grievous gear and should be obtained.

Mastery sounds better than it is. It increases the chance for all your DoTs to tick twice. About the only times where Mastery will be better than Crit is in big fights, where you’re spreading your DOTs out among a lot of targets. For all the rest, go with Crit.

PvP Power is like attack power for PvP only. It adds directly to your damage and heals on other players and has zero effect outside of PvP. Nerfed hard in patch 5.3 it’s still decent, but the PvP Power on your gear will be enough.

Resilience is 72% is patch 5.4, regardless of gear. Stacking it isn’t necessary, but if you really want more there are the gems and there is also a set bonus from the two PvP trinkets, which adds about 10%.

Make sure you have your Spell Hit to 6% and reforge everything else into Haste, then Crit. Get a reforging addon to make that job easy.

Point for point Int is more valuable than PvP Power. The PvP Power and the Resilience gems no longer have double the stats of Int gems (they lost that in 5.3.) This means that we are no longer gemming for either. You should also have no need to gem for Hit, though if you DO then an Int/Hit gem is a good way to go.

If your gold stash is too low to buy all the best gems and stuff, check these gold tips.

While none of the professions helps alot with high end PvP they all have some benefit. They’re expensive to level and if you just need gold then go with the gathering professions and work them. The crafts are for those who need every last bit of burning power. All of the regular professions offer a self-only buff of some sort.

Leveling any of the crafting professions will be expensive. Check out Tycoon if you are short on gold.

Since the gems with secondary stats (PvP Power, Haste, Etc.) have twice the value of those with primary stats (Int) you’ll see that Blacksmithing, which allows two more gem slots, will give you 640 PvP Power Vs the 320 or so Int bonus that the other profs give you.

Herbalism provides 2880 Haste rating every two minutes, so might be well worth considering.

Pandarens can be Priests, Orcs are the only race which cannot be priests.

The best race choice is the one that you want to play. Your skills will far outshadow any of the racials. That said, here’s a rundown of the racial bonuses.

Pandarens get to choose, once they leave the starting area, whether they will join the Horde or the Alliance.

Goblin – Holy relics for sale! What? Of course they’re genuine! You calling me a con gob, bud?

Tauren – You have no interesting Priest specific abilities and you’re the butt of cow jokes.

Worgen – Oh my, Father Wolfie, What big teeth you have…

Shadowy Videos for Mists of Pandaria

A nice discussion of talents, builds, and glyphs in 5.4.

This is a basic “how to Shadow PvP” guide.

Skill-Capped has a very nice collection of Priest PvP guides (all specs) and a lively forum. Not free, but $4 a month won’t break your budget. Check it out.

Here are some of the Skill-Capped videos:

A macro for using your “on use” trinket and similar buffs, such as Synapse Springs. ’13’ is the trinket slow, 10 is the glove slot. (All the slot IDs are here.)

General Targeting – use this to target someone with a keypress, rather than clicking or tabbing. Best for Arenas, since you have only a few opponents. Make one for each opponent, eg: arena1, arena2, etc. You can also target your team members, just insert their name in place of arena1.

You can do the same thing with “focus.”

Shadowfiemd– Summons the fiend if it’snot already up, makes sure it’s “defensive”, activates ShadowCrawl, and attacks.

Focus Silence – Silences your focus target. Very nice for when he’s being annoying (such as casting something at your team.) You can also use [target=arena1] (or 2 or 3)  for other targets.

These abilities define you as a Shadow Priest, all the other abilities and talents are common to any Priest.

WoW has about a bazillion quests and sometimes one is left with the question, “where to go… how do I find… what to do next…?” Especially if you haven’t already leveled several characters to the max. Sometimes even if you have.

Leveling your Priest, of any build, doesn’t have to be an exercise in frustration. Snag yourself to an in-game leveling guide, like Zygor’s guide, and you will never again have to ask any of the “Where to go…” questions. Zygor’s gives you the fastest step by step path and is fully automated. This means that the guide knows where you are and updates your quests and directions as you move along (though it won’t play the game for you.)

Grab yourself a copy of Zygor’s guide (or read a review of Zygor’s Guide first) and blast to level the level cap quickly and painlessly.

9 thoughts on “Shadow Priest PvP in the Mists of Pandaria”