Feral can still hold its own in Raids and PvE and this page focuses on the Feral Cat form as a damage machine in a PvE (raiding) environment. For PvP or leveling see the links just below.

This Feral Cat Druid guide is primarily intended for use in PvE and Raiding at max level. However, the principals will still apply during the leveling process. If you’re looking for more advice on leveling your Druid, check out our Druid Leveling Guide.

Descriptions are below, our choices are checked:

There are times when you might want to change talents to better suit a particular fight or situation. Fortunately, changing is easy. Click the new talent in your talent pane, spend one Tome of the Clear Mind per talent, click “learn” and you’re good. 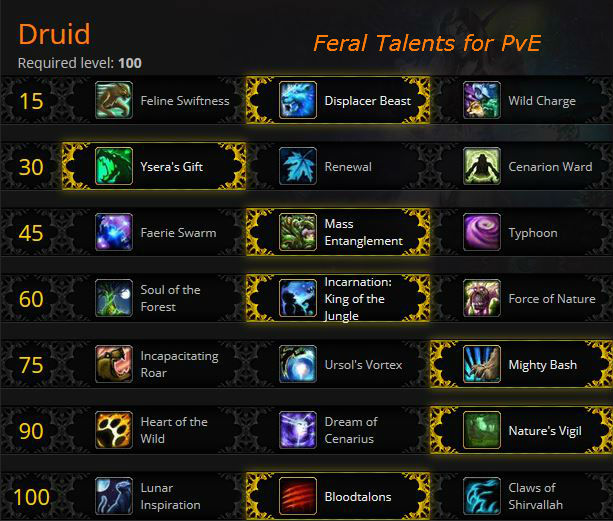 Bosses will scoff at all of these talents, so pick the one best suited for the trash you’ll be facing and your role in the group.

As with the tier 3 talents none of these will bother the bosses, they’re only for trash.

The picks here really depend on your role in the group. If you’re providing assistance other than pure DPS then they’re nice, for example: the occasional off-tanking or healing.

Do you have need of an added DOT? Cast the occasional heal? Or is your role more utility than pure DPS?

Click Here to get Leveled to the cap, Fast

You can also find tertiary stats, such as Leech, Speed, and Avoidance, but these appear randomly on gear and cannot be gemmed or enchanted, so won’t be mentioned further other than to say they nice when you can get them.

Gems and Enchants no longer have Agility (or any primary stat,) so your focus will be on the secondary stats, such as Crit.

Weapon: Use the highest level 2-handed Agility weapon that you can get.

Primary: Agility >> anything else, but you’ll only find it on gear, not enhancements.

Priorities change depending on the exact talents you pick, your gear, etc. Crit is always good, Mastery is good (#1) against multiple targets. Gearing up for Crit and Multistrike is the best general pick, especially since the important targets tend to be singles.

Agility is your Attack Power. Get more whenever you can.

Crit gives you a chance at 200% effect strikes or heals.

Multistrike gives you a chance at a second and third hit/heal at 30% effect. Multistrikes can crit and can proc effects, when appropriate.

Versatility is a add to your damage, your heals, and your damage reduction. Neither of the latter add to your DPS, but might be nice from a survival perspective.

Mastery improves your bleeds, which can add up if you’re spreading them around.

Haste isn’t so hot unless you’re specced into the Lunar Inspiration (tier 7) talent, then it’s better. If you’re fighting groups then it’s on a par with Crit.

Also see the videos, below.

Keep in mind that your #1 priority is always to damage the opposition, unless you group really needs you to fill a larger role of damage and support.

Feral Druids utilize a combo point system and an energy resource, similar in style to rogues. Maximizing DPS depends on properly managing your energy and combo points, maintaining a number of buffs on yourself and various bleed effects on the target(s,) and the proper use of “finishing moves.”

Ideally you will always want to build 5 Combo Points and then spend them on a Finishing Strike, such as Ferocious Bite or Rip. For a variety of reasons gaining those 5 points first may not always be possible. Once you have the 5 points then you will be unable to gain more. Spend them immediately.

You should both try to never let your energy drop to zero or to let it stay at full. In the first case you’re left without the ability to use an ability, in the latter you’re not attacking and so are doing less damage. “Pooling energy” means to let your energy rise to near full, enough to do a couple of abilities.

Keeping 5 Combo Points “at the ready” and/or full energy is a waste of potential damage.

You won’t need to worry about mana, since you won’t be casting very many spells.

Some of your attacks will add a bleed to your opponent. You want to keep these bleeds up 100% of the time. Remember that any stuns/slows have no effect on bosses. Some attacks also will hit harder if your opponent is already bleeding, so always do the bleed first.

Opening Up the Fight

Note: Any DOT or Bleed can be refreshed with about 30% of it’s time remaining and have the remaining time added onto the new DOT/Bleed. Refreshing it before the 30% point does not do this. Aim to refresh things right before they expire.

Using your combo points you should keep Savage Roar applied at all times, preferably using it when you have 5 Combo Points.

If facing only a couple targets, you can simply repeat your single target rotation on both enemies, but when facing 3 or more opponents switch to instead maintaining the bleed effect of Thrash on all targets and otherwise using Swipe as your primary damaging attack.

In Warlords gem sockets are actually few and far between. They have a (small) random chance to appear on Raid gear, there are no meta gems or sockets, there are no socket bonuses, and all sockets that do appear are “prismatic,” which means that they will take any available gem.

The gems are all prismatic, meaning they fit into any socket. None have Int, they all have secondary stats (Mastery, etc.) There are no Meta sockets or gems.

Older (Mists of Pandaria) gems work until item level 600, but the item squish cut them down a bit. What used to be 160 Ag is now 10, for example. The new Prismatic gems are 50 points of Mastery or whatever.

Older gems (Mists of Pandaria and lower) that used to code for Hit now do Crit, gems that had Expertise are now Haste.

Gemming for level 90 or lower gear

If you are interested in gemming any gear under item level 600.

If you’re finding your gemming, repairs, alt funding, etc. to be too expensive then then see our gold tips.

When enchanting your gear you should follow the priorities above, that is: Agility >>> everything else.

Warlords killed off all profession bonuses. You no longer get, for example, two extra gem sockets for taking Blacksmithing, no more crit bonus for Skinning, etc.

As a tradeoff, perhaps, Warlords skills are far easier to level than previously.

made no changes to races or racial abilities and there are no Pandaren Druids.

Warlords removed all racials dealing with Hit or Expertise. A few of these were replaced with new abilities. No new Druid races were introduced, so you’re still unable to race change to a Gnome Druid or much of anything else.

All food buffs last one hour. Any Agility bonuses also add to the food and chemical bonuses.

Agility Foods from the Mists

Videos on “How To: Feral”

The first section covers talents, glyphs, etc. The rotation section starts at about 11:30.

More on rotations, starting at about 6:30 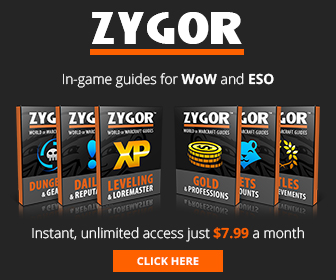 And Ready for Shadowlands!

Leveling your Feral or another alt? Another 100 levels to go? Want to save yourself many days of in-game time and wandering about, looking for the best way to go?

You’ll never again wonder about where to go or what to do. You can focus on the tasks and tearing things to pieces and Zygor will show you everything you need to know to maximize your leveling speed.

You will probably never need to look at your quest log again!
Grab your copy of Zygor’s Leveling Guide, here