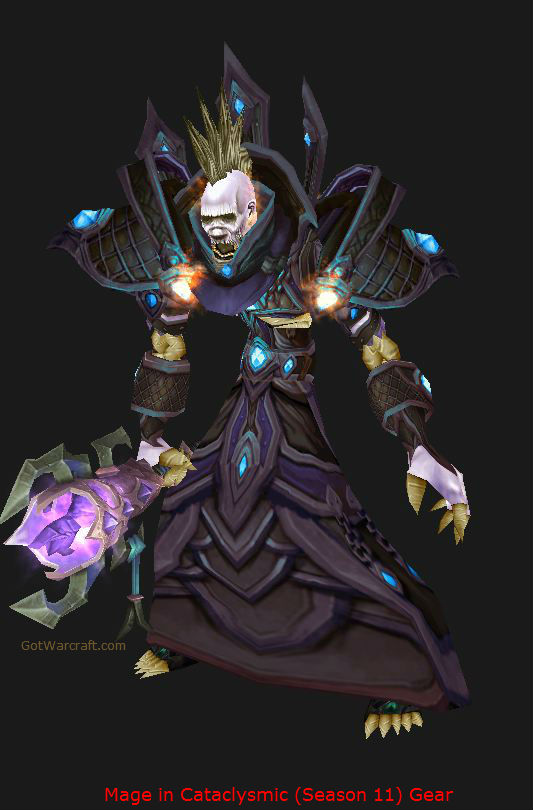 Death to the Living!

Also see our post on the Mage Changes in Warlords of Draenor for all the new, removed, and changed stuff.

Arcane used to be the glass cannon spec of mages, capable of putting out extreme amounts of damage in a very short period of time, but also the most susceptible to being killed in a swift burst due to a lack of survivability tools or escape mechanisms.

Arcane’s greatest strength is in a battleground when it’s allowed to cast uninterrupted. Stay in groups and pick your fights. Battlegrounds will be “Hard Mode” for you, for when you’re bored with Frost. In the Arenas you will need to be very good, very lucky, or have a high tolerance for pain.

Some Warlords Changes for Arcane

For all of the changes to Mage sin Warlords see this post. What’s below is just a few selected items.

Talents can be quickly and easily changed. Just pick the new one and pay one Tome of the Clear Mind. (Glyphs are changed the same way.) Our picks are checked: 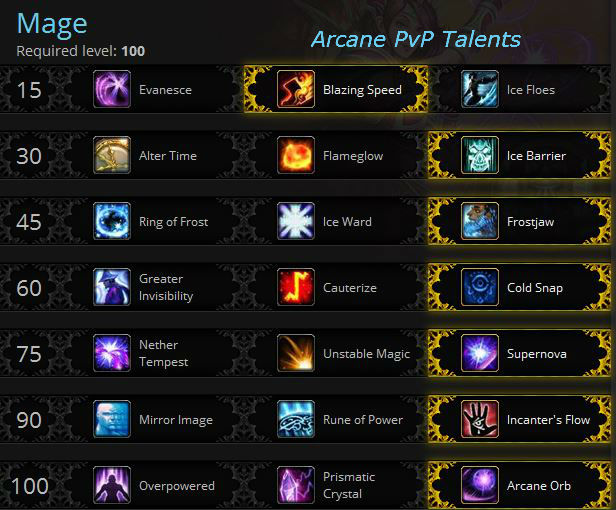 This one really depends on your game. Fighting groups? Then Ring. Duels Vs casters? Frostjaw. Melee? Iceward.

So how do you want to avoid your damage, today?

You only have access to the one Bomb in Warlords, but the other two talents are pretty cool.

These are changed like talents. Drag a new glyph onto your glyph slot, pay the Tome, and you’re set. This makes it easy to set up your glyphs for the situation you’re facing.

Warlords note: Hit, Expertise, Resilience, PvP Power, and Reforging are all dead. Int does not add to Crit, but you start out with a base of 5% to make up for that. You have two new stats, Multistrike and Versatility.

Mastery helps to pump out even more damage. Anything that can help you quickly regain mana, such as potions, will help take advantage of your Mastery.

Haste speeds up everything you do, including cast times. Pile it on, after Mastery.

Multistrike gives you a chance at one or two additional copies of your attack, at 30% power. These strikes can crit.

Crit is hardly a bad stat, it’s just that the others are better. You have nothing that procs off of crit.

Versatility adds to your damage and to your defense. Again, it’s not bad but the others are better.

Stacking stats will be done mainly through gear choices and enchanting. Gem slots are rare. Reforging is gone.

Visit our gold guide for tips on how you can afford to gem up if gold is a bit short.

Gems for offensive use on gear under iLevel 600.

As with the gems, the new enchants only carry the secondary stats: Mastery, etc.

Warlords Notes: The BIG change to professions in Warlords? No more profession bonuses. No more extra gem sockets, not more Int enchants to cloaks, etc. You will not have to go to a trainer to get your skill cap raised to 700, as you’ll find it on a scroll while questing. You willstill have to learn recipes and actually raise your skill.

Best professions now? Tailoring for the high level gear, Inscription for starter end-game weapons, Engineering for useful toys (most of which don’t work in Arena or RBGs.)

Races for the PvP Arcane Mage

Note that race is not a replacement for skill, but some races have certain advantages. Less so in Warlords, now that racials with Hit or Expertise are gone.

Best race? Draenei for the +Int, Humans for Versatility & Escape, Orcs and Trolls for the burst.

How to: Arcane PvP Videos

Arcane Mage in BGs. Some comments on talents, abilities, and diatribes against Feral Druids, along with lots of random blather. He gets some kills, though.

No commentary, but it’s fairly clear what’s going on.

Need to get your mage, or another alt, to the level cap fast? Want to be atop the power curve rather than crushed by it? With thousands of quests and a million mobs to grind the trip to the highest levels can take awhile. A long while. An in-game leveling guide makes the whole trek a whole lot easier.

Pick your starting point and Dugi’s guide will show you where to go, what to do, and keep track of your objectives (such as Kill X of…).  Dugi’s Guide automatically updates and advances as you complete tasks and quests, sets a waypoint arrow automatically (always showing you where to go next,) and includes all the important quest info. You’ll never have another question about where to go or what to do.

Dugi’s does this even if you’ve gained levels in the dungeons or PvP Battlegrounds. Leave off the questing to gain a few levels elsewhere, then come back and Dugi’ss will figure out where you are and show you the best place to go next, automatically. Whether you’re brand new to WoW or covered from head to toe in Heirlooms, Dugi will show you the way to get leveled as fast as possible.

Dugi’s is fully updated for the latest patches of every expansion. With it you will probably never need to look at your quest log again, much less browse some website. Grab your copy here and get leveled fast.

1 thought on “Arcane Mage PvP in Warlords of Draenor”