Earning gold in the World of Warcraft isn’t that big a deal. It’s pretty easy really. You can start with zip, at level 1, and by the time you hit higher level you will be able to spend the gold to buy nice mounts and stuff. By max level you should be doing just fine.

Heck, if the queues are long you can mix your gathering with the battlegrounds PvP or dungeoning. Or even waiting for your guild to get its act together and get started with that raid.

Gathering your Way to More Gold 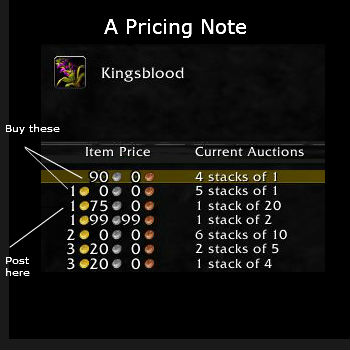 The easiest way to get stuff to sell is with these gathering skills: mining, skinning, and herbalism. Pick any two, but I suggest mining and Herbalism, for the XP.

As for skinning, you’ll be fighting many, many beasts, so you might as well skin them. Keep an eye on the Auction House for prices and focus on stuff that can go for high prices.

Grab whichever works for you.

Speaking of prices, see the images to the right. You can see that if you always post at the lowest price you will lose gold, as shown in the first two images. I usually post my stuff to slightly undercut that first stack of 20. Sometimes someone dumps something for a goodly low price, such as that bit of copper. You might as well grab it. Same as with the Kingsblood shown, even if those prices aren’t goofy low. Clean ’em out and post where shown.

I’ll only undercut them by a silver or so.

Note that with the leather example the lowest price is already for a 20 stack (two stacks.) So that’s where you set your price. (All of the examples are from the Auctionator addon.)

Of your secondary professional skills, Fishing and Cooking can also add to your cash flow. Skip the other professional skills for now. They have a lot of value, but can be very expensive to level up. We want to earn gold here, not spend it (yet.)

Changes to the Game

Mists of Pandaria brought certain interesting changes to the gathering game. You can start your gathering skills in the M of P zones and skill up from there, without ever going back to the starting zones. All you’ll get for awhile is fragments, and you’ll still have to visit the trainer for skill-ups, but you can now do it all in one place. Warlords and Legion are the same.

As of Battle for Azeroth (and into Shadowlands) each zone has it’s own sub-skill to the main profession. So you can get a separate Skinning skill for each zone. Or go into Shadowlands, never having skinned before, and grab the skill and start there. You do not need to learn earlier sub-skills. 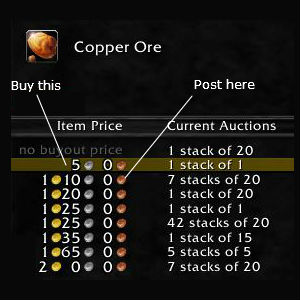 If you boost a lower level character, and already have a gathering profession, then that profession will be raised to the max. You will then be able to go wherever you need to to expand that gold starting allowance you’ll get.

For every player that chooses to do the high level gathering there will be one less player gathering lower level stuff, which may be an opportunity for you.

The Skills You Will Use

Many of the crafting skills use the raw materials that you will be gathering.

Set up an Auctionator shopping list to scan ore prices and then mine whichever item is selling for the best price.

Mining – This is the most reliable gathering skill in terms of the prices that you can get and the demand for the ore. Start in your low level areas and mine copper till you skill hits 50. All ores that you dig up will sell quite nicely on the auction house. Keep them until you have a stack of 20, then sell the stack. Higher level ores will require a higher level skill if you want ore and not fragments.

By the time you’re mining tin you will have collected and sold several stacks of copper and you should have a nice little gold stash. You’ll simply repeat the procedure until you’re mining the top level ores. Keep an eye on which ores are selling for a price that’s worth your time. Then gather more of that ore.

With Mining you can also smelt your ores into bars. Check current prices and then sell whichever commands the higher price at the moment.

Herbalism (aka Flower Picking) is much the same as mining in that you’re going to gather stacks of herbs and then sell them. Get your skill up as high as you can before moving on to the higher level stuff. On some servers herbs sell well at high prices.

Generally herbs will sell for lower prices than ore, but not always. Some, that are needed for the high and flasks and such (eg: Golden Lotus) sell for good prices. Also, if everyone is farming the high level herbs, and undercutting each other, then who’s selling the lower level herbs? You?

Skinning – All the skins sell well, even the scraps, but they might not sell for very much at times. Sometimes there are just too many people skinning, so the supply pushes the prices down. Still, most skins sell very reliably. Keep an eye on the prices, they’ll vary wildly.

With most skinners in the high level zones keep an eye on prices for the lower level stuff. Items such as Thick Leather and Rugged Leather sell well, regardless of expansion, since they’re needed for so many recipes.

Fishing – Any fish you catch will sell, especially if there’s a cooking recipe for it, though the prices might be pretty low. Some though, such as Oily Blackmouth, are required for other professions, such as Alchemy, and so sell for several gold per stack.

Again, make s shopping list in Auctionator and see if any fish are selling for decent prices.

Cooking – Foods restore health and some restore mana and some will actually buff certain stats, such as Stamina. Any of the foods that provide buffs will sell, some very well, and the ingredients can all be gathered, some of them with the fishing skill.

Summing up the Gathering

The advantage, of course, to gathering for gold, is that you’re not spending money to buy (and then resell) items. You’re also not spending tons of gold to buy up a crafting skill. It’s nice, easy, reliable, and will keep in you gold if you keep working at it.

There are other ways to make gold, some faster than the above, but the gathering skills will generate enough gold to keep you in decent items all the way to the level cap.

Work your gathering skills with a little extra loot grinding and you’ll have your Epic Flying Mount soon enough.

Obviously higher level have an edge here, but even low levels can gather enough stuff to keep themselves well equipped.

If you want to keep an eye on the market so that you always know which herbs/ores/skins are selling well (for high prices) now, then you might want to grab this addon.