Leveling Cooking from 1 to 600

Updated for Mists of Pandaria 5.3 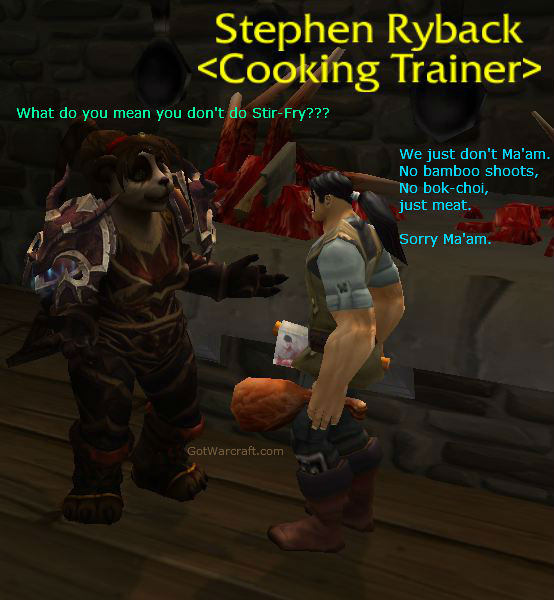 After all, you can buy various foods from the vendors all over Azeroth and Northrend. The foods will heal you up by some amount over 30 seconds or so. Since they’re so readily available why bother with cooking?

For the buffs and the gold. While some foods only heal you (or restore mana) there are many others that will buff your stamina and other stats. At the lowest level you can get something like Herb Baked Egg, which buffs 2 stam and spirit for 15 minutes. At the highest level you can create feats which will heal, restore mana, and buff your entire party for with 90 Stam and 90 in their best stat (in Cataclysm and far more than that in Mists of Pandaria.)

Some recipes are selling for very high prices. Grab them from a vendor and check prices on the AH. You may be shocked. Buying and reselling recipes is a great way for lower level characters to make some pretty good gold.

Foods that provide buffs, or the raw ingredients to certain foods, also command high prices. Clam meat, for example, is way up there at times. Check prices for the ingredients, check WoWhead.com for what drops that ingredient, then go farming.

Like any other skill you will still need to train up at the appropriate skill levels. 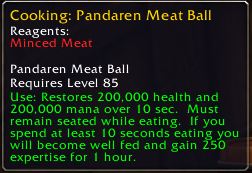 Like the other professions there used to be various quests to obtain certain recipes. Pretty much all of these have been removed from the game (and you might be able to sell old recipes, if you have them, for a pretty nice chunk of change.)

Your trainer has enough recipes to get you going, but there are many more from other vendors and from the daily quests. Some of the vendor recipes are limited items (only a very few available at a time, so check all vendors as you come across them.)

There’s been a change to how cooking awards work. You used to need to do some of the Daily Cooking Quests in Dalaran when you are in the 400 range, then from 450+ all of the recipes were obtained through the Cataclysm daily cooking quests. (These are provided by the quest giver in Stormwind or Orgrimmar. Hand the awards in to the Sous Chef next to the quest giver to get your recipes.)

With Mists all the various old cooking awards have been rolled into one award, which you can spend whereever. Here’s what the Devs say about it:

All (previous) Cooking awards have been combined into a single currency: Epicureans Awards. This not only cleans up your currency list a bit, but means that doing the daily quests in Stormwind can help you buy the Chef’s Hat in Dalaran.

For the Mists of Pandaria there is a new cooking token, the Ironpaw token. You gain those by doing various quests and you use them for ingredients and some perks.

Also, there are now six specializations to lean, in addition to the main cooking skill. Unlike other professions that have, or have had, specializations you can learn all six at the same time. Keep in mind that this means when you’re leveling cooking you will need to gain 600 skill in each specialization to be a master chef.

If you’re able to get to Halfhill Marketplace (whatever your level) and have no cooking skill to speak of, seek out Sungshin. She’ll be able to train you all the way up and will inmtroduce you to the specialist cooks.

You can see details and recipes on our Pandaria Cooking page.

Sneaky tip: If it’s the right time of year and you do the Pilgrim’s Bounty quests then you can easily and cheaply level your cooking to 430 or so , skip almost everything else below, and head straight to Dalaran for the cooking quests. Of course, this will leave you with a LOT of leftover Turkey and fixins… 😉

There is some overlap in the recipes skill ranges, below. This will give you some options if ingredients for one recipe or the other are not available.

Congratulations on your Mastery of the Cooking skill!

Mists of Pandaria has raised the level cap to 90. Be ready and cruise through the new content with Dugi. You’ll never have any doubts as to where to go or what to do. Plus, you’ll be able to get all of your alts leveled quickly and easily, regardless of race or faction. Get yours here.