Freezing Your Way to Dominance

Not just for PvP anymore.

Frost Mages are just fine in Battle for Azeroth (BFA.) You may not top the DPS charts, but you can pull your own weight.

This page focuses on Frost in a raiding (PvE) environment. For Frost PvP (Frost’s real strength) or leveling, see the links just below. If you’re looking for advice on leveling your Mage, check out our Mage Leveling Guide.

Specs can be changed at any time, as long as you are out of combat. Actually talents requires you to be in a rest area (big city or inn) or to use a tome of the quiet mind. This will also let you adjust your azerite essences. Lasts for one minute.

These pics assume you’re in mythic dungeons and raiding and mostly have single targets. It’s mostly the same for groups, but the level 90 row might change. For a Frost Orb build see the video below.

Descriptions are below the image. Our picks are checked: 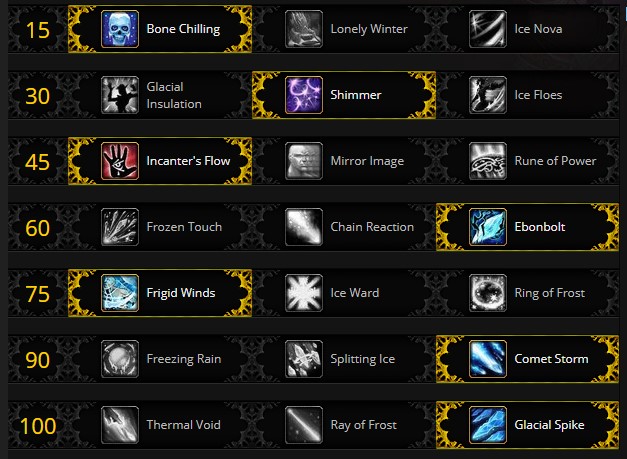 Your stat priorities will vary with your gear, your azerite traits, and your talents and play style. A very general priority will look like this:

Crit: Your Shatter ability makes this a very valuable stat, up to about 33.33%, then it falls off in value.

Haste: Get as much as you can. Then get more. Faster casts mean more procs over time. Your Water Elemental also uses your Haste and so will also cast faster, for more damage over time.

Versatility  increases damage and reduces damage taken, it just doesn’t increase it as much as the others.

Mastery: Frostbolt and Flurry generate icicles and your Glacial Spike uses them. It’s value increases as the number of targets increase.

Tertiary stats sometimes appear on gear that drops (not on gear you buy.) These stats cannot be enhanced or stacked, other than by being lucky enough to find additional items with the same stats. They are: Avoidance, Leech, Speed, and Indestructible.

As mentioned above, all this is based around level 100 raiding, though at least parts can be used for lower level encounters. If you’re not there yet then check out this Zygor review.

Exactly what you do in the opening and the follow-up depends on the talents that you take. Using Ice Nova, instead of Frost Bomb, is a less frustrating rotation.

How to Frost. A basic DPS guide.

Gems and Enchants for the Frost Mage 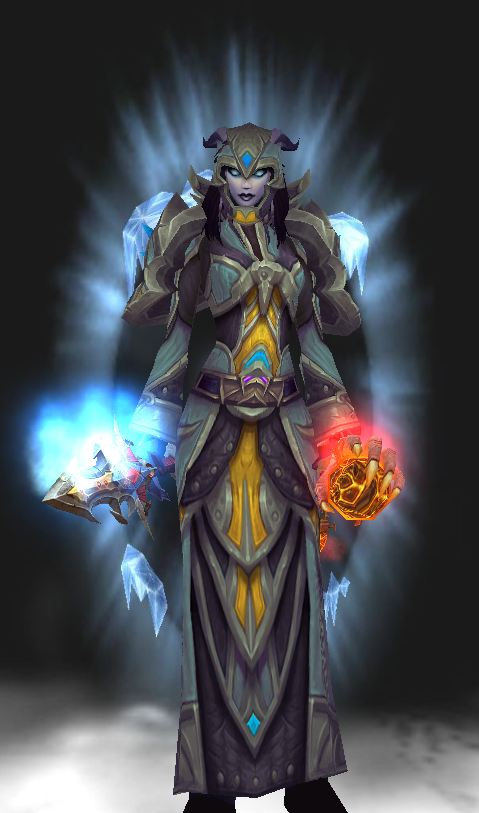 Gems and enchants are much easier than they used to be. In BFA  gem sockets are  uncommon and all sockets are “prismatic,” which means that they will take any available gem. Note that your Mage bonus adds to any Int bonuses, making them worth 5% more Int. That bonus does not add to other stats.

Regardless of how many gem sockets you have managed to acquire, you are allowed only one nice Int gem. Make it: Eye of Intellect for +120 Int.

And then, what are you fighting?

Enchants are fairly easy. These days only weapons and rings. (Used to be nearly ever item of gear.)

Short on gold? If you want to buy the best enchants, fund all of your alts, donate to the guild, etc., but don’t have the cash, then see what the Zygor Gold Guide can do about about fixing your poverty. If you find yourself short of the cash needed to buy expensive gems then you should see this post (old, but still good.)

Gearing up your Frost Mage

Not yet at the level cap?  See our leveling guide.

Dungeons to mythics to raids

Note that Pandarens get twice the food buff.

In Warlords all of the profession perks (added stats) are dead. Professions are just for gear now (and a few misc items,) or the gold.

Tailoring will get you some starting raid gear, Inscription some caster items (staves, off-hand items,) and Engineering has some cool gadgets. You can equip three crafted items, weapons are 630 and armor is 640. Crafted items can have their stats rerolled and these items can be upgraded by 75 points (very expensive.)

Your level 2+ garrison profession building can be assigned a follower, which will both increase the output of your work orders and provide you with some bonus perk.

In BFA the Tauren and Highmountain Tauren are still unable to become mages, but the Pandarens can. Go figure.

As far as racial advantages no race is wildly better than any other.

Since you are already max level you will have your race. If  you are leveling an alt then check our mage leveling page, which covers all the races.

And you can also check out Zygor, just below.

Leveling a Mage or some other class? It’s pretty easy these days,  since Mages excel at quickly destroying things.

Still, there are a lot of quests and a incredible number of things to kill. Wouldn’t it be nice to have a bit of expert help in the “where to go and what to do and how to do it quickly” department?

Zygor’s guide gives you that help, whether you’re Horde or Alliance and regardless of your level, at all times. It’s like having an expert showing you exactly where to go and what to do at all times. It doesn’t matter if you stop your questing to gain a few levels in PvP or the dungeons, you’re brand new to the game, or you’re decked head to toe in heirlooms. Come back to the quests and Zygor will figure out where you should be, based on your new level, and update the guide accordingly. It’ll even let you zap your obsolete quests.

You’re not even locked into any particular build. Zygor’s guide has a talent advisor which will recommend talents regardless of your class or spec, as well as a few other goodies. All in all you’ll blast to 100 faster than ever before.

Freshly boosted to 90? No sweat, Xygor has your back for those last ten levels.

Click here to grab your own copy now, and get to the level cap ASAP, or read our review, here.