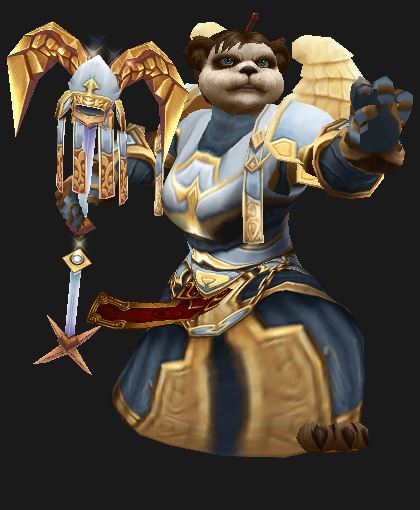 A couple of abilities were removed: Hymn of Hope, Greater Heal has been renamed to Heal (and the old one was removed,) Inner Fire, Inner Focus, Inner Will, Psyfiend, Rapture, Strength of Soul, Train of Thought, Void Shift. A number of other abilities were changes or restricted.

Naturally you have the extra levels and new talents.

See our Priest changes in Warlords of Draenor post for all the changes to all flavors of Priest.

This page is focused on level 100 Holy Priests in PvE (dungeons, raids, etc.,) but lower levels will also find value here. If you’re looking for other specs or leveling or PvP see the links in the Contents section.

In Game Addon Makes Gold Gathering Much Easier, Click Here Now to get Yours

Talents can be easily swapped for other talents. Keep a stack of tomes handy and switch them as necessary. The better you know the fights the better you’ll be able to adapt.

, but other picks will be better in certain situations. 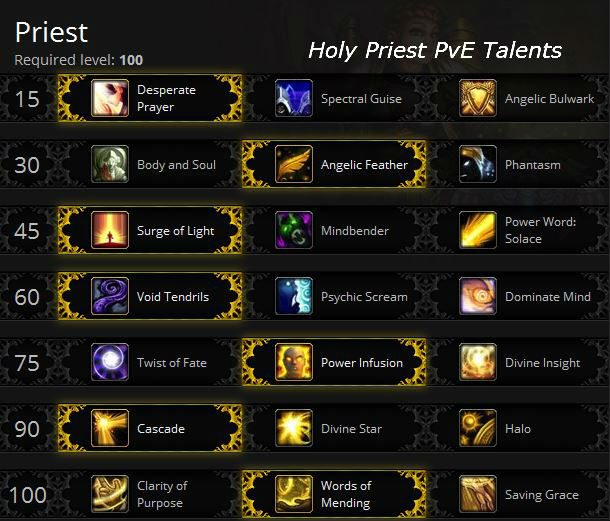 No clear winner here, grab whichever works best for you. If your Mana is good then grab Surge or Solace, depending on your needs.

Doesn’t matter much which one you grab. All three of these are situationally useful at best and unlikely to add much to a fight.

All of these will add to your overall effectiveness, but Power Infusion gives you a burst when you need it.

Cascade is better for larger groups, Halo for smaller groups, and Divine Star should be skipped.

In Warlords you learn a number of glyphs automatically as you level. They are not installed, but they do appear in your glyph list. All other glyhs need to be obtained the usual way, by a friendly scribe or the Auction House. The glyphs you will learn are:

Minor glyphs are entirely cosmetic. Pick any three, they will have zero effect on your raid performance.

In Warlords the Hit, Expertise, PvP Power, and Resilience stats are dead. So is Reforging. Your Int no longer adds to Crit, but you start with a base 5% anyway. You now have an “Attuned” stat, Multistrike, which Blizzard feels is the best stat for “throughput, ” so you get an additional 5% of that stat via your level 90 Divine Providence ability. That ability also improves the effect of all of your Multistrikes.

You also have two new stats: Versatility and Multistrike.

Multistrike gives you chance for one or two additional shots at reduced effectiveness (50% effect in your case.) This can add up to a lot of extra healing.

Haste is really valuable at certain breakpoints, otherwise it just allows you to cast faster and your DoTs to tick faster at the expense of burning your mana faster. At the breakpoints you gain one extra tick on those DoTs or your casting suddenly becomes more efficient due to your cooldowns being more in sync. You can check Totemspot for a list of the Haste breakpoints you might want to shoot for.

Int provides your spellpower and some crit, it does not add to mana pool and has nothing to do with mana regeneration. Also, it no longer adds crit. Since it’s not available through gems or enchants (at level 100) it’s no longer a stat that you can stack, hence the lower priority.

Mastery adds a Heal Over Time (HOT) to your direct heals and their multistrikes.

Versatility is a straight up add to your damage, healing, and your damage reduction. It doesn’t add a lot, hence the low value.

Crit is less useful for Holy than Discipline since you do not get their Divine Aegis effect. None of your abilities get procs or additional boosts from Crits.

Inner Fire should be active at all times unless you need to make use of a number of instant cast spells such as Power Word: Shield and Prayer of Mending in which case Inner Will is a viable option.

Our basic healing spell is Heal which has a very low mana cost but a moderate cast time and healing effect. Use this as much as possible to conserve mana.

Using either Flash Heal or Binding Heal grants you stacks of Serendipity, each stack reducing the cast time by 20% and mana cost by 10% up to a maximum of 2 stacks. This buff lasts for 20 seconds.

Gems with secondary stats have twice the value of those with primary stats, 320 Spirit Vs 160 Int, for example. This will make it worth your while to match socket bonuses, especially if they’re for Int or Spirit.  If you can’t afford the gems you will need to improve your gold stash.

Your Priest bonus adds to any Int gem bonuses, making them worth 5% more Int. That bonus does not add to other stats.

If you need more Mana regen:

Warlords Notes: There are no heady or body enchants, other enchants are only for items under items level 600. There are new enchants for Neck, Cloak, Weapons, and your Rings. Not for any other pieces. (Not yet, anyway.) Your Priestly armor bonus also adds to the Int gained from pre-Warlords enchants.

Pandarens can be Priests, Orcs are the only race which cannot be priests. Big axes and berserk rages somehow disqualify one for the priesthood?

In Warlords all racial abilities for Hit or Expertise were slain in the night by assassins. Some new abilities have appeared. Every race now has something that will add a least a bit to your healing.

The best race choice is the one that you want to play. Your skills will far outshadow any of the racials. That said, here’s a rundown of the racial bonuses.

Pandarens get to choose, once they leave the starting area, whether they will join Horde or Alliance.

Goblin – Holy relics for sale! What? Of course they’re genuine! You calling me a con gob, bud?

Tauren – You have no interesting Priest specific abilities, but some wags might call you a “Care Cow.”

Human – The one, true Priest race.

In Warlords there are no professions bonuses. No special stat boosts that characters without the profession cannot get. The only profession that provides a stat buff, to yourself or anyone else, is cooking (feasts will feed the raid for +75 to their best secondary stat, see Consumables, above, for more.)

Leveling your Holy Priest or any other Priest build doesn’t have to be an exercise in frustration, even with the zillions of quests and regardless of whether you were playing Vanilla WoW (1 to 60) or Cataclysm (to 85) Mists of Pandara (to level 90) or whatever comes next.

Dugi’s comes in the form of a small in-game window which sows you your current quests and goals. Everything you need to know is contained within the guide and is displayed for you and everything is updated as you complete quests. You’ll always have an arrow pointing the way and you’ll never wonder where to go or what to do next, even if you just gained a few levels in the BGs or Dungeons.

Dugi’s makes leveling easy and fun, regardless of expansion, and you may never have to look at your quest log again. Grab yourself a copy and and blast through the levels with ease.