Windwalker Monks are a fine DPS class with very good A of E capability and pretty nice self-healing. Warlords of Draenor brought a lot of changes, check them out on our Monk changes post. 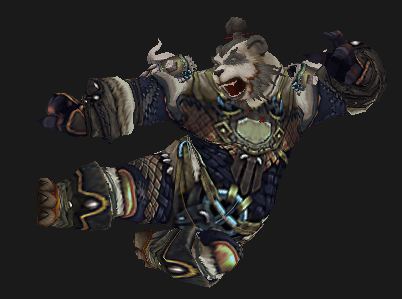 This Windwalker Monk guide is primarily intended for use at level 100, for PvE content and Raiding. However, the principals will still apply during the leveling process and somewhat for PvP, though talent picks and rotations will differ somewhat. If you want the same in-game step by step leveling guide that we use to get to level 100 as fast as possible, take a look at our favorite in-game leveling guide:

Talents can be easily swapped as necessary, whenever you like. Keep a stack of Tome of the Clear Mind handy for such changes (ditto for glyphs.) 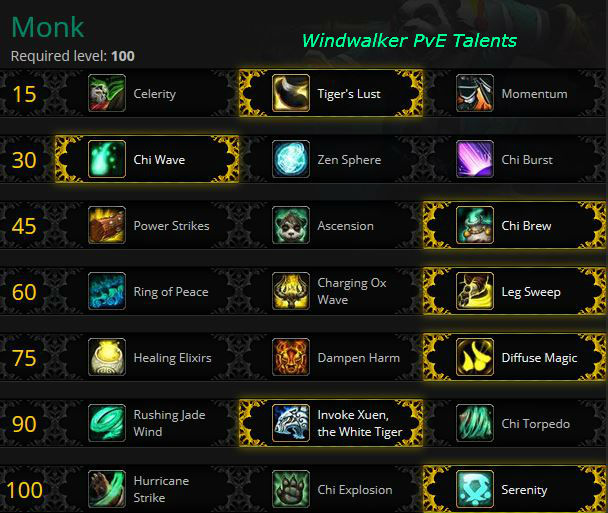 The choice for this tier is largely preference based. Tiger’s Lust offers the greatest speed increase, but also has the shortest duration. The other two improve your consistent mobility, but can’t be cast on other players.

At lower levels of Haste go with Power Strikes, at high levels Ascension wins out. Chi Brew can help when loading up your Brew stacks and Chi for that next burst.

None of these are effective against bosses.

Healing Elixir offers consistent healing, but is inferior to Dampen Harm and Diffuse Magic when dealing with heavy burst damage. Either of the two damage mitigation cooldowns is useful depending on the type of damage you’re taking.

Glyphs, like talents, are easily changed depending on the situation. Grab any that look like they might be interesting. (See our gold pages if the price is a bit high.) There aren’t really any required glyphs, but there are several that are quite useful in particular situations. Once you know the fights you’ll be able to pick and choose as necessary.

Major Glyphs, Not necessarily in order of preference:

Hit, Expertise, Reforging, Resilience, and PvP Power are all dead. You have two new secondary stats, Versatility and Multistrike. You get +5% of the latter from your level 90 Battle Trance ability.

Multistrike gives you two chances at an additional attack/heal at 30% effect. Multistrikes can crit.

Haste will give you faster energy regen, as well as casting. At some point you may find yourself capping your energy too often, which is not wasted energy.

Crit scales well and syncs well with your various abilities.

As mentioned at the top of the page this rotation assumes that you’re level 100. (well, you are raiding, right?) Just in case you still need to get leveled, go here.

You should always use Stance of the Fierce Tiger.

The secondary gems have twice the value of primary gems (320 Haste Vs 160 Ag.) It’s worthwhile to match socket bonuses, especially if they are for Agility. If you want to match a socket bonus the you can use an Orange gem in a yellow slow, and purples in the blue slots. If you’re short on gold then see our guide.

Your Leather bonus adds to any Ag. gem bonuses, making them worth 5% more Agility. That bonus does not add to other stats.

Make sure you have your Hit and Expertise first, 7.5% each. Then gem for Haste until your energy regen is around 12.5. After that go for Crit. Some Hit/Exp gems are shown in case you need those last few points.

Gemming for Gear under iLevel 600:

Short on gold to buy all your goodies? Most of the enchants below have similar enchants available, of lesser value, for less cash. Check with the rep vendor or the Auction House for these. If you want to buy the best enchants, fund all of your alts, donate to the guild, etc., but don’t have the cash, then see what the Tycoon Addon can do about about improving your situation.

Only your Neck, Cloak, Weapons, and your Rings have Warlords’ enchants.

Comsumables for the Windwalker Monk

Note that Pandarens get twice the food buff. All food buffs last one hour. Any Agility bonuses also add to the food and chemical bonuses.

All of the profession bonuses have been removed in Warlords. No more extra sockets or Ag. buffs from profession perks.

So what are they good for? Earning gold and/or making your own starting raid gear, of which you can equip only three crafted items at once time.

Race Choices for the Windwalker Monk

In Warlords all racials that had Hit or Expertise are now dead.

Worgen and Goblins are the only races which cannot become Monks. The most that any particular race will provide in term of DPS is maybe 1% overall, not enough to care a lot about. Still, if you want every bit of burning power for your flying kicks here’s how they stack up.

Once upon a time, while leveling, you had to look up quest details on some website. There was no in-game help and you had to trundle along as best you could. That was when there were only 60 levels.

Now we have the new(ish) Monk class, 100 levels, thousands of quests, and a bazillion mobs to kill. Whether or not you’re playing a Monk that’s a daunting task.

Brand new to WoW? Decked head to toe in Heirlooms? Mixing up questing with PvP and/or dungeons? No problem, Dugi has your back all the way from level 1 to the level cap, or whichever level you start from. Dugi’s in-game guide is always quickly updated for all patches and expansions, so it’s never obsolete.

Grab yours here and get leveled fast.