Hit Caps and Other Stats

Update 4/24/14: Everything on this page will be obsolete when Warlords of Draenor launches. Hit and Expertise will be removed from the game and there will be a number of other changes to stats.

… One thing that might be of help, especially to players like myself that play casually but still want to get good geared avatars would be a guide to the numbers and caps. Wowwiki has helped me a lot, but the notion of caps, how to know when they have been hit, how to reach them and how to avoid wasting enchantments and buffs unnecessarily would be great. I’m sure I’m not the only one with this gap in my knowledge.

So What Are These Caps? 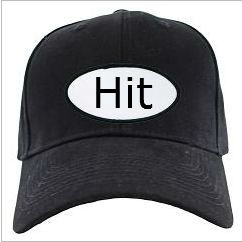 Note: While the discussion below is aimed at level 85s it also applies to lower level characters, though you won’t have as many options for stat tweaking and won’t really have to be concerned with caps. (If you need to get to 90 ASAP talk to Dugi.)

See below for the caps and stats table, updated for Mists of Pandaria.

The easiest way to think of a cap is this: What point does it become ineffective to get more of a stat? Take Hit rating, we’ll want to know what our Hit caps (not to be confused with Hip Cats

) are in order to be most efficient with our reforging, gemming, etc.

(Ratings are shown in two ways, as a percentage and as points. As an example, you need about 120 rating points for +1% Hit rating, 600 points for 5%. I’ll use percentages. See the chart below for the other stats.)

When swinging your one or two-handed weapon or using your special strikes (not spells or Dual Wielding) the basic chance to hit an opponent of even level is 97%. If you have 3% Hit Rating then you will never miss an opponent of the same level (though the strikes can still be blocked, parried, etc.)

Opponents that are higher level than you are harder to hit, those lower are easier. Raid bosses are considered to be level 93 so you need 7.5% to avoid missing with those weapons.

In level 90 PvP opponents are all the same level, so your basic melee Hit is 3%.

A soft cap is the point at which additional rating has lesser value, though still some.

A hard cap is the point at which you get zero additional value from that stat.

For example: A rogue’s Sinister Strike requires 7.5% Hit rating to never miss a raid boss (ignoring debuffs.) Additional Hit will still help with poisons and melee strikes (your “white damage,”) but has zero value for your Sinister Strike. This means that there is an 8% soft cap for your Hit rating.

Against a raid boss:

Spells (poisons) are a bit different. The base chance to hit an even level opponent is 94%, not 97, but the miss chance grows larger faster than for melee. For a level 93 raid boss the miss chance is 15%. This means that your Hit cap for spells is 15%. You get no value from Hit rating greater than that (unless you’re under some kind of debuff.) That means that there is a hard cap of 15% for your spells, you get no benefit from additional Hit.

Your Hit rating effects your 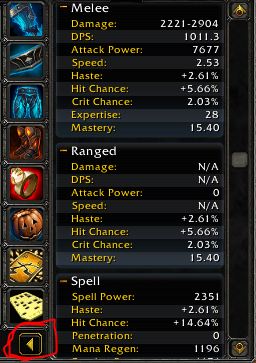 Melee, Ranged, and Spell hit. One stat fits all. It used to be that Spell Hit was a separate stat, but no longer.

Note that in Mists of Pandaria your Expertise adds in to your Hit to form your Spell Hit. Some classes also have any ability that adds Spirit to the Spell Hit rating. (example)

This screen is from a level 85 Protection Paladin (before Mists of Pandaria.) Prot Pallies get a bonus to Spell Hit,  hence the 14.6% Spell hit on this one. (You can see this screen on your character by clicking the arrow in the red circled area.)

For a Prot Pally, the Melee Hit Cap is 7.5% and spell is 15% (for a raid boss.) Above those levels there is zero value to additional Hit. Anyone Dual Wielding (Fury Warrior, Frost DK, etc.) would still get some benefit from Hit up to 27%. It might not be their best stat at that point, but it would still be of some use.

If this character was a Mage (or other caster) then an optimal Spell Hit would be that same 15%.

Healers don’t need Hit to heal, but they do for interrupts and anything else they cast on the opposition.

For level 90 PvP, since the opposition is even level, the Melee Hit cap is 3% and Spell Hit is 6%.

Getting to the Cap

The whole point of reaching the caps is, of course, to be as efficient as possible. If you have no wasted points then, everything else being equal, you’ll be more effective at what you do.

The easiest way to reach any given cap  is through your gear, but in most cases you’re going to have too much of one stat and not enough of another. This is one reason that Reforging was introduced. This allows you to move some of one stat into another. You can only change one stat per piece of gear. Generally you should reforge in order to tweak your stats, rather than Gem or Enchant.

Here’s how to work it out. Assume you have whatever set of gear and you need to shift a few things around. As an example, let’s say that your stats priority is something like this (for a PvE Cbt. Rogue:)

By the time you’re looking at gemming and enchanting you will already have your talents figured out and should have already reforged your gear and you will probably be pretty good on your most important stats.

Your gems and enchants are then gravy that provide extra effectiveness.

This table is for Cataclysm and is a bit off for Mists of Pandaria numbers. Still, it should give you an idea of how these things work. The numbers on the class guide pages are all correct.

Some of these stats came from Wiki, others from ElitistJerks. Stats junkies will find all kinds of numbers on the EJ page.