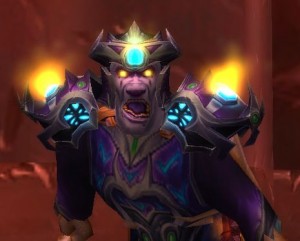 Is there any value to a Destruction PvP build? Yes. There are Destro ‘locks in the top 100 ranks of Arena. Good enough. Let’s get started.

See our main Warlock PvP page for tips, the DPS page if you’d really rather raid, and our Warlock leveling page if you need to get a bit higher in the level department, first.

The 6.2 patch does not directly affect you, though it hit the other two specs pretty hard. You lose some damage from Corruption and your Shadow Bolt, but that’s about it. The Warlords changes were more interesting, see those here. 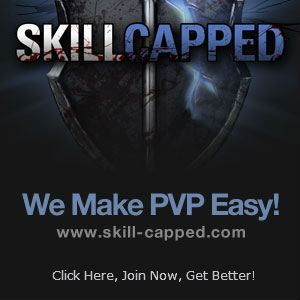 Crossed off talents are pretty useless for Destro PvP. All the others have at least situational use. 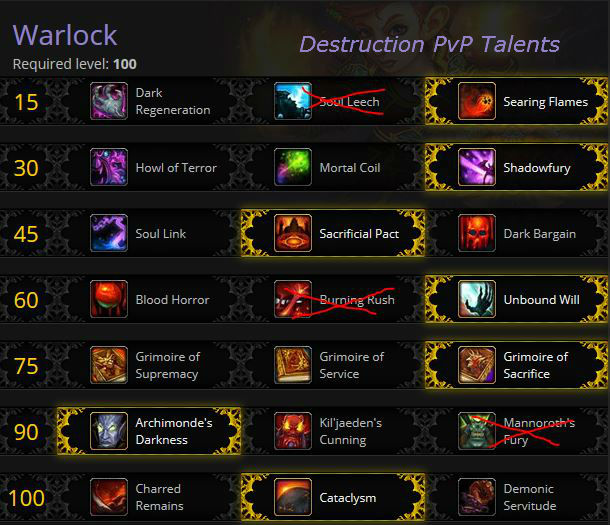 DR = Diminishing Returns. The second (or third) CC of a type has half the duration of the previous one of the same type. So stun #1 might last 6 seconds, #2 (any stun) lasts half as long as normal, #3 is half that.

Mortal Coil for Arena and Shadowfury for more general PvP

Get better: Skill-capped has a lot of great stuff for Warlocks. Videos, forums, etc. Join up and get better!

Most of these are just cosmetic, so grab whatever you like. A few do have some use, though.

Look for gear with Crit & Mastery, or Versatility if only one of the pair is available. Try and avoid Multistrike and Haste.

Crit helps you to generate Embers.

Versatility increases all damage (not nearly as much as Mastery, though,) self-heals, and your damage reduction.

Multistrike gives you one chance at an additional 30% attack.

Haste just doesn’t do much for you and doesn’t scale well.

There is no PvP gemming in Warlords Season 1 or 2. The sockets do not exist on PvP gear.

If you’re using a PvE piece with a socket then gem for Mastery. There are no Warlords gems with primary stats (such as Int.) There are no socket colors or meta gems.

Enchants are only available for Neck pieces, rings, cloaks, and weapons. There are no Int enchants, only the secondary stats. Look for Mastery on all of these enchants. The weapon enchant is Mark of Bleeding Hollow, the others are all Gift of Mastery.

PvE Gear? Maybe. PvP gear has two ratings, one for PvE and one for PvP. Season 1 honor gear, for example, is 620/675. If your PvE piece then is 675 then it’s just as good (assuming equal stats.) If it’s higher, or has better stats, then it’s better. If it has a gem socket then and is only 670 then it’s better.

PvE pieces might also have +Avoidance or +Leech or another tertiary stat. PvP gear does not.

As for trinkets you definitely want the PvP trinkets as they come with 15% damage reduction.

Honor gear has two choices for every slot, with different stats, and the Conquest gear has three. For the pieces that would have a set bonus, though, only one choice of the three has the bonus.

The Set Bonuses are:

Another set bonus is from your PvP trinkets. If you equip two then you get a 15% damage reduction Vs players.

For the Conquest gear the third option requires Revered rep with your home faction. The other pieces, and the honor pieces, do not require rep. Again, only one choice has the set bonus, and it may or may not have the best stats.

Note that Warlords Season 2 gear is Warmongering. That shouldn’t change much about the stats or gearing order.

The Actual Pieces – honor pieces will be the same, except for the rep pieces. Gloves are your “off piece” of the set pieces. Simeilar pieces will be available in patch 6.2, just with the warmonger prefix.

How to Burn Them Down

Stack stuff properly and your enemies will die screaming.

This video covers talents, glyphs, rotations, and a bit of arena work.

Doing some damage in the BGs. No “How to” here, just a Destro ‘lock putting down some big numbers.

In Warlords all of the profession bonuses are dead. No more Cloak Enchants that adds Int or AP. No more Blacksmithing sockets that add extra gem sockets. They’re all gone.

Warlords professions are a lot easier to level, though. And the crafting professions can make raid quality gear and upgrade it to the top tier, such as item level 715 in patch 6.2. That won’t quite match the Conquest gear, but it’ll be real close to the honor gear. The catch is that it’s extremely expensive to level the gear to 715. Cheaper to do the honor/conquest gear.

Your garrison profession building, with follower, will let you create materials faster and give you access to some cool stuff.

All of the gathering professions, since the profession bonuses are dead, are just for the gold of gathering mats for crafts.

Race choice is pretty simple, play what works for you. If you really want to be efficient then play a Human.

Orcs, Gnomes, Undead, and Trolls are the next tier and the rest are, well, the rest.

Certain macros are very helpful in bundling abilities, targeting enemies, and so on. Go here if you want to learn about creating macros. Bind each macro to a key and then use the key instead of clicking the enemy nameplate and then clicking the ability.

You should make as many, or few, of these as work for you. Each is a separate macro. Note that ‘@arena1′ is the same as ‘target=arena1’. You can also use these to attack your focus or mouseover targets. In theory you could make a set for every targetable ability you have, but start with one or two and go from there.

Will cast Banish on an enemy pet. Mouseover it and hit the key.

This will cast Havoc on your mouseover target or, if there isn’t one, on your main target. You can also make one for your focus target by using ‘@focus’ or ‘target=focus’.

How to Get your Warlock to the Level Cap, ASAP

Warlock leveling is pretty easy, regardless of spec, the only question is how to do it all quickly. And then you have those other alts you want to level though those 100 levels.