Marksmanship Hunters are less reliant on their pets than Beast Mastery hunters, but their overall damage is comparable. This page covers Marksmanship in a PvE setting.There will be a few things changing with Warlords of Draenor. Some notes will be in the guide below, but you can see our post for all of the WoD Hunter changes. There will be some pretty significant changes for Marksmanship.

This Marksmanship Hunter guide is primarily intended for PVE use (raiding, etc.) at max level. However, the principals will still apply at lower level. If you’re looking for advice and tips on leveling you Hunter then check out our Hunter Leveling Guide.

For leveling or PvP see the links just below.

Keep a stock of Tome of the Clear Mind is your bags and change talents and glyphs to best suit the particular situation. The better you know the fights the better you will be able to custom pick talents to suit the situation. These picks are our choices for the best general use, though some situations might call for different picks.

Getting to the level cap, if you’re not yet there, is painless: Zygor’s guide will help you get there quickly and easily.

Descriptions are below the image. 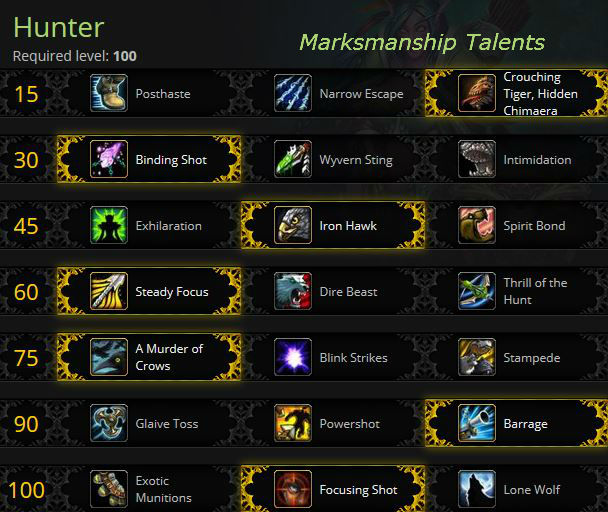 None of these have any use against bosses, but they can be nice against trash.

Gettin’ in some healz…

Any pet can be either Tenacity, Ferocity, or cunning and you can switch their specs at any time (out of combat.) Ferocity is generally the best choice as it provides the greatest DPS gain, but there may be situations where Tenacity or Cunning might have use.

For raid buffs and useful effects see this Pet Utility Table or see WoWhead’s list. In Warlords the Crowd Control abilities are largely gone and the former table does not include Draenor pets. Pick your pet so that the abilities it brings to the table complement those of the group. Its buffs/debuffs won’t stack with those of your team so choose wisely.

There have been various changes to pet abilities in WoD and the level 100 talent, Lone Wolf, will give you a chance to operate without a pet. See here for the pet changes.

Warlords of Draenor bring a couple of changes:

Your Stats, in order of priority:

Agility is your best stat as it’s a direct increase to your attack power. It no longer adds Crit, however.

Crit is well loved by all Hunters, especially MM. Get more. At 90 your Lethal Shots ability gives you 5% more, for a base of 20%. 40% Crit gives you a 100% chance to crit (via Careful Aim) with your Steady, Focused, and Aimed Shot or while your Rapid Fire buff is active. Add another 3% for bosses and that’s your 43%. Once the boss (or target) is below 80% health then Careful Aim no longer applies to the shots and the value of Crit drops. Your Aimed Shot crits will still grant you 20 focus (from your perk.)

Multistrike gives you a chance for extra, weaker, strikes. You get two chances at an additional strike at 30% effect (that 30% being based off a new roll and not that incredible crit you just got.)

Versatility is an add to your damage, any healing you do, and also to your damage reduction (at half value,) which will make your healers efforts a bit easier.

Mastery is not as useful as the other stats at this time as “Standing Still” is often not a useful thing to do.

Warlords of Draenor will change your rotation somewhat. Here are the changes relevant to this section: Arcane shot is now MM and S only, you no longer have access to it, Hunter’s Mark is dead, Serpent Sting is now Survival only, but your level 100 Exotic Ammo talent can duplicate the effect. The level 100 talent Focusing Shot, if you take it, will replace your Chimera Shot and your Steady Shot, Stampede is a level 75 talent. More MM changes

Focus is your resource and you’ll want to pay attention to it. Letting it drop so low that you can’t cast an ability when you need to is a bad idea. Letting it sit at max means that you aren’t shooting, which is bad for your DPS. Try to slow down just enough to be able to fire your shots as the become available (off cooldown.) Waiting for your focus to recover enough to get these shots off is a net damage loss. Focus is regained passively and by using your Steady Shot or your Focusing Shot (level 100) talent.

Your Mastery requires you to stand still for three seconds before getting the buff. There are times when this will be easy and other times when it just won’t happen (though more in PvP than raiding.) You DO get a sort of “fudge factor” in that if you move slightly you get a 5 second buff that provides the same effect. Stand still for the last three seconds and your Mastery triggers when that buff expires.

The various abilities here are mainly for trash.

Stuff (Buffs) to Keep Up:

Killing Stuff: aka: Your “Rotation”

If the target is above 80% health use Aimed Shot as your primary damaging ability due to the Careful Aim passive which increases the critical strike chance of Aimed Shot, Steady Shot, and Focusing Shot by 60% on targets above 80% health.

Once the target is below 80% wait for Rapid Fire and then cast Aimed shot as much as possible during the buff.

When facing small groups (fewer than 6) simply continue to use your single target rotation, and…

The Bombardment effect triggers when Multi-Shot critically strikes, increasing Multi-Shot damage by 60% and reducing the focus cost by 25 for 5 seconds, allowing you to more effectively spam the ability.

Gemming info for lower levels is included for those who might actually have that gear.

Short on gold? If you want to buy the best enchants and gems, fund all of your alts, donate to the guild, etc., but don’t have the cash, then see what the Tycoon Addon can do about about improving your situation.

Note that Pandarens get twice the food buff. All food buffs last one hour. Any Agility bonuses also add to the food and chemical bonuses.

Agility Foods, from the Mists

In Warlords: All combat bonuses have been removed from professions, the profs will be for flavor and gold making only.

“The Best” profession are the ones that will let you make your own starting raid gear. In your case that’s Leatherworking (armor, ilevel 640) and Engineering (your gun, ilevel 630.) If your interested in doing this then your garrison will be a big help in generating materials for those items. You will also be able to upgrade your items (two steps, 25 points total) and “reroll” stats not to your liking (you want Crit and Multistrike.) The upgrades cost quite a bit more than the original. 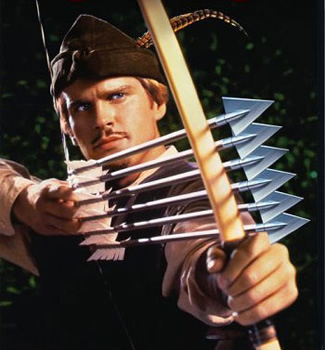 With Catalclysm everyone but Gnomes were allowed into the Hunter crowd. Probably because they’re too busy repairing their city or they’re too short to use a bow (how about a Gnomish X4500GT Zarkomatic blaster rifle?)

In Mists of Pandaria Pandarens can become Hunters. but Gnomes are still out.

In Warlords of Draenor the Gnomes are still left out. All abilities dealing with hit or expertise are gone. All races now have something  that adds to your DPS.

Orcs and Trolls are “the best” from a DPS viewpoint, with their damage cooldowns. Draenei now have an Agility bonus, which is a nice plus.

Worgen – Extra Crit is nice, as is Sprint (DarkFlight) , making them the best Alliance DPS.

Of the horde races we’ll begin with the Blood Elves

Trolls are one of the better races for Hunters, with Berserking

Orcs, are also a contender for the #1 Hunter choice from a DPS perspective. with Blood Fury and pet damage. WoW’s in game quest helper is a nifty gadget, showing you where to go and giving you some idea of what to do. What it doesn’t show you is the most efficient path to take among all the bazillion quests and it misses a lot in the “where to go and what to do” department.

Zygor’s guide misses nothing and shows you the best path to take, whether Horde or Alliance, at all times, and eliminates all doubt and confusion. You will never again have any doubts about the best path to follow to get to the level cap ASAP.

Zygor’s has boosted its Int stat and, as a result, it doesn’t matter if you stop your questing to gain a few levels in PvP or the dungeons, you’re brand new to the game or you’re decked head to toe in heirlooms. Come back to the quests and Zygor will figure out where you should be, based on your new level, and update the guide accordingly. It’ll even let you zap your obsolete quests.

You’re not even locked into any particular build for best results. Zygor’s guide has a talent advisor which will recommend talents for either Marksman, Beastmastery, or Survival, depending on what you like. About the only way to get to the level cap faster is to buy a character boost for a measly $60.

Check it out, grab your own and blast to the level cap, even in Shadowlands!