How to Create Macros

So What’s a Macro?

Someone asked this on our Facebook page and I thought that it would be worth expanding on somewhat,

“can someone explain what a “macro” is…and how to put one together. It always seems like some characters are on automatic mode when in pvp or pve….just wondering. I’ve never done one before.”

A macro is just a set of commands that you can bundle together. Instead of hitting three or four or five keys to apply buffs and set up for a fight, just hit one key and it’s all done. (BTW – macros are used in many games and in various forms of coding, outside of any game application.)

Here’s How it Works

Type /macro into the chat area or hit the ESC key, bring up that menu, and hit the macro button. You’ll see a box like the one below, but without all the pre-made macros. 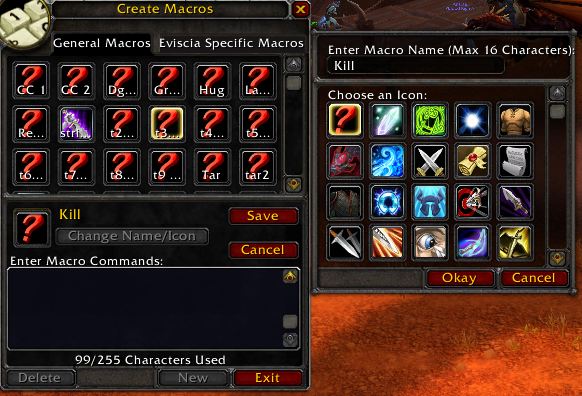 Hit “New” (at the bottom) and a side window will pop out. Click the ‘?’ icon, enter the name of the macro (I entered ‘kill’) and hit OK. The smaller window will go away and you can enter your macro text into the ‘Enter Macro Commands” area (see example of the text below.) Notice that my Kill macro shows at the lower left.

Once you’re done creating your new macro, hit Save and you’ll see the question mark change into a new icon.

Here’s an example which I grabbed from one of my macros.

This is an example of what you might enter into the macro commands box, just copy and past if appropriate:

#showtooltip makes sure that Ambush shows when I hover over the macro icon with the mouse pointer.

The /cast lines are casting various abilities or directives. You can use spells, buffs, abilities, any number of things.

The /use line is for items like trinkets, the example shown is a PvP trinket that adds a bunch of Agility when used, which lasts 20 seconds. This trinket is entered after Ambush because it breaks stealth.

Drag the icon for this macro onto your action bar, where it will look like the regular Ambush macro. When you use that button it will cast premeditation (for a quick two combo points) pick the target’s pockets (ewww… soiled linens…) and then whack him upside the backside. After that it will activate the PVP trinket.

What this does is put a skull icon (raid icon) on top of your target (it doesn’t work on players.)

If you’re hunting for particular mobs enter their name where it says NameOfTarget (using just the first few letters of the name will work fine.) The macro will try to target that mob and then put a skull (raid marker) on it. You can also click or tab to a target, hit the macro, and the skull will appear. This is great for dungeons and marking targets. ‘8’ determines that the marker is a skull, different numbers will create different icons.

If your group is a bit clueless and having problems attacking the right target, you can try this:

That will put the skull on the target and then you will shout, “Kill the guy with the fraggin’ skull!!!”

My character with Inscription uses this macro:

So instead of multiples clicking and pointing at herbs you just hit this macro over and over and it mills them right up. It’ll will look for herbs in the order listed and if it doesn’t find any it will move to the next herb. One kink is that if it finds a stack of 1 through 4 herbs it will get confused and stop. All your heb stacks have to be in multiples of five for this to work.

You’ll see macros posted here and there on other sites and we have a few in the various guides on this site. Just copy and paste them, play with them, feel free to tweak a bit, and you’ll eventually find yourself becoming more effective.

This video will run through much the same stuff, add some details, and run through some Hunter specific macros.

This next video will lay out how to set up a cast sequence, allowing you to cast multiple spells with one button. This is great if you have a specific rotation, not so useful if you have to cast depending on the situation (arena PvP for example.)

You should be able to get some good stuff out of this one regardless of what you do, for example, if you always a pair of spells or cast a series of buffs.

Here’s a transcript of the video

WoWpedia has a list of all of the different macro commands. They also have a macro guide that covers some basics. It’s somewhat out of date, but the concepts and basics are good, it’s just a few details that might be off.

They also have a page that’s an index to all of their macro pages, including pages with class specific macros. Some of these will be out of date (or way out of date,) but you should be able to get some useful stuff.

In-Game widget makes keybindings and macros easy,
click here to get yours.

6 thoughts on “How to Create Macros”