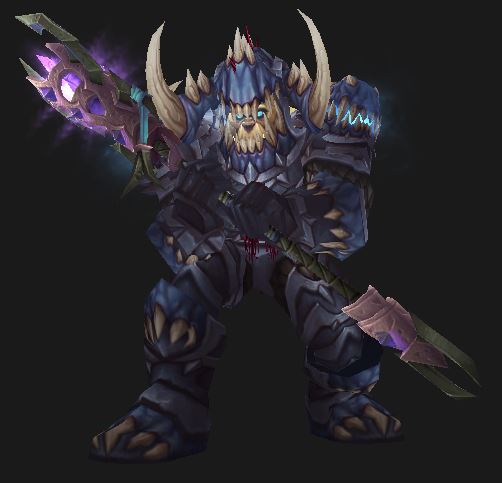 Blood Spec Death Knights make for fine tanks. Self-heals, nice defensive cooldowns, and decent damage and threat are all there. Maybe they require a bit more skill than other tanks, but that’s what makes them interesting.

Note that this page is for Blood PvE (tanking, instances, raids, etc.) see the links just below for leveling or PvP.

This Blood Death Knight guide is primarily intended for use at the level cap. However, the principals will still apply during the leveling process. If you’re looking for advice on leveling your Death Knight, check out our Death Knight Leveling Guide.

If you want the same in-game step by step leveling guide that we use to get to the level cap as fast as possible, even in Shadowlands, take a look at our favorite in-game leveling guide.

Need to change up a bit? Your talents can easily be changed IF you’re in a “rested XP” area, such as your garrison, an inn, or the big city. You can change your spec (go Frost or Unholy) any time you’re out of combat, but for the individual talents you need to get to the rested area. no special items are required for changing either spec or talents.

If you are in the raid/dungeon, or out in the world, and need to change talents before the next fight? From 51 to 60 you can buy or make (with Inscription) a stack of Tome of the Still Mind.   Not yet 51? Use a Tome of the Quiet Mind. Either will give you one minute to switch up. 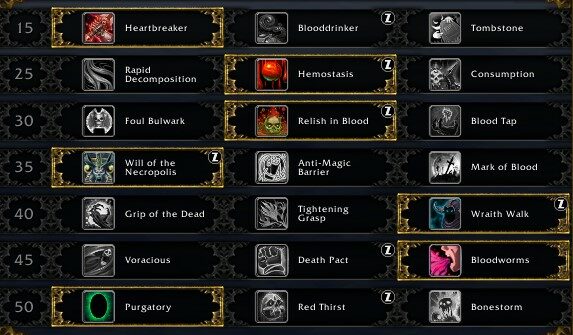 The choice here really depends on the fights you are setting up.

All are solid, your pick depends on what you need. Are you mostly fighting groups? Singles? Need to dodge that big, tank-crushing damage?

Once upon a time the Glyphs were required, but then Legion did away with pretty much all useful glyphs. Those that remain are entirely cosmetic.

Nothing like a bloodier looking Anti-Magic shell to improve your tanking, right?

This puts survival more in your own hands, as opposed to random number generation. It evens out incoming damage helping to eliminate the big spikes. It also helps your DPS and threat, which is useful.

An Item level upgrade (with Str and Stam) will generally be superior, regardless of stats, especially if it is 10+ levels better.

Diminishing returns: Let’s say you want to stack a ton of Versatility. Keep in mind that past a certain point each additional point of the stat will be worth a bit less that at lower values.

Keep in mind that stat values are actually pretty close.

Scroll down for the rotation/priorities. Abilities and notes are covered first.

WoWhead has a tanking guide that you might find interesting, here. There’s another one in the Battlenet forums. It’s old, but much of the info is evergreen since it’s not talking so much about specific abilities.

Runes are no longer Blood, Unholy, and Frost, they’re just runes (like Death Runes, before Legion) and any ability that uses runes uses them.

As the tank it’s your job to maintain aggro on all appropriate enemies (an off-tank might be assigned to grabbing adds, for example.) When new mobs appear you should either grab their attention (threat) or someone else should be responsible for that task.

You will need to be very alert to everything that’s happening with regard to the boss or the trash/adds.

If a mob, any mob, decides that you’re boring and would rather eat the healer then it’s your job to get it back. You need to both maintain and reacquire aggro on all mobs you’re responsible for. Whatever your team does to pull aggro it’s your job to counter it and grab it back. Note that you’re not responsible if someone goes wandering off and grabs aggro on his own.

As much as is possible, know the fights. Position the boss to minimize the impact of his abilities, try to move him is such a way that your group (especially) can maintain proper contact.

All of your offensive abilities will generate significant threat. A ranged attack will work to get a mob’s attention if your taunt or grip is on cooldown. (These abilities are unchanged in Legion.)

As Blood you have the Veteran of the Third War ability up at all times, and it provides additional Stam and Armor.

You have several damage mitigation abilities, most of which are fairly short in duration (3 to 8 seconds.) This means that you will have to have pretty good timing to get the most use from them, as they aren’t so useful after the damage spikes hit. The better you know the fight and the more alert you are to the current situation (incoming death, adds, etc.) the easier this will be.

You also have some Offensive Cooldowns

Note that moving out of damage and away from big strikes that you can see coming is often your #1 damage mitigation ability.

Outside of using cooldowns and such, the Blood tank “rotation” is fairly simple: Diseases, Death strike, Marrowrend, and Blood Boil.

Socketed gear pieces are not common, but they do occasionally appear. Drop a Strength gem into the first and Versatility gems into all the rest.  Not yet max level? Get similar gems at lower levels. If the Str gem is not “unique” then go all Str gems.

These are a lot easier than they used to be. In BFA you can only enchant your weapons and your rings. These are Shadowlands numbers.

Not yet max level? Here is a list of enchants you can use for lower level work.

Gotta eat right? Might as well get some stats, too. The seconds # is for Shadowlands.

Can’t afford enchants and such? You should go here.

In order of preference. 1st number is for BFA, the 2nd for Shadowlands. Flasks last an hour and also last through through death. Potions are good for 25 seconds.

Professions now are for the gear and/or the gold. Most have something that can be used as starting raid/pvp gear or sold.

If you’re leveling? Get Herbalism and mining for the XP.

You’re already at max level, so yeah, this is for your next alt.

None of the racials are very important to tanking ability save perhaps the Night Elf 2% dodge increase or the Orc Blood Fury cooldown. All races can become Death Knights. You can see more race detail on our Death Knight Overview page.

How to Get your DK to the Level Cap, ASAP 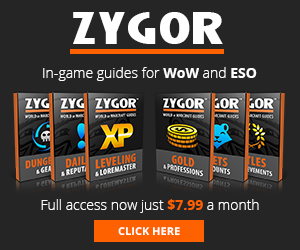 Death Knight leveling is easy. All specs work well, pick your favorite, regardless of which spec you choose you will find leveling to be easy. Even Blood. Not so much damage, but rounding up a large group and burning them down to walk away with full health has its points.

Still, there are thousands of quests and a bazillion mobs to kill (not to mention other players, but they don’t count here.) Sorting out which quests are best and which series of quests will get you to the cap the fastest is another game, which is why we highly recommend Zygor’s Guide.

Playing with Heirlooms and/or Recruit a friend? Gaining a few levels in the dungeons or in PvP? Zygor’s Guide has your back. The guide knows what level you are and will correctly suggest where to go next and will let you dump all of your obsolete quests. You will probably never need to look at your quest log again.

Grab your copy here and get to the cap as fast as possible, even in Shadowlands.