As they say, you are a master of death and decay, spreading infection and controlling undead minions to do your bidding.

This Unholy Death Knight guide is primarily intended for PvE and Raiding at max level. However, the principals will still apply during the leveling process. If you’re looking for more advice on leveling your Death Knight, check out our Death Knight Leveling Guide.

Your talents can easily be changed IF you’re in a “rested XP” area, such as your garrison, an inn, or the big city. No reagents, trainers, or special rituals required. You can change your spec (go Blood, to Frost, back to Unholy) any time you’re out of combat, but for the individual talents you need to get to the rested area. As with changing specs, no special items are required for changed talents. So if you want to DPS one fight and then you need to tank the next one, or try unholy because it looks like a bitter fit, then switching is easy.

If you are in the raid/dungeon and need to change talents (or Azerite Essences) before the next fight? Buy or make (with Inscription) a stack of Tome of the Quiet Mind. That will give you one minute to switch up.

Our general picks are checked,

, but do note that you might want to change now and then, depending on the particular fight. 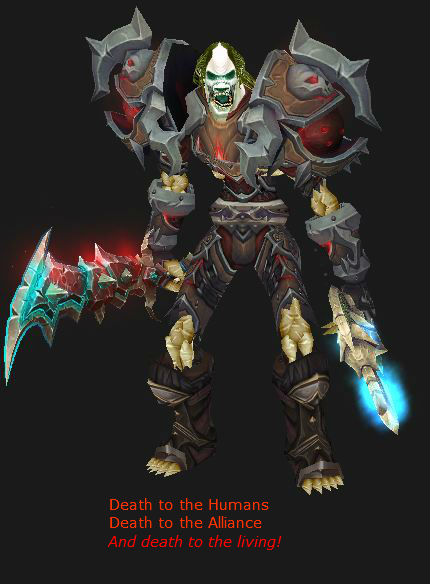 This pick really depends on the set of fights you’re about to enter.

Legion pretty much did away with almost all of your glyphs. The only ones remaining are cosmetic only, like the old “minor glyphs.”

Nothing like changing your ghoul’s appearance to improve your DPS, right

Strength improves everything you do. All your attacks are based on it.

Mastery boosts your Shadow damage, which is pretty important to Unholy.

Crit is simply a damage boost. The Castigator talent allows more Festering Wounds, and more bursts, from your crits.

Versatility is a small add to your damage, healing, and damage reduction.

Haste lets you do everything faster, including your attacks, disease speed, reducing cooldowns, and so on.

Click here now to get your Unholy self to Max Level ASAP!

Your diseases base their damage off of your Str and whatever buffage you have at any given moment. Keep them on your target(s) at all times and when the buffs proc your diseases will adjust accordingly.

The goal here is to have your empowered ghoul up as often as possible.

Note: Defile hits harder than Scourge Strike if your target will last long enough and is stationary, so should be used on cooldown, even against single targets. Save it if adds will be coming in shorty, so you can attack all of then with the Defile.

Sockets do exist on some items in Legion, such as on Ancient Maelstrom Amulet. If you do find yourself with sockets to fill, then this should be your priority (use similar, but lesser, gems if you’re cash poor:)

In BFA you can only enchant your rings and weapons. In your earlier levels you can enchant other gear, which is great when leveling. Enchant all your heirlooms.

If you want to buy the best enchants, fund all of your alts, donate to the guild, etc., but don’t have the cash, then see what the Zygor Gold Addon can do about about fixing your poverty.

It used to be that any gives profession would give you a bonus to your best, or some, stats. Blacksmithing, for example, would give you two extra slows for your gems. No longer. There are no special bonuses.

Professions now are for the gear and/or the gold. Most have something that can be used as starting raid/pvp gear or sold. Some of the professions, eg: Engineering, have really useful items for leveling and world events. They’re not usable in raids, however (sigh.. no firing rockets at the boss…)

Note that Pandarens get twice the food buff. All food buffs last one hour and provide only one stat.

Get Your Death Knight to the Level Cap ASAP

Unholy Death Knights to a ton of damage and have solid defenses, so leveling is going to be easy.

Still, there are thousands of quests and a bazillion mobs to kill (not to mention other players, but they don’t count here.) Sorting out which quests are best and which series of quests will get you to the cap the fastest is the issue, otherwise you can waste a lot of time running hither and yon, getting nothing useful done. This is why we highly recommend Zygor’s Guide.

Zygor’s is an in-game guide and it almost automates the whole leveling process: you just pick your starting point, whatever level you are, and the guide tracks which quest you’re on, tracks the quest objectives, and automatically advances and updates as you complete your tasks and quests, and switches to the next quest you need to do.

Playing with Heirlooms and/or Recruit a friend? Gaining a few Unholy levels in the dungeons or in PvP? Zygor has your back. The guide knows what level you are and will correctly suggest where to go next. It will also help you to dump all of your obsolete quests (if you want to do that.) And you will probably never have a need to look at your quest log again.

Grab your copy here. And yes, Zygor will be 100% ready for Shadowlands.