The Auction House Alt – Make More Gold With a Banker

Ok, you have your mining and skinning skills together and you’re working them hard. Maybe your other alts have all the crafting skills, maxed.

You’ve got a ton of sellable stuff, at least you hope it’ll sell, and it’s time to get the stuff onto the Auction House. So do you stop what you’re doing, run back to town, hope on the nearest bird-like thing, and fly to the capital city, then the Auction House, post all your stuff, and then travel all the way back to your looting fields? Or mage-port to the city and then find your way back?

Or do you just dump it all into the nearest mailbox and send it to your banker alt (mule) and get right back to the looting/crafting/raiding?

Yes, there is a better way than flying back to the big city after every loot run. The mule. No, not the four legged kind, which isn’t available in WoW anyway. This “mule” is just another character that you don’t bother to level up much. It can also be called your Bank Alt (Alt = Alternate Character.)

One upon a time, before the creation of the bank a mule was a character used to store excess stuff. They’re less necessary these days, but sometimes one just has too much stuff…

Simply put, you create the character, level it up to 5 or so, and then run it to the nearest AH where it’ll spend the rest of its career. Why level 5? Because then you can get Enchanting which will allow you to disenchant low level items, which can make a nice cash flow by itself. Or just keep it at level 1 and do the disenchanting on your higher level chars.

Select a name for this character that is easy to remember and type, because you will be sending mail (items and money) to this character from all of your other characters on the same server and you don’t want to send your stuff to the wrong character by mistake! Names full of special characters make mailing stuff to that character awkward. Names like “Phredd” are good. The one in the pic is Clearlynot.

I recommend not naming this character something silly. Skip names like, “Bobsbank,” “isellstuff,” and so on. Just give it a regular name, the random name generator in the character creator is great for this, as long as you can remember the name, and don’t connect it to your main character at all.

Then add this mule character’s name to the friend list of all your other characters, which will avoid all future miss-sending of mail. Yes, I’ve done that (facepalm.)

Once your character is ready then you run it to the nearest city, Stormwind or Orgimmer, any place with an Auction House. Stay on the main road, keep your eyes open for things that will kill you, and you should be safe enough. Any big city will do, but Storm and Org make it easier if you want to buy/sell through the trade channel.

When your mule arrives in the city you should station it by the mailbox nearest to the AH. Now, whenever your gathering character’s inventory is full of good loot to sell you only need to travel as far as the closest mailbox, instead of travelling to the AH.

Obviously you will want to get the largest bags possible for this alt.

Horde-side I actually like Silvermoon city, at the west Auction House, instead of Orgrimmar. There is a mailbox about five feet from the auctioneers, the bank is nearby, and the crowds are nill. Alliance side I like Stormwind for the same reasons, except the crowds. Ironforge is good and the Exodar is a Ghostland. Feel free to use whichever city you prefer.

Send your mule enough money to get started, as it costs money to list items on the AH, and send it everything that isn’t grey. (Grey items are almost always sold to a vendor.)

How to Use Your Alt

Make lots of gold, your way.
Click here to start.

One alt can be the central banking station for all your characters on that server. They all send loot to the mule/banker to sell and most of the cash is kept on that character. Need an item? The banker buys it and sends it to the appropriate character. All the cash stays in one place which makes it easy if I need to send gold or items to one of my characters or to a friend.

You can store heirlooms (if they have enchants on them,) bind on account gear, and those armor tokens from the Timeless Isle or Tanaan or your Shipyard (in addition to sellable loot.) Send the gear to your other characters as they require it.

Buy the biggest bags as soon as you can afford them, they’re generally the best price per slot. Go ahead and buy whichever is the Big Bag of the Moment (32 slots in Shadowlands.)

All other gear the mule character might have is then sold or banked (if you ever want to play that character again.)

Need more space? Consider making (or buying) your own private guild, with just your banker. Offer gold for signups and then kick everyone when the guild goes live. Buy a couple more guild bank tabs and you will have lots of storage space.

Every once in a great while someone sells a guild in the trade channel, which is where I bought mine. It’s easier than running around and collecting signatures. Well, since you only need 4 signatures these days just offer some gold for a signup, with the understanding that you will kick everyone after your guild is official.

Dressing for the Occasion 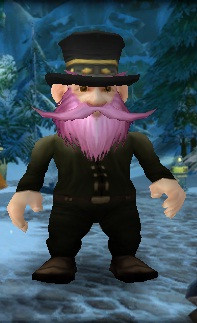 Dressing up just adds distinction to your banker. There’s no reason that you can’t run around in a Tuxedo, dress, or fancy outfit. Various styles of clothes are available, in addition to the regular gear. Obviously high level characters have the gear advantage, but even a level 1 can wear a Tux. You can get it made by a friendly tailor (or an unfriendly one, if you have enough gold) or just buy it off the AH.

Some people use the costumes from the various seasonal events, such as the Pilgrim’s outfit. Use your imagination.

Addons for Your Bank Alt

Auctioneer – See our Auctioneer page. Not as essential as it once was, especially with Auctionator and Zygor out there, but still pretty nice. It does some deep digging and analysis of what’s happening on the AH.

Auctionator – Create shopping lists, easily cancel auctions where you’ve been undercut, and more. Pretty nice. Much faster scanning than Auctioneer, though not as deep.

Altoholic – store stuff on your alts and this addon helps keep track of the stuff. Guild, Bags & Inventory, Mail, Professions, and Quests & Leveling. Got lots of alts? Then check it out.

Bulk Mail Inbox – Bulk mail reception made really easy. This addon allows you to selectively pick mails to open from the inbox, open all mails with money or open all items. It displays up to 50 items in one window, with info on each item. This is very nice if you’ve made a lot of sales, since the window will be filled with gold print.

Zygor – This slick addon is more important than all the others put together. It’ll scan the Auction House, research the economy on your server, and tell you just exactly what you need to do to make a ton of gold. It will also save you a ton of research work. Get your Zygor Gold Guide here.