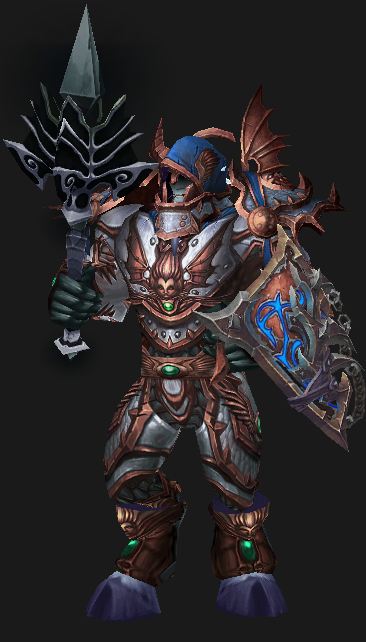 Note that this guide is oriented toward level 100 players, though lower levels should be able to get  quite a bit from it. If you need to get to the level cap  then our recommendation is either dungeon leveling, PvP leveling (slower,) or grabbing a leveling guide to speed you along your way.

There’s a pretty fair amount of flexibility with Holy, depending on whether you’re in 2s, 3s, 5s, BG, who your teammates are, your personal style, and so on. This page is a general Holly Pally PvP guide, rather than being specific to Arena 2s, for example.

Gearing Your Paladin in Warlords.

This is a video from Skill Capped on general gearing in Warlords. (Check ’em out, here.) It’s not specific to any one class, rather it gives you an idea of how the system works this time around.

Also see our Holy Paladin Gear Guide for more info and tips on gearing up.

These are for general situations, feel free to switch up for specific situations (duels, BGs, arena, etc.). Just make sure you have a stack of Tomes always ready. Descriptions are below the image and our picks are checked:

Note that all of the talents have uses, none are bad. Actually a nice place to be. 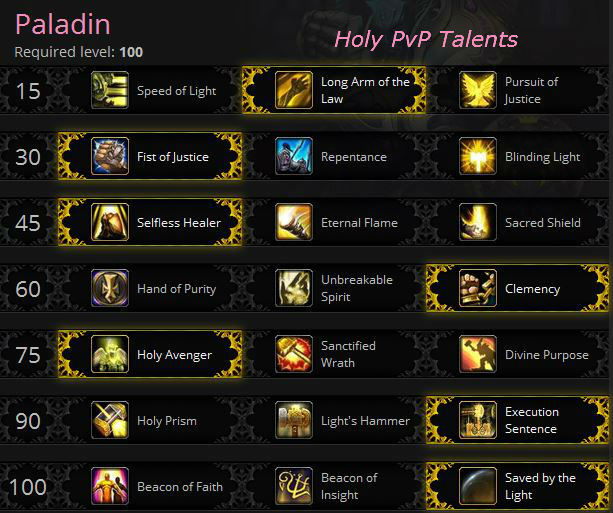 What kind of CC do you need, today?

All have their uses, but Spirit and Clemancy will be your “go to” talents mostly.

You get several glyphs that are learned automatically. These are:

More or less in order on interest.

Warlords notes: Int no longer provides any crit rating, but you do start with a base 5%. At level 90 you also get an “Attuned” stat (this is the stat that Bliz think will most increase “thoughput”,) so you’re starting at 10% at 90+. This +5%, from all sources, comes from your new Sanctified Light ability.

Your general stat priority is:

Intellect increases your spell power and chance to Crit with spells. Increasing Intellect will increase your healing throughput and your heals will return more health to your target per spell.

Critical Strike, or Crit, is another decent stat to accumulate for a Holy Paladin. Critical Strikes when using Holy Shock activate our passive Infusion of Light.  The reduced cast times on Holy Light, Divine Light, and Holy Radiance makes topping off you and your teammates much easier, and can make a huge difference in how a PvP encounter plays out.

Haste  reduces the cast time of your abilities and reduces the duration of the Global Cooldown (the minor cooldown that is invoked after casting spells). Haste helps to ensure your important spell casts go uninterrupted (Holy Light, Divine Light, etc.), an important factor in PvP, as there are several interrupt mechanics in the game.  Although beneficial, the reduced cast times do not justify allocation out of other important secondary stats.

Versatility increase both your offensive damage and healing, as well as lessening damage taken. Again, it doesn’t help much if you can’t get spells off.

Mastery –  Holy Paladins benefit from Mastery: Illuminated Healing, which creates an damage absorb shield on targets you cast direct healing effects on.  This increases Holy Paladin throughput by a decent margin, as the overwhelming majority of Holy Paladin healing spells are considered direct healing. The value is lessened because the shields aren’t strong and you can’t shield anything if you can’t get your spells off. Mastery is more valuable if you are not being trained.

Multistrike gives you a chance for one or two additional heals (or attacks) on your spells, at 30% effect.

Spirit  – While mana efficiency is pretty solid for Holy Paladins, Spirit helps to ensure your mana pool is not depleted over the course of a PvP encounter. If you’re always full up on mana then get rid of some of your Spirit, in favor of Mastery or Crit.

Grab this addon if you need more gold for your gem, gear, enchant, mount, and toy buying.

There is no PvP gemming. Maybe next season.

Gemming for gear under ilevel 600:

If you’re leveling or hanging around a lower bracket then this will be a good gemming set up. If you’re much lower level then you can use similar gems. Remember that your Plate bonus adds to any Int gem bonuses, making them worth 5% more Int.

Warlords Notes:  Unlike Mists and previous expansion you cannot enchant most of your gear.  There are no head enchants, all shoulder enchants come from the Inscription profession and are only for items under items level 600.

Professions for the Holy Paladin

Profession bonuses are all dead in Warlords. Get them for the gear or the gold. If you already have a ton of gold you can buy crafted ilevel 640 or so gear off the auction house, available for level 91s. This will give you a good start into your PvP game, until you can get the PvP gear.

Learning the crafts and making the gear yourself will take a lot of time and save you most of that ton of gold.

Engineering is probably the most useful profession, especially if you do world PvP.

Since the Paladin is such a versitile class it’s hard to say which race is “best.” It really depends on what your game is. Humans might arguably be “the best,” at least for PvP, with their escape ability allowing two DPS/Healing trinkets.

Bothered by pesky undead critter sent by that DK over there? This will help. Works best if only one of the things is attacking.

General macro targeting you or a party member. Great if you’re running arenas. Make one for yourself and another for each party member, where applicable. You’ll see several examples below.

The following macros and comments were grabbed from the WoW Forums.

“First off is targeting macros, instead of clicking your party frames you should use these, you’re going to become a better healer, better at line of sighting CC as you’re not looking at your party frames. Do this for all your arena partners and put them on a handy key I have my scroll for targeting(Scroll up and down).”

You can also use ‘arenaX’ as your target, X being the 1-5 of your opponents in the arena. Use ‘@arena1’ or ‘target=arena1’ etc. Use the name of your teammates for friendly macros.

I use the same keybind for dispelling my arena partners but together with a Shift modifer so I’m using Shift Scroll up / down for dispelling, you should have a macro to dispel yourself aswell.

Simple macro to use Health stone as well as our mini Shield wall, I shouldn’t have this macro as you tend to use the DP for the sprint and not defensive, so if i’m not topped it’s going to use the HS :p

Yep, I use 2 of these macros aswell as normal keybind to bop, you don’t have to but it comes in handy to BoP blinds etc.

I use 3 of these macros as well, what I do to keep them all in my head is put them on a keybind that I can remmeber, freedom for example is CTRL – 1,2, and 3.

Simple focus rebuke, can come in handy if you’re standing next to a Mage that just blinked in to sheep you.

See the second video on our “how to macro” page for making a “cast sequence” macro.

Grabbed from the WoW Forums.

Discussion of Holy Paladins in Warlords.

How to Heal as a Holy Pal (in Arena)

This video is not updated for Warlords (It’s for 5.4 Mists,) but there are some good tips on positioning, strategy, etc. Not just rotations, though those are in there, too.

How to Get your Paladin to the Level Cap, ASAP

Retribution Paladin leveling is easy. Holy and Protection have it a bit harder, just due to the utter lack of damage. So if you’re questing then switch to Ret, unless of course you’re leveling another class.

Any way you want to look at it, there are thousands of quests from to get to 100 and a bazillion mobs to kill (not to mention other players, but they don’t count here.) Sorting out which quests are best and which series of quests will get you to 100 the fastest is another game, which is why we highly recommend Zygor’s Guide.

Grab your copy here and get to 100 as fast as possible, or read our review, first.