Battle for Azeroth and the up and coming Shadowlands. Plenty of stuff to burn down, you pyromaniac.

This Fire Mage guide is primarily intended for use at Max Level in dungeons and raids.  If you’re looking for advice on leveling your Mage, check out our Mage Leveling Guide.

At certain times you might value one talent over another, such as if you will be fighting groups or singles. You can change then in a rested XP area (such as a city or Inn,) but for in dungeon/raid use you should keep a stack of Tome of the Clear Mind handy for easy talent switches. BTW – that same tome will also let you rearrange your essences.

Descriptions are below the image and our picks are checked: 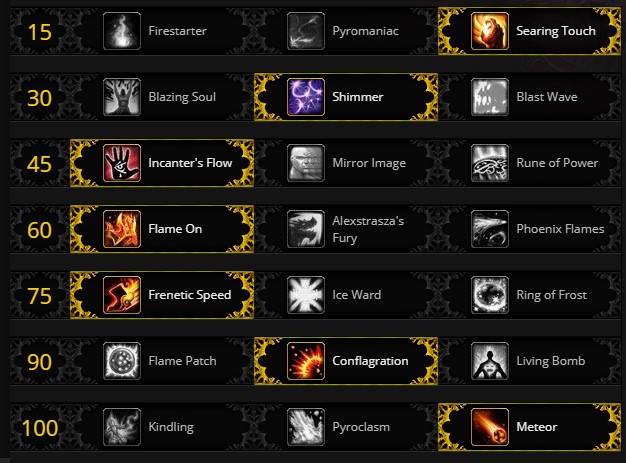 This will depend on your gear, azerite traits, and corruption. The numbers are very close for most gear levels and most fights. For fights with a bunch of targets Mastery rules because everything is burning.

Crit: You have one big reason to pile up the Crit: Pyroblast! procs. That’s where a lot of your damage will come from.

Mastery: Your target burns, damage over time, from all of your various fire attacks, so it’s a solid damage add. The more fire you can lay down on the target the more damage you’ll get from Ignite. Your Combustion copies your Ignite, so the bigger your Ignite the bigger your Combustion DOT.  Note that the more targets you have the more burnination there is so the more value Mastery has.

Haste does reduce cooldown and cast times and increases how quickly your DOTs tick.

Versatility adds to your offensive damage and your defense. It’s a straight up damage add.

Tertiary stats randomly appear on PvE gear. You cannot gem or enchant or otherwise stack them, but they are nice when you get them. They’re worth maybe a couple of gems. The stats are: Leech, Avoidance, Speed, and Indestructible (your gear piece, not you.)

If you still need to get leveled, go here.

The NeedToKnow addon from Curse will help you track your ignites, Living Bomb, and such.

If you’re using Rune of Power then drop at just before the start of the fight. Also quaff your Draenic Intellect Potion just before the tank pulls. That way you will be able to use a second one during the fight.

Your primary attack spell is Fireball, though Scorch can be used if you need to be moving.

Heating Up (HU) is triggered by critical strikes with any of the following spells: Fireball, Pyroblast, Frostfire Bolt, Scorch and the guaranteed critical Inferno Blast. Use IB right after you get an HU proc.

Whenever you have a Heating Up proc cast Inferno Blast if possible for the guaranteed critical effect and therefore the automatic trigger of Pyroblast!. Cast Pyroblast whenever Pyroblast! triggers.

Keep Casting! You should always be casting and queue the next spell before the cast is done.

Ideally you’ll have both Ignite and the Pyroblast DoT effects active on a target before using Combustion.

Opening Up for Incineration

Gems and Enchants and More for Fire Mages

Gems and enchants are much easier than they used to be. In BFA  gem sockets are actually uncommon. All sockets are “prismatic,” which means that they will take any available gem.

Note that your Mage bonus adds to any Int bonuses, making them worth 5% more Int. That bonus does not add to other stats.

Regardless of how many gem sockets you have managed to acquire, you are allowed only one nice Int gem. Make it: Eye of Intellect for +120 Int.

As for the other gems, what are you fighting? If you’re mostly blasting groups, then gem Mastery, masterful. Otherwise Crit or Haste. Quick Sand Spinel (+50 Haste) or Deadly Lava Lazuli (+50 Crit)

Enchants are fairly easy. These days only weapons and rings. (Used to be nearly ever item of gear.)

Short on gold? If you want to buy the best enchants, fund all of your alts, donate to the guild, etc., but don’t have the cash, then see what the Zygor Gold Guide can do about about fixing your poverty.

You might be better served by using the professions to build a larger gold stash. Leveling a Mage or some other class? It’s pretty easy these days, since Mages excel at destroying things. Still, there are a lot of quests and a incredible number of things to kill. Wouldn’t it be nice to have a bit of expert help in the “where to go and what to do” department?

Zygor’s guide gives you that help, whether you”re Horde or Alliance and regardless of your level, at all times. It’s like having an expert showing you exactly where to go and what to do.

It doesn’t matter if you stop your questing to gain a few levels in PvP or the dungeons, you’re brand new to the game, or you’re decked head to toe in heirlooms. Come back to the quests and Zygor will figure out where you should be, based on your new level, and update the guide accordingly. It’ll even let you zap your obsolete quests.

You’re not even locked into any particular build. Zygor’s guide has a talent advisor which will recommend talents regardless of your class or spec. All in all you’ll blast to the level cap faster than ever before.

Click here to grab your own copy  and quickly blast to the level cap, even in Shadowlands, or read our review, here.

6 thoughts on “The Fire Mage DPS Guide, Watch Them Burn!”