Outlaw Rogue PvP in the Legion

Updated for Warlords of Draenor
Some Legion updates. More coming.

In Legion Outlaw is just fine and may even be “the best” PvP spec as Warlords Season 1 starts. Subtlety is about bone-crushing burst out of stealth, but Outlaw is about sustained DPS and has it’s own serious burst. 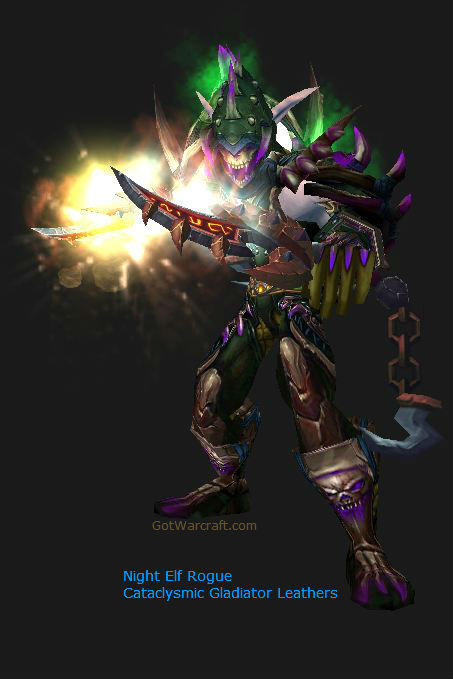 For all the Rogue changes in WoD, go here.

The PvP Outlaw Rogue, in Brief

Quick notes for the Outlaw Rogue. Most of this page assumes that you’re level 110. (If you’re not, then go here.) Lower level Rogues can still use much of the material here, so read on and grab what you need.

This section is a summary of Outlaw in PvP.

Stats: For all roles: Agility before everything else, Mastery and crit are the weakest stats for DPS.

In Legion you talents have a couple of small, mildly interesting changes.

So here are the regular talents. Descriptions are below the image and our picks are checked: 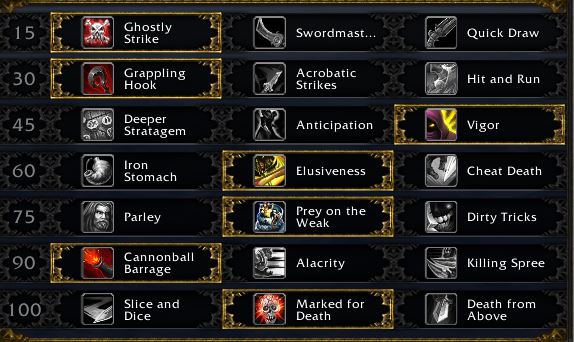 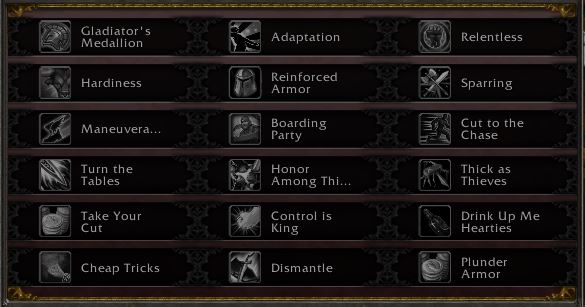 In Legion your Glyphs are dead. Not totally, there are some minor glyphs which are purely cosmetic. None have any combat value.

Lose some and gain some. Here are the abilities you have  in Legion, or at least in the Pre-Patch.

In Legion, as soon as you zone into a PvP instance, the stats on your gear will be nullified, and you’ll be given a pre-determined set of stats that’s uniquely configured for your specialization. Furthermore, any set bonuses, enchants, Legendary bonuses, or trinket effects will be deactivated (although your Artifact and its related Artifact Powers will remain active).

The only contribution your gear will make to your overall power is through a small modifier based on your average item level. For every point that your average item level increases, your pre-determined PvP stats will increase by 0.1%. That means a 25 item level difference between two players only results in a 2.5% difference in stats, compared to the 25% difference it makes today. There’s still a little incentive to improve your gear – a concept we think is important for World of Warcraft – but the benefits are much less pronounced.

Warlords of Draenor note: Hit, Expertise, Resilience and Reforging have all been removed from the game.

Stat Priority (but see the above note.)

Agility is easily your #1 damage stat.

Haste speeds up everything you do, in addition to your energy regen. It’s your “Attuned” stat and your Outlaw Potency ability, which provides the bonus and also provides more energy regen from your off-hand strikes.

Crit gives all of your strikes a chance for 150% (200% in PvE) extra damage. A high Crit rating can add a fair amount of added pressure. The main reason that Mastery is better is because 1) you have nothing that procs off of Crit and 2) a given number of Mastery points will give you a lot more Mastery than the same number of points will give you in Crit rating. Plus, your Roll the Bones finisher might give you a 40% crit buff anyway, so there’s no real need to stack it.

Mastery provides you additional off-hand attacks. It applies to your main hand auto attacks as well as all of your other strikes.

Versatility adds to damage (and healing) and your damage reduction.

Gems for the Outlaw Rogue

Warlords did away with gem sockets on vendored PvP gear, though you could occasionally find one on gear awarded from the boxes won from events. Legion has no gem sockets. So the section below is for those at level 100 and lower. If you can’t afford the gems then see our gold guide for tips on making a bit more gold.

This set of recommended gems is for Haste and matches socket bonuses. Matching is recommended, because while Ag is better than the other stats it isn’t wildly better. Perfect gems have exactly the same stats as the gems shown below, but the prices might be very different. Get whichever is cheaper.

Note that the Warlords stat squish is in and the gem value are much smaller than before, though since everything else is also squished their relative value will be similar. Gems that used to provide Hit are now Crit, gems that had Expertise are now Haste.

This section assumes that PvP gemming will become available at some point. If you’re using PvE gear, that has sockets, the continue. Otherwise skip this section and head down to enchants.

Enchants for the PvP Outlaw Rogue

Legion did for enchants what it did for gems. Killed them off. Also, see the note in the Stats section about gear, stats, etc.

In Warlords Head enchants are gone, the Shoulder enchants come from the Inscription profession. There are enchants for your rings and neck pieces.

As before, the highest level enchants can be added to the lowest level items, such as your level 1 heirlooms.

This section covers the gear quickly, there is a lot more detail in our Rogue PvP gear guide. Again, see that note in the Stats section.

Do you want the Honor gear? Up to you, but it will be a boost if you’re going into RBGs or Arena. It’s definitely better for PvP than the timeless or crafted gear. Order of acquisition, gemming, and enchanting is the same as for the Conquest gear, below.

This is a good order in which to pick up your gear, as it will give you most of the major stats first. Gem and enchant as shown above.

Remember that gear is far less important than even before. Not unimportant, just much less so.

Crafted Gear: There is no crafted PvP gear, but you can wear three pieces of pretty decent PvE gear that you make with your Leatherworking skill (or buy off the Auction House.) Actually, you should drop one of those and grab the crafted main-hand weapons. Call it chest, legs, and weapon. Stats on crafted weapons/armor can be rerolled to get what you like. The pieces can also be upgraded at a material cost greater than the original making. Weapons are 630 and armor bits are 640. Armor goes to 715 and the weapon to 705.

You PvP gear will be much better in a PvP setting, but the crafted bit will get you started. Of course, it helps is the rest of your gear is halfway decent, too.

Honor/Conquest Gear: Your PvP items, outside of Legion, have two stats, one for PvE, the other for PvP.  In Warlords Honor gear was 700 PvE and 730 PvP, Conquest gear is 710/740.IN any form of PvP combat the 2nd number is used. In Legion everything is “normalized.” Item level counts, just a lot less than before.

Legion note: you’ve lost some abilities and gained others. All in all you’re still in good shape, though a bit more dependent on the Gods of Fate than before. Here’s how you shape up in the Legion pre-patch. Ignore the rather large numbers on some of the strikes. 😉

Tricks of the Trade no longer adds damage to your partner, so is now useless for PvP.

Poisonsare not your thing anymore.

If you can time your Killing Spree with a buff or an item proc then you’ll do that much more damage.

Try to restealth as often as possible. There are some tips on doing that here.

Some macros for your amusement.

Use this for your TofT  button. Fill in the name of the party member who will be the focus of your T of T. Fire it off, he gets the benefit, and you don’t have to fuss with target picking or focus changing. This macro will not deselect your current target:

Note that since Tricks no longer adds to your team member’s damage, in Warlords/Legion it’s a useless ability for PvP.

Another option, if you change T of T targets, is to do it with a mouseover. If there is no mousever target then it will do your current target.

Mouseover a target and hit the Blind button. If there’s no target under your mouse then it will blind your current target.

Cast gouge and immediately start bandaging. Works just fine when out of combat. Replace the name of the bandage with the one you’re currently using.

This one will dismount and stealth you, then cast Sap. Keep mashing it if you suspect there’s a Rogue/Druid nearby. It will only target sappable enemies and won’t target dead ones.

This makes sure that your autoattack starts, even if you don’t have the energy to actually use SS. You can also add /startattack to any macro that you might use when switching targets. 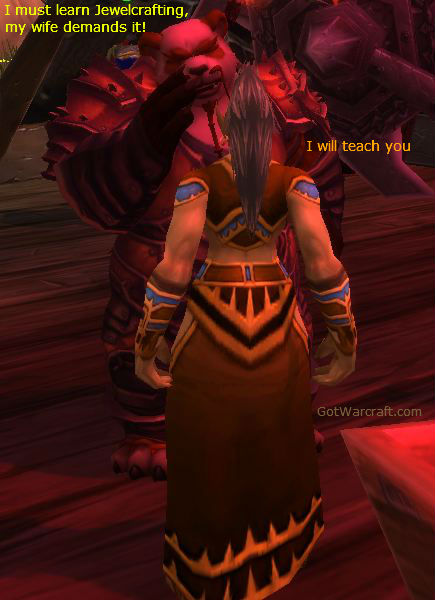 In Warlords of Draenor all of the profession bonuses are gone. Professions are now only for gear, toys/mounts, or gold making.

Best for cash, but still being useful? Pick two from Herbalism, Skinning, and Mining.

Professions for the Outlaw Rogue

The best? Orcs and Humans.

In Warlords all racials dealing with Hit and Expertise are gone. except for the Orc expertise all others were replaced with new abilities. All races now bring some kind of damage ability to the table.

Not yet at the level cap? Leveling another Alt? Want to save yourself a whole lot of in-game time and a good deal of frustration? Even if you already know many or most of the quests?

Dugi’s guide is like having an expert helping you every step of the way. Regardless of your starting level you just pick your starting point and the guide automatically updates and advances as you complete quests, sets a waypoint arrow automatically pointing you in the correct direction, and includes all the important quest info.

Even though WoW’s in-game quest guide is superior to what it was previously it still doesn’t give you the right path for the fastest leveling or keep your from tackling things that are way to high or too low. With Dugi’s you’ll never have that problem or wonder about where to go or what to do.

Even if you take a break to do some PvP leveling or some other quests that aren’t in the guide it’s not a problem. The guide will pick up from where you left off, adjust for your new levels, clean up your old quests, and you’ll go from there.

Dugi’s is always fully updated for all the latest patches and expansion, including Warlords of Draenor, and has some extra goodies, such as the ability to work for the LoreMaster achievements. Get your copy now and blast to the level cap

2 thoughts on “Outlaw Rogue PvP in the Legion”