Survival Hunter DPS Guide, for the Best in DPS

Updated for Mists of Pandaria Patch 5.4.8, with some Warlords of Draenor notes.

The Survival spec is in a good place in raids and PvE in patch 5.4.8., doing slightly more damage than either  Beast Mastery or Marksmanship, depending on who you ask and what sims they’re running.  In addition to more effective traps (which means better control,) Survival is also effective when more magic damage is required, as opposed to physical.

This Survival Hunter guide is primarily intended for Raiding (DPS) use at max level. However, the principals will still apply during the leveling process. If you’re looking for advice on leveling your Hunter, check out our Hunter Leveling Guide.

For PvP or leveling see the links just below. 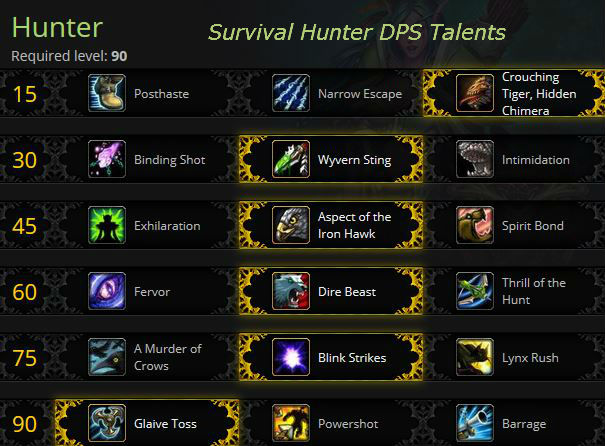 Faster movement or more uses of Deterrence and Disengage. The latter is more generally useful, but your call. None have any direct effect on DPS.

All crowd control (CC,) none have any direct DPS value. None will have an effect on bosses. They all have their niche uses.

Dire is best for single target, Fervor and Thrill coming out ahead on A of E fights.

All of these are very close in DPS value.

These are the new talents that are coming in Warlords. Naturally they’re subject to change before release.

Any pet can be either Tenacity, Ferocity, or cunning and you can switch their specs at any time. Ferocity is generally the best choice as it provides the greatest DPS gain, but there may be situations where Tenacity or Cunning might have use.

For raid buffs and useful effects see this Pet Utility Table. The buffs will determine which pet is the best one to use in any given situation.

As Survival you don’t, of course, have access to the exotic pets (and their abilities,) but various other pets do bring useful abilities to the raid, beyond their damage.

Looking for pets that are new and different? Petopia is probably the ultimate guide to pets. WoWhead, naturally, has a bunch of info, too.

Cooldowns for pet abilities are longer than than they are in Beast Mastery and patch 5.3 doubled some pet cooldowns.

Buffs do not stack with any similar buffs your team might provide, such as Cat Mastery & Shaman Mastery. Make sure you pick your pet to get the best (most complimentary) buffage possible.

Here are some useful pet families.

Your pet inherits half of your Hit and Expertise ratings. But, your pet only needs Hit and gets Hit from your Expertise, so if you’re capped at 7.5% in each your pet will be Hit capped and you’re good.

Crit is the “go to” stat of the rest of the stats. The more the better.

Haste is a very strong stat when you hit certain breakpoints, such as getting in an extra shot or DoT tick. It’s less useful than Crit otherwise. If you want the really detailed breakdown on Haste then see this EJ page (it’s for Marksmanship, but most it also applies to Survival.)

Mastery adds to your magic damage, not to any physical damage you might do and nothing for your pet, so it’s not as strong as the others.

In Warlords there will be two new stats:

There are a bunch of changes coming in Warlords, but they won’t change your rotation much. Not unless the relative values of various abilities change. We’ll have to wait and see on that one.

Here are some of the WoD changes:

Your Rotation in the Mists

Keep these up at all times:

When facing smaller groups use…

If you’re dealing with 4 or more targets use…

Your DPS cooldowns Dire Beast, A Murder of Crows, Rapid Fire, Rabid and Stampede should be used on cooldown. There seems to be very little difference in priority between them, so use them as they pop up.

Gems for the Survival Hunter

In Mists of Pandaria

Agility is definitely your best stat, but gems with secondary stats have twice the value of agility gems, 320 Haste Vs 160 Agility, for example. This means that socket matching will be worthwhile in some cases, particularly if the slot has a big agility bonus, say 60+ agility per slot.

Use this tool if you want to really maximize your gem usage. It will factor in race, all your gear, various other stuff, and help min-max for your particular situation. Really quick and dirty answer? Just gem for Agility in all slots.

Less quick and dirty answer? Use the hybrid Agility gems to match socket bonuses (if the bonus is lots of Agility.)

Note that if the socket bonus is something other than Ag or Crit you’re probably better off just dropping a Delicate Primordial Ruby into those yellow and blue sockets.

Various other gems are included below in case you want to experiment.

Short on gold? Most of the enchants below have similar enchants available, of lesser value, for less cash. We’ve linked to a couple of these. Check with the rep vendor or the Auction House for others. If you want to buy the best enchants, fund all of your alts, donate to the guild, etc., but don’t have the cash, then see what the Zygor Gold Addon can do about about improving your situation.

Helm enchants are gone in Mists of Pandaria, shoulder enchants all come from the Inscription profession.

Most of the professions add an average of about 320 Agility. Since gems with secondary stats are twice the value of those with primary stats (320 Haste Vs 160 Agility, for example) Blacksmithing might be the most valuable profession if you’re just looking for the buffs or gemming versatility since you can add the 640 in stats vs 320 Agility.

Jewelcrafting provides only 320 in any stat over non JC gems.

Engineering has a big Agility cooldown and Herbalism has a very nice Haste cooldown.

Which profs are “the best?” Engineering for the cooldown and the various useful toys. Blacksmithing for the extra gem sockets, but since you’ll just drop Ag gems into those it’s no better than the other profs. 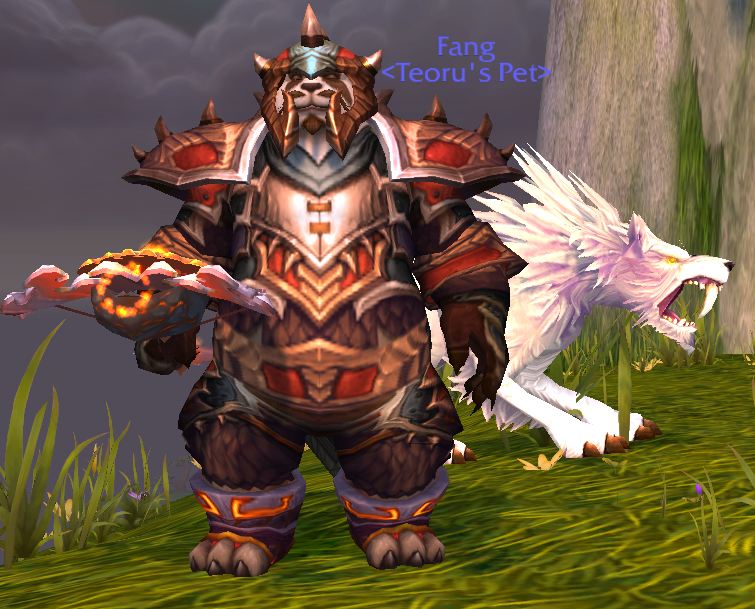 Since Catalclysm everyone but Gnomes were allowed into the Hunter crowd. Probably because they’re too busy repairing their city or they’re too short to use a bow (how about a Gnomish X4500GT Zarkomatic blaster rifle?)

In Mists of Pandaria even Pandarens can become Hunters, but not Gnomes.

If you’re looking towards the end game the Orcs and Trolls are arguably the best Hunter races, with  Worgen and Draenei on the Alliance side. They aren’t wildly better, but if you want every little bit of uberness…

Trolls are possibly the best of all the races for Hunters.

Orcs, on the other hand gain, are also a contender for “best Hunter race.”

A slightly crazed Hunter DPSing in dungeons. Lots of chat and some good tips.

A”How to” for Survival rotation with some discussion. Less crazed than the previous video. 😉

In this one the author covers talents, glyphs, gems & enchants, and rotations. 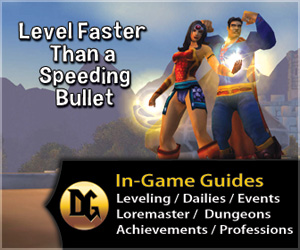 Once upon a time, while leveling, you had to look up quest details on some website. Now you have a guide like Dugi’s which sits in-game, in a small window, and shows you step-by-step where to go, what to do, and a number of details to make it even easier.

Why a guide when you can just buy a high level character for $60 from Bliz? Save money, for one. For another there’s the extra gold, rep, learning your character, etc. And you still have to hit those last ten levels.

Dugi’s in-game guide is always quickly updated for all patches and expansions, even Shadowlands, so it’s never obsolete. Grab yours here and get leveled fast.

3 thoughts on “Survival Hunter DPS Guide, for the Best in DPS”