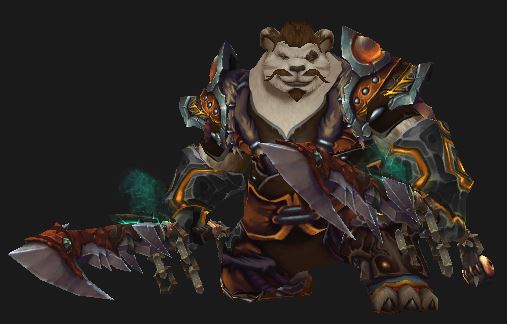 Yes, Brewmaster PvP can be done. You’re able to soak a lot of damage and can dish out a decent amount. You will achieve pleasure by watching the frustration on your enemy’s faces as they try to being you down, before you kill them.

No, you won’t likely top the arena rankings, or get close, but Brew PvP  can be fun in less demanding situations.

Certain talents are better for some situations, while other talents might be better at other times. Keep a stack of Tome of the Clear Mind for switching talents (and glyphs.)

Descriptions are below the image (comment if you want to discuss) and our picks are checked: 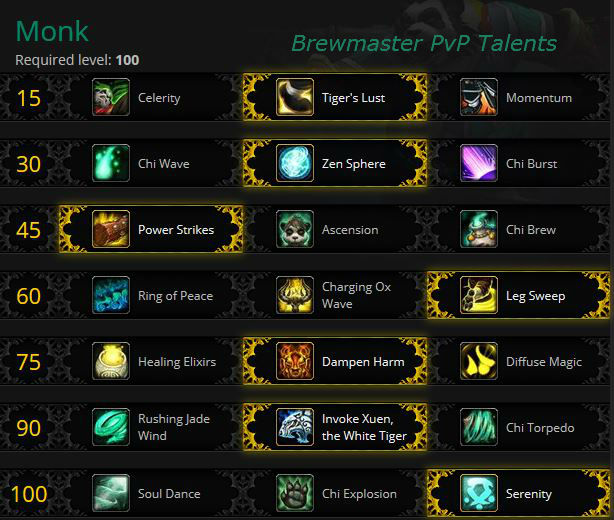 Tier 1 offers us three mobility enhancing talents. Tiger’s Lust is the generic pick for PvP with its root/snare break. Glyph of Freedom roll lets your rolls break snares, but not roots or stuns, and will make Celerity and Momentum a bit more useful. .

Forget any of these for group healing, as they’re pretty useless for that. Which one heals you the most and increases your damage?

Which of these is “best” really depends on what you are doing. Do you need more Chi generally? A higher Chi max with faster energy regen? Or burst Chi?

Each of these does useful, but different things. Again, what’s your game require?

Which one is best depends greatly on the type of damage that you’re taking, though Dampen Harm is a decent default pick.

The best choice in my opinion is either Dampen Harm or Diffuse Magic depending on whether a fight is loaded with magical damage or not.

The minors are mostly just cosmetic, such as a color change, but a couple add a bit of convenience.

In order of Interest:

Bonus Armor does not come on PvP gear, but if you’re using a PvE piece then note that it increases your attack power (via your Bladed Armor ability) as well as physical defense.

Mastery adds to your defense (more Stagger) and your offense (more attack power.)

Haste increases your energy regen, speeds up cooldowns, etc. It doesn’t scale well with better gear, but is still a big help.

Critical Hits do 150% damage (200% in PvE) and proc your Elusive Brew stacks. Dual wielding will get more auto-attack crits and so more brew.

Multistrike hits can crit and can proc anything than normal hits can proc, which isn’t much for Brew, unfortunately. You get one chance (two in PvE)  at a 30% effect extra hit or heal.

Versatility adds to your damage, your heals, and your damage reduction. It’s actually a nice stat if you can stack enough. You’ll have to get enough faction rep to be able to do that, though.

A pair of one handed weapons generates more Elusive Brew due to more auto-attack crits, but the 2-hander hits harder. Your call.

Stats on crafted items can be rerolled. You may have to do this repeatedly to get the stats you want, ideally Mastery & Haste.

PvE Vs PvP gear? PvP, definitely. Here’s why: The PvP pieces have two ratings, one for PvE, the other for PvP. For example, the Season 1 Honor Gear is 620/675. That second number is the item level of the gear in any PvP situation. You will have to do some serious raiding to beat that, if you want to use PvE gear.

Note though, that there are no gem sockets and no tertiary stats (Avoidance, Leech, etc.) on the PvP gear. So your 665 PvE piece with a gem socket is pretty close to that 675 piece without.

The set bonuses are:

These set bonuses don’t look to be too useful in PvP, but it’s your call.

It’s important because not all of the pieces available for any given slot actually have the set bonuses. The 4 piece bonus might be nice if you team and is useless if you solo PvP (eg: duels, or your partner is never that close.)

The Honor gear has two options for every slot, each has different secondary stats. The Conquest gear has three options, but the third requires revered rep with your home faction. In both cases only one option will have a set bonus. For the most part, only the rep piece will have Versatility.

As an example, for the season 1 Conquest chest (season 2 will be similar:)

How to Upgrade, What Order do I get Stuff?

Gemming PvE gear is really easy. There isn’t any. There are no gem sockets on Warlords Season 1 PvP gear.

For the pieces (PvE) that have sockets, all the gems are the same type and all fit into any available socket. There are no socket bonuses, as there were with previous expansions.

Now, if you are using a PvE piece with a gem socket then gem for Mastery.

Warlords enchants are limited to Neck, Back, Rings, and your weapon(s.)

Rotations and “How To”

Build Chi and then spend it, not much more to it than that. Well, there is, but this is the basic routine.

Touch of death when the enemy gets to 10% or less.

Since your damage isn’t that hot you’ll need to make especially good use of your control, escapes, and heals.

Reducing Damage and Other Defenses

Pulling Yourself Back Together (Heals)

Expel harm combined with Elusive Brew. Note that since you’re drinking a Brew you will get the heal from healing Elixers (if you took that talent.) Casting Guard first will improve this heal.

Combine Guard with you Zen Sphere for defense and more healing.

Burst macro. ’13’ is your first trinket slot where you have your “on use” damage trinket.

Related Postings (AKA: Check out these pages next)