The Fury Warrior Guide, for the Shadowlands 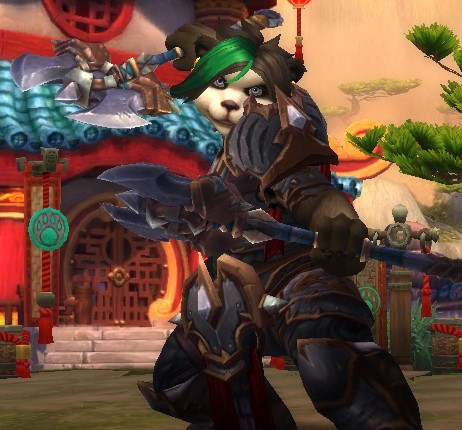 Fury Warriors rank among my top three in terms of favorite class and build, combining the awesome looks of plate armored warriors with the berserk fast-paced damage-dealing capabilities of a true death-dealer.

Dual-wield is a large part of both the Fury Warrior’s image, as well as general style of play, leading a role of primarily raid DPS and PvP, should you choose to endure the pain (as Arms IS better,) or even arena play.

This page covers the Fury Warrior in Shadowlands and what you need to maximize your damage. For PvP take a look at the Fury PvP page.

If you’re leveling up then check out our Leveling Warrior page or take a close look at Zygor.

Best roles: PvE damage and leveling, but can be fun in battleground PvP. 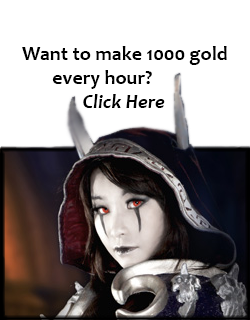 Race doesn’t count for a lot, but if you want every little bit… 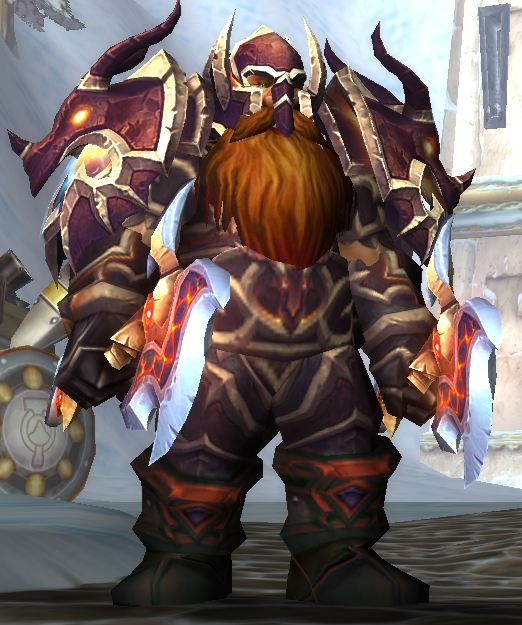 A large part of what makes your Fury Warrior viable, having made the decision to properly gear, learn the correct rotations, and so on, is the talent build you choose.

With the new talent system brought to us with Mists of Pandara there isn’t “be all and end all” of builds. What defines you as Fury is your set of core abilities, with the talents customizing what you do.

A new feature of the talent system is that you can easily change them, one by one. See below for more on that.

Whereas Arms is the two handed weapon expert, emphasizing precision, Fury is the berserking engine of destruction. Upon choosing Fury you automatically receive certain abilities and will learn the rest of your spec abilities as you level. Mastery and Plate Specialization are learned from your trainer.

If you’re leveling your Warrior then take a look at our Warrior Leveing Page. To get to level 90 as fast as possible, see our recommended leveling guide, below.

These are the abilities that Fury, and only Fury, gets as you level.

How the Talents Work

In the last episode (Cataclysm and earlier) each spec got to pick talents from a set of talents unique to that spec. Those days are gone. For Mists any spec can pick any of the talents. You get one per row, for six total at level 90.

Your specific abilities are learned as you level and these are what define your specialty (spec.) You also learn the regular Warrior abilities in this way.

This will also do just fine as a leveling build. 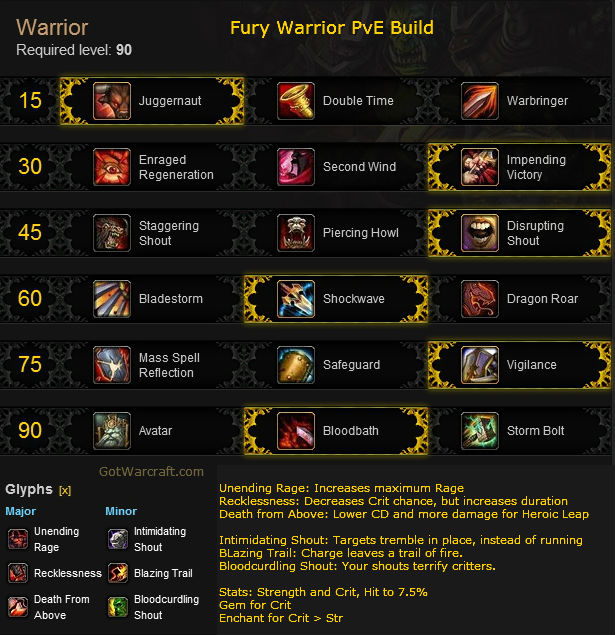 Juggernaut: For the mobility, Charge every 12 seconds.

Impending Victory: A cheap attack with a minor heal

Disrupting Shout: Area interrupt, just the thing when fighting groups with casters. Interrupt & silence all of them.

Shockwave: Area stun in a cone in front of you. More stunage is always a good thing. Bladestorm would be a good choice for heavy A of E fights.

Vigilance: protect an ally by sucking up some of the damage.

With the new talents system PvP as Fury might be a bit more interesting than it was in Cataclysm, so let’s give this build a look: 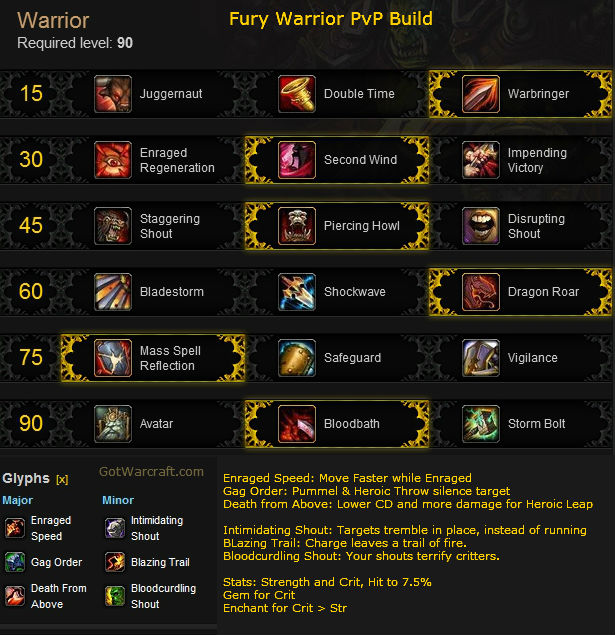 Warbringer: Stun and knock down the opponent at the end of your charge.

Piercing Howl: Snares all the enemies in the area. Keeps them from hopping around.

Dragon Roar: Knock all nearby enemies down and back for a brief time.

This section is dedicated to covering the numerous different stats you may wish to stack, hit rating, STR, crit, weapon expertise, etc.

The stat values are for Mists of Pandaria, but might change due to bug fixes, updates, and tweaking. This will be a good start and should have you pumping out as much damage as you can.

A note about Hit: There is a common misconception surrounding +hit.  The more you hit does not magically = more criticals. Instead, +hit simply decreases your chance to miss which increases your white damage and eliminates misses from your specials. +Hit means you will hit more often and a few of those hits will be crits. See our caps page for more about Hit and other caps. Reforge the lowest items on this table into better ones. Be mindful of caps.

White damage is quite a bit of help, especially in long battles, as well as for building rage. Therefore, +hit is still a very valuable tool of guaranteed DPS increase, especially given the high miss chance of dual-wielding.

It used to be that stats, such as crit rating, would be more valuable than Strength, but with the way things scale in Cataclysm (and even more so in Mists of Pandaria) this is no longer the case. Each point of Strength adds 2 Attack Power and with Cataclysm & Mists the value of Str scales (after level 80) much faster than Crit.

Slow weapons hit harder and with few, if any, abilities requiring a fast weapon slow becomes the way to go. Your specials base their damage off the weapon’s damage range, not the DPS, so they will hit harder than they will with the faster weapons.

Most of the Warrior specials are also Instant, so a faster weapon speed will not result in more specials.

Basically you should get your enchants besed on the priorities above.

Note: If you have Landslide or Dancing Steel on both weapons then their procs will stack, but procs from the same weapon do not stack.

Short on gold? Most of the enchants below have similar enchants available, of lesser value, for less cash. We’ve linked to a couple of these. Check with the rep vendor or the Auction House for others. If you want to buy the best enchants, fund all of your alts, donate to the guild, etc., but don’t have the cash, then see what the Zygor Addon can do about about fixing your poverty.

Skip socket bonuses, unless they are at least +20 Str., and use a Bold gem instead. You shouldn’t need any other color to activate a meta gem. While the Mists of Pandaria gems are much nicer than the Cata gems, they require an item level of at least 417 which is higher than that of any Cata gear.

PvP Power replaces Spell Penetration in Mists. It’s like Attack Power, but for PvP only and is probably second only to Strength in value.

Epic flying mounts require over 5000 gold, for mount and training. Your ground epic mount costs a smaller, yet still high amount.  To reach these requires often dedicated gold making, and for that pursuit I’d recommend picking up a combination of harvesting skills such as Herbalism, Skinning, or Mining. (Also see our gold guide for more tips.)

The crafting professions are all very expensive to level up and you should probably wait until 80+ to seriously level any of them since that’s when the cash comes a little more freely. Of course, that’s not such an issue if you farm all your mats (ugh.)

Engineering and Blacksmithing are pretty useful skills for you.  Engineering provides both enjoyment and PvP effectiveness in the form of numerous trinkets and utilities. Blacksmithing allows you to craft powerful endgame armor or weapons with materials gathered personally and on the auction house or through raids. Unfortunately, leveling these skills while leveling yourself is a guaranteed path to poverty.

All of the professions offer self-only items or abilites, which run about 80 points of Str or so. (The bonuses in Mists of Pandaria (MoP) will be much greater.)

One of the commonly seen questions in the forums and in the game chat is something like, “Where do I go to level…?” You can grind endless groups of mobs, which a Fury Warrior does very well, or you can follow the quests as you find them, perhaps looking for quest details on some website.

Or you can consider a Warrior leveling guide, which shows you where to go and what do to all the way to the level cap:

And it works if you’re brand new to WoW or an old hand who’s decked head to toe in enchanted Heirlooms. Might as well make the road to the level cap easy, right?

Click Here to get your own Dugi’s Leveling Guide