Warlords of Draenor has some changes that you’ll want to check out. Various abilities were removed, some were restricted, and a bunch were tweeked. Healers got almost as much attention as tanks and you’re not an exception. See the changes here.

Pretty much all of the Paladin talents have some value, especially in particular situations. It also depends on what works for you. The talents picked below are for general PvE, but you may want to experiment and find out what works best for you style of game.

Depending on the exact fight and the situation you might want to change talents (and glyphs) to suit. Fortunately, this is easy. Open your talent pane, click the new talent, spend one Tome of the Clear Mind, click “learn” and you’re done. Keep a stack of tomes handy at all times if you’re doing any switching. 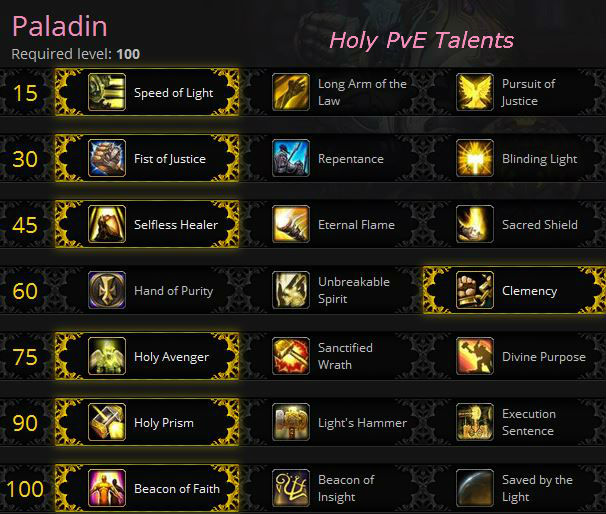 Movement modifiers. What kind of movement do you need? How much and how often?

Crowd Control (CC:) Do you need a stun or do you need to put enemies to sleep? Pick whichever suits the encounter best as none of them impact your healing. None of these will have an effect on the bosses.

Modifiers to your heals.

The big heals. Which one is “best” really depends on the encounter and how your group is stacked.

Glyphs are easily changed, many are useful (at least situationally) and none are “required.” Pick the set that best suits what you’re doing and your current gear level.

One Tome of the Clear Mind per change. Change ’em out as you need to:

In Warlords: Hit and Expertise are dead. You have an “Attuned” stat, Crit (from your level 90 Sanctified Light) which adds 5% Crit from all sources. With your base of 5% and this attuned 5% you have a 10% base crit chance.

You also have two new stats, Versatility and Multistrike. Their exact value remains to be seen, but here is how it looks for now:

Intellect is your best stat for healing power, it improves everything that you will be doing.

Crit randomly gives you those nice big heals. It’s your “attuned  stat” and every crit you get is one less additional heal that you need to cast.

Haste: Speeds up those cast times and Heal Over Time ticks and lowers the Global Cooldown time. You will heal more and faster and burn mana just that much faster. It will let you react faster and get emergency heals off sooner.

Mastery puts a small absorb shield on your target, which is damage that you don’t have to heal. For this reason some people say that it’s actually more important than Haste.

Multistrike gives a chance for one or two additional heals, based of whatever you just cast, at 30% effect. That will add a few percentage point to your total heals.

Versatility is a straight up add to healing (and damage) done as well as a reduction in damage that you take.

Spirit is very important, especially as you go from normal 5 mans to hard-mode 25s. Keep stacking Spirit, at the expense of everything else, until you’re happy with your mana use, or can at least “get by.” If you’re finishing the fight at full mana then you can drop some Spirit. If you’re running out then get more. In short: get enough so that you don’t have to worry about mana.

Reforging:  Stack Spirit and Reforge to Spirit until you’re happy with your mana usage, then go for Haste or Mastery.

Seal of Insight should always be active, as it provides a bonus to our healing.

Healing is more of a reactive play style than most and rather than utilize a rotation it’s simply important to understand which spells are best to use in certain situations depending on the damage being sustained by the raid.

Beacon of Light should always be active on a target, usually a tank as this way you can provide constant healing to the tank while simultaneously healing the rest of the raid. The amount transferred to the target of your  Beacon of Light varies depending on the healing spell used.

Holy Shock allows us to build charges of Holy Power for use with Word of Glory and, on a critical strike/heal, grants us the Infusion of Light proc.  Holy Shock should be used as often as possible to maximize Holy Power generation.

Holy Radiance is a good AoE raid healing ability and procs Daybreak which will make your next Holy Shock heal a group of targets for yet more AoE healing.

Divine Light is a heavy single target heal that should be used when healing through heavy sustained damage.

Flash of Light is an emergency heal with a very high mana cost for when a target is taking heavy damage and you lack the time necessary to cast Divine Light.

Depending on which talent you chose…

See the Warlords notes just below.

As you probably know gems can be really expensive and I know not everyone has tons of extra gold lying around. So if you are like me and don’t have the extra gold to buy all the awesome gems I really recommend this gold guide. It’s working really well for me so far.

Gemming for gear under item level 600.

Your Plate bonus adds to any Int gem bonuses, making them worth 5% more Int, that bonus does not add to other stats.

The enchants are pretty straightoforward, Int wherever possible, but there are a couple of Spirit ‘chants if you need more. As with gems, your Plate bonus adds to any Int bonuses from enchants.

The only new enchants in Warlords are for your weapons (not shields,) cloak, neck items, and rings. The older enchants cannot be applied to items over ilevel 600. (This may change as the expansion develops.)

Note that the “breath of…” enchants are vastly cheaper than the “gift of” enchants. At least as of this writing.

Enchant for Crit until it’s “high enough,” then Haste. Note that there is a weapon enchant for Spirit.

Race Choice for the Holy Paladin

All racials with Hit or Expertise are gone. All races have something to offer for healing throughput.

Professions for the Holy Paladin

All profession bonuses, such as the extra gem sockets from Blacksmithing, are now gone. Use the professions for Gold or gear.

How to Heal as Holy, what to use, and why, for raiding. While this was originally a 5.1 video everything in it is applicable to 5.3.

Holy Paladin Gameplay – also discusses his mistakes and how to manage your mana.

Need to hit the level cap quickly? Want to get another alt leveled? Need to get all your characters to the max level so they’re ready for the next expansion? Then what you need is to have an expert looking over your shoulder, telling you the most efficient path to take, where to go, and what to do.

Zygor’s Guide is that expert. Zygor’s in an in-game widget that keeps track of everything and shows you the best order in which to do all of those quests. With the ginormous number of mobs and quests in WoW having a leveling guide to show you the way will save lots of time as you blast to the level cap. Heck, you might find yourself never looking at your quest log again.

Whether you’re new to WoW or are decked head to toe in heirlooms, Zygor will keep you pointed in the right direction. Even if you gain a bunch of levels in the dungeons or PvP Zygor will figure out where you are now and where you need to go next. You’ll even be able to safely dump all the old quests. Pretty Sweet.

Fully updated for all the latest patches and expansions, Zygor’s will get you where you want to go as quickly as possible. Grab your copy here or read our Zygor review first.