Harness the Elements and Win 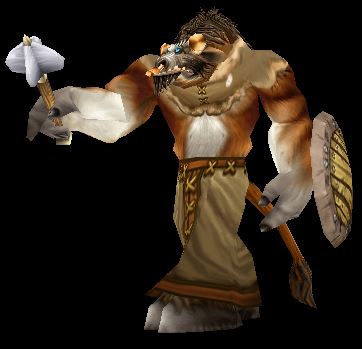 Why become a Shaman? Because there’s a certain satisfaction in commanding the forces of nature to obliterate your opposition.

A Shaman can use the elements to help hack their opponents to bits (Enhancement,) destroy them at range with lightning and other elemental forces (Elemental,) or keep the group healthy and happy (Restoration.)

As a shaman you preserve a balance, you aren’t so easy to level as to make it a one-and-done process, yet you don’t lag so far as to make it to the level cap only to discover it’s been increased by another 10 levels, once again. You can definitely level quickly enough to be satisfying.

Elemental and Ehancement are the specs we’ll focus on with this page. Restoration is nice in Dungeons and PvP groups, but is going to be a bit slow when soloing. We’re also not going to cover any of the “flavor of the minute” buffs or nerfs. Next week a hotfix will change whatever is hot today, so we’ll just concentrate on what you need to know, since you do want to play a Shaman.

Builds: Which is best for Shaman leveling? That depends…

Race makes little difference, so play what you like. If you have to be efficient…

Skip all crafting professions while leveling unless you have a nice pile of gold. If you do get a craft, then Leatherworking will make the mail armor that you want. With Inscription you can make all of your glyphs. You CAN make a ton of gold with professions, but they’re still expensive to level and will slow your leveling.

Note that all profession bonuses are dead in Warlords, though you can make some very nice gear.

Which of the Shaman Races is For You?

All the Shaman Approved races bring something to some aspect of the end-game (raiding, pvp, etc.)

There are various Allied Races for either faction. Generally to earn these you earn Exalted Reputation with the appropriate race and then run a quest chain starting in the Stormwind or Orgrimmar embassies.

Shaman For the Horde!

Goblins as Shamans? Who’d they bribe to get that deal? Do they buy their totems from GobMart?

Shaman For the Alliance!

The Dwarves have been corrupted/enhanced by new tribes, some with a Shamanistic tradition. Naturally their totems should be kegs, unfortunately they aren’t.

Yep, they too can become Shamans. They can pick Horde or Alliance at character creation.

Abilities for the Leveling Shaman

You pick your specialization (spec) at level 10 and then you are locked into that spec until you change specs.

All specs share a common pool of abilities, just as they always have, but then each of the class specs has unique abilities that you gain beginning at level 10. They define the differences between Elemental, Enhancement, and Restoration.

All of the abilities are learned as you level. Once upon a time you had to visit a Shaman Trainer to get the new abilities. No longer.

Abilities Common to Every Shaman

Every Shaman has these abilities:

These are the abilities unique to each specialization (spec.) They define you.

In the dungeons both Elly and Enh are Damage (aka: DPS) and you job is to lay down the hurt on whatever the tank is fighting. Let the tank get their attention, then you burn them down. Durable as you are you are not the tank and you should not initiate attacks, let the tank handle that.

In PvP stay with your group and assist them. Lone heroes get crushed. Find a healer and stick near him. Your heals are decent, but it’s better if you don’t have to worry about healing yourself and can make them worry about it, instead.

In Legion and later you can easily switch specs (Ele to Resto to Ehn, and back again) anytime that you’re out of combat. Want to chop up these mobs as enhancement, those mobs as Elemental, and the switch to Resto and heal a dungeon run? No sweat, just switch. You don’t need reagents, a trainer, or to commune with the elements. Just pick the new spec on your talent page and go.

The actual Talents can be changed at almost any time. You do need to be in a rested XP area, such as the Big City, your Garrison, or an inn. No reagents or anything are needed. Just pick the new one(s) and go. If you are out in the field then have a stack of Tome of the Clear Mind to make changes anywhere (and be out of combat.)

Keep in mind that there are a number of picks and some are better in some situations, such as whether you PvP more or less than the other guy. Adjust accordingly and to your style of play. This set assumes that you are mainly questing to the level cap and are NOT decked out in hot and corrupted Azerite gear.

If you want to level as Resto then you’ll probably be in a dungeon group and you should go to our Resto Shaman page.

Enhancement first, then Elemental is below. 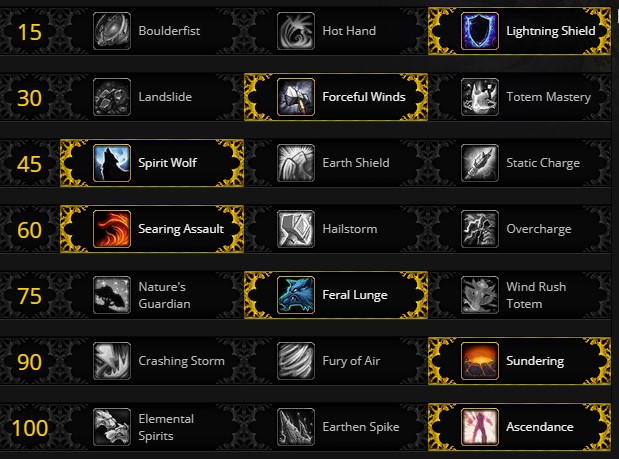 Enhancement talents are above. 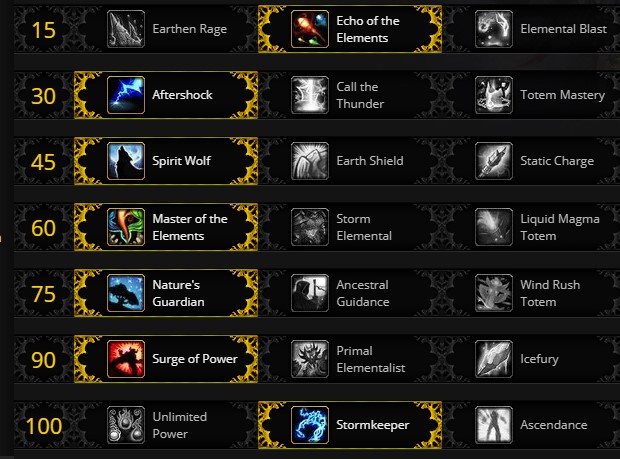 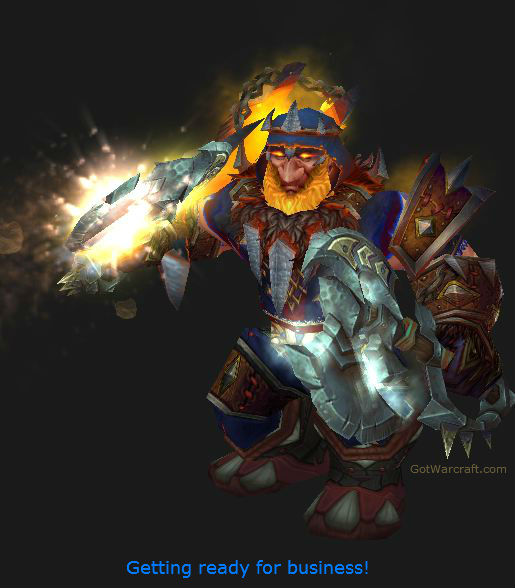 Note that if you switch specs from Enhancement to Resto or Ellie that you will have to make sure your gear is now Intelligence gear, and visa versa.

While leveling you do not have to worry too much about “the other stats.” but here is a priority list if you want to be more efficient:

Enchants to Improve Your Gear

Chasing down the best gems or enchants is of little use while leveling. You’ll burn through a lot of gold, and you’ll probably be leveling fast enough that you will outgrow any enchanted/gemed gear that you’re using very quickly. Assuming you have the gold and you want to pick up some gems anyway:

Enchants for BFA are weapons and rings only. Prior to that you can enchant other pieces, they will just cease to work after whichever level. Stats shown are max, they will scale down at lower levels.

The rest? Only if you will keep an item long enough to be worth the cost of the enchant. Your call.

Glyphs for the Leveling Shaman

As of Legion the useful glyphs were shuffled off to the elemental planes, maybe never to be seen again. You are left with a few minor glyphs, all of which have purely cosmetic effects on one or another of your abilities. For example, Glyph of Spirit Raptors changes the appearance of your Spirit Wolves.

Up to level 40 you will be wearing leather armor. At 40 you get to wear mail armor, though you might have (or find) some leather pieces with better numbers. This is fine for now, but at 50 you will want to be in all mail armor. At that point you will get a 5% bonus to your best stat (Int or Ag) by wearing mail in all of your armor slots.

Buying gear off the Auction House might be ok if you are trying to compete in something at a set level, such as level 29 PvP. Otherwise you will level out of it too fast and the heirlooms will be cheaper.

If you have a choice for two pieces of gear, such as when completing certain quests? Grab the one with the better stats. More Int/Ag = better than a piece without.

If you have the gold then this is the way to go.

If you want to get the gold to get the better stuff then check out Zygor’s Gold Guide. Part of that guide, in addition to the leveling guide, is a gear checker. When you find a nice piece of gear it will tell you and allow you to upgrade on the spot.

“How To” for the Leveling Shaman

These videos are aimed at 90+ players, but there is plenty there for lower levels. Take what you need.

Blizzard has a series of crash courses for people boosting to 90 with classes that they might not know well. Here’s the video for the Elemental Shaman. Apply what you can for your own level.

This is aimed at the end-game Ellie Shaman, but there’s a lot of stuff here that lower levels can use. The narrator is very energetic, which is appropriate for Elemental. He also covers talents and glyphs.

The tactics covered are usable at most any level.

Language alert, if you care about such things.

Same guy as above, and he covers a lot of good stuff. As above, take what you need appropriate to your level. As above, the tactics covered are usable at most any level.

Language alert, if you care about such things.

If your other characters are rich then go ahead and level a crafting profession. If you’re poor then you might want to stick with the gathering professions for awhile. You can earn gold, lots of gold, with the crafting professions, but it takes some work and you need to keep an eye on the Auction House. Zygor Gold will be a big help with that.

All three gathering skills are good money makers. You get to pick two. I suggest Mining and Herbalism, because they both give very nice XP.

Note that with BFA professions are broken into “sub-skills.” Instead of having one skills to cover all zones and gear, you have several. For example, you can start Leatherworking in BFA at 110+ without ever having to had done it in any other zone.

Ok, so you have enough gold:

The “should I take a profession” question is interesting. Do you want it for the gear? To make gold? Just to play with?

Need to get to the level cap, fast? Then click here, now

Note on leveling: Regardless of whether you’re questing, dungeoning, or PvPing you will be far more effective if you use macros and keybindings. Macros are just sets of commands that can all be activated at the same time with one keypress. See our Macro page if you need help with macros.

Keybinds are just where you assign an action to a key. You can google or Youtube wow Shaman keybindings and find some good stuff. You can also grab this nifty addon which will do them all for you.

It used to be that going level 1 to 60 in 6 days in-game time was pretty fast. These days? Zygor’s + heirlooms + questing + Recruit a Friend + charging as hard as you’re able can get you to the cap in about the same time.  Our RaF pair has gone 1-80 in 17 in-game hours, doing just that.

Nowadays we have three (or four) ways of gathering our XP. All are fast.

OK, you’re in a dungeon and you’re healing/blasting/hacking stuff. Here are some pointers. 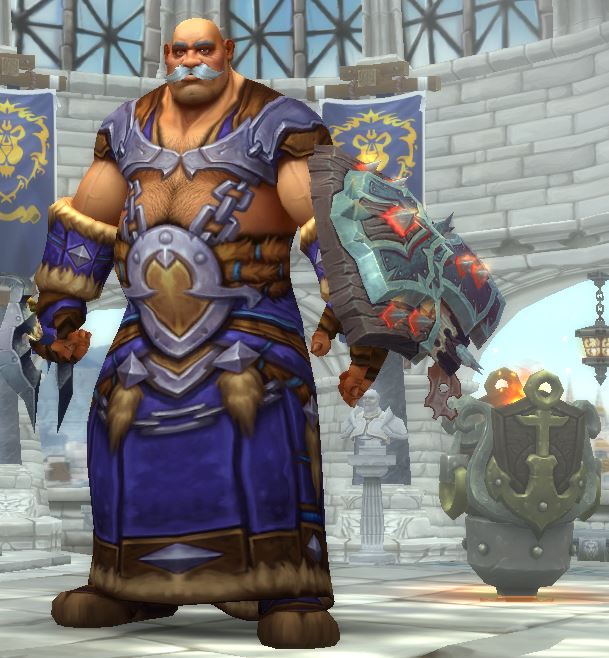 The best way to get to level to the level cap fast is to do it with a pre-written, automated, in-game leveling guide. WoW has thousands of quests and a few million mobs to grind and it’s easy to get lost (in terms of what to do or where to go next ) or just bored. A full-blown guide will make your blast to the top much smoother.

Zygor’s Guide is what you want: constantly showing you where to go and what to do, without ever having to leave the game to look something up:

Assuming you stay focused on leveling (as opposed to shopping, PvP sessions, and RPing) you will be able to hit the level cap much faster than without the guide, even if you are brand new or have full heirlooms and Recruit a Friend.

Zygor is always fully updated for all new expansions, even Shadowlands, and so will never be obsolete. You can snag your copy of Zygor’s Guide here and cruise through the levels.