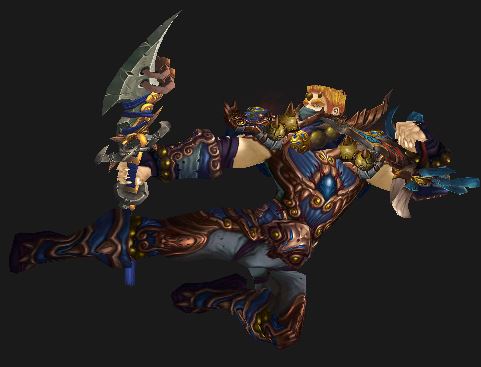 For gearing, this guide assumes you’re level 90. The other aspects can be used at lower levels. Feel free to share (like, +1, etc.) and add your comments, especially if I missed something or need to add something.

Windwalker Monk PvP can be a very satisfying experience. Played properly you’re very hard to take down and you do lots of damage and have lots of control and mobility. Some even say that you’re the toughest of the melee classes. That’s a pretty nice place to be.

The talents picked depend a lot on the game you like to play. 2s? 3s? 5s? BGs/RBGs? World PvP? The talents you pick for your WindWalker Monk PvP will be determined by that game and who you have in your team. For example, Diffuse magic is great against casters, not so hot (ok, just about useless) Vs physical damage.

This is a good start, below, but keep a stack of Tome of the Clear Mind handy if you want to switch talents for the next game. Our picks are checked:

. Talents not described below the image are not interesting. 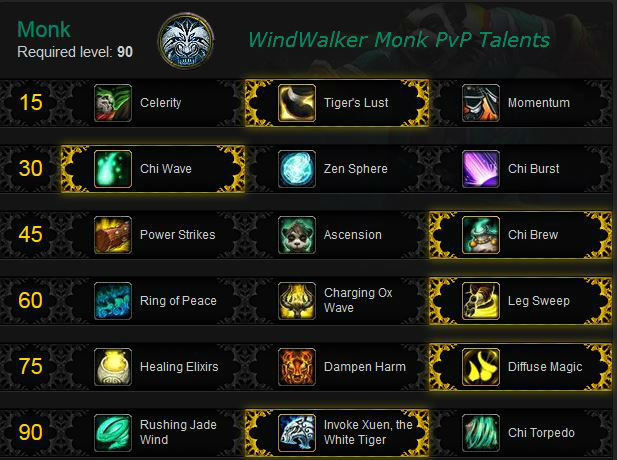 This pick really depends on just who you’re fighting.

Hit – while anything over 3% does you no good, it’s better to be a bit over than a bit under, since missing is bad. Lining up that mighty strike and then missing does little for your chances of winning.

Expertise goes against your opponent’s chance to Dodge after you “hit” him. 3% eliminated the basic dodge chance. Some people recommend higher amounts when fighting dodgy classes, such as Rogues. You might not notice any difference with 3 or 4 more points of Expertise..

Agility improves everything you do.

Haste If Rushing Jade Wind is the preferred talent then Haste might well have a lot more value than otherwise. 10-15% Haste should do you very well, after that start looking to get more Crit. You will be taking Chi Brew as a talent and the added Haste will help with Energy.

Crit, while random, allows more consistent damage than your Mastery, especially when you don’t have brew stacks available.

Mastery will let you accumulate Tigereye Brew stacks more quickly. You will get to blow those stacks more often, since they accumulate faster, but your damage at other times will be a bit less.

PvP Power isn’t worth stacking; the stuff on your gear with be enough.

Resilience gets a nice bonus if you have both PvP trinkets, which brings the total to 80%. You will want to gear for offense, instead of more defense.

Gearing up for Windwalker PvP

Assuming that you’re leveling and doing PvP) and not just buying your way to 90, there’s some PvP gear you can grab before you hit 90 (note that your heirlooms, if you have them, might well be better)

PvP Vs PvE gear? See this post for a longer discussion. Basically, in a PvP scenario (BGs, Arena) PvP gear is superior since high level PvE gear is greatly downrated. PvP gear has a lot of PvP Power which makes up for PvE gear maybe being a few item levels higher. In world ganking (er…. World PvP) there is no downrating of gear. If your PvE set is 40 ievels higher than your PvP set, then use it. As of this writing, in season 15, the PvE gear is downrated to 524, which is inferior to the 522 Honor gear due to that PvP power on the latter.

Are you freshly level 90?

If you have the gold then buy the Crafted Malevolent leather set. That’s good enough to get you started in the BGs, though you’ll want to get better gear soon. In the cases where there are two items available for a slot, eg, wrist, then get the piece with Crit.

If you spend a couple of hours wandering about the Timeless Isle you should be able to get the full (or close to it,) 496 PvE gear from the various boxes and such. It’s not optimal for PvP, but it’s way better than the stuff you were leveling with and it’s at least as good as the crafted set.

Why the honor gear? Because it makes the RBGs and Areas, while earning your Conquest points, less painful. In season 15 the honor gear is 522, which is way better than the 476 crafted gear or the 496 Timeless gear.

You can, if you want, skip the honor gear and go straight to grinding the conquest gear, it’ll just be a bit more painful at first. You might want to consider at least grinding for the honor weapons.

Which Honor pieces are best to get first?

As with the Honor gear… 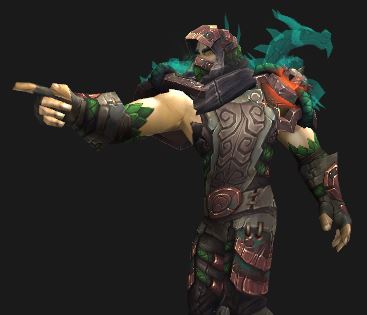 This set is just a cosmetic change and adds no stats or abilities. You need to earn 27k Conquest Points in the current season in order to buy the pieces.

Matching socket colors is generally recommended. If you need Expertise then you should get it through the gems, rather than the enchants, since you get more out of each gem. PvP Power gems have the same stat value as Agility (ie, 160 points) so skip the PvP power gems.

With only a couple of exceptions the PvP enchants are the same as the PvE enchants. So if you’re PvPing in your PvE gear then you don’t have to change anything.

Professions, for a bit of an extra bite

Leveling up Blacksmithing and Engineering is gonna be costly. If you’re not that rich then you should look at Tycoon to help with your gold flow.

Stayin’ Alive (as a Windwalker)

How to do Damage as a Windwalker 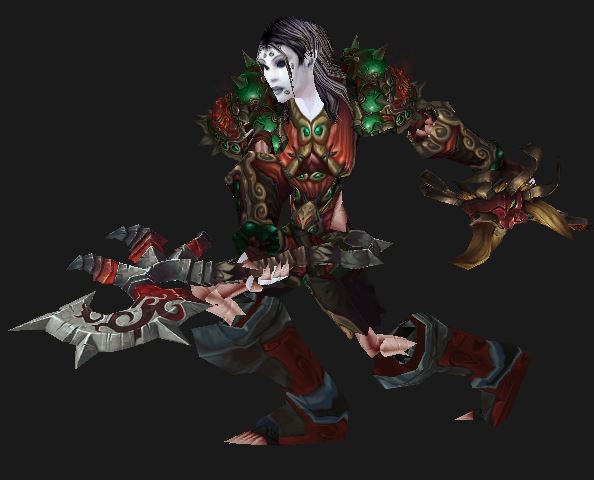 First, be aware of your buffs:

These two abilities should be immediately applied to any target, including when you switch to a new one. They will greatly increase your burst capability.

Also be aware of when/if these get dispelled, so you can re-apply them.

DR = Diminishing Returns. For example, stun #2 will be half its normal duration and #3 will be half of the half.

In order of Priority:

Your Stuns, Mobility, and Self-Healing (Survival)

Your Stuns and Crowd Control

Your basic movement abilities are:

Your basic self-healing and related abilities are:

Monks can do a lot of self-healing. Keep your heals sorted, run and kite, and you will be very hard to take down.

When healing cooldowns aren’t immediately available you can kite the enemy, or run, and give yourself some time. Porting back with Transfer can let you use the Healing Spheres you left there. Make sure you do enough attacking to keep making those Tigereye Brew stacks. Place more Healing Spheres in strategic places when you get a chance.

Switching targets, via Rolling or whatever, is a good way to escape some pressure and let your heals come back.

Keep in mind that you do have to maintain some pressure to keep those Tigereye Brew stacks coming, otherwise your burst will be less than it could be.

If you have a Skill-capped membership you can see a video of a WW Monk going 1 Vs 2 against a DK and a Druid. The Monk wins.

Get Better, Get Skill-Capped Now.

Uses your Tigereye Brew, trinket, and Engineering cooldowns. Slot 14 is the 2nd trinket slot, and 10 is for your gloves.

Macros for the Team

There are a variety of macros you can use for your team members, if you’re so inclined. Detox, Ring of Peace, and Tiger’s Lust are three such examples. What these do is activate the specific abilities on the targeted team member. These are great if you run with a regular team, such as Arena teams, not so much if you’re just soloing or doing random BGs and such.

Here’s an example, just change ‘NameOfPlayer’ to your buddy’s name and the ability as appropriate.

Is your “focus” target getting a bit uppity? You can use several macros to help out. This way you don’t have to drop your current target in order to hassle your focus target.

Touch of Karma on your Focus

This is nice if your focus target is in melee range. For example, you have a Mage targeted and then the melee attacks. The Mage opens up on you and you let the melee take the damage. Occasionally useful. Hand of Protection will get in the way of your Touch of Karma, hence the ‘cancelaura.’ H of P also does not help Vs magical damage. The glyph extends Touch’s range to 20 yards, making it much more useful.

or use it directly:

Use a Spear Hand Strike to interrupt your opponent. Use the ‘shift’ key when targeting your focus instead.

Get more macros, pro level keybinds, and improve your game with the Impulse addon.

Race Choice for the WW Monk

Worgen and Goblins are the only races which cannot become Monks. The most that any particular race will provide in term of DPS is maybe 1% overall, not enough to care a lot about. Still, if you want every bit of burning power for your flying kicks here’s how they stack up.Only the points relevant to PvP are shown here. Note that most of the racials will change in Warlords of Draenor.