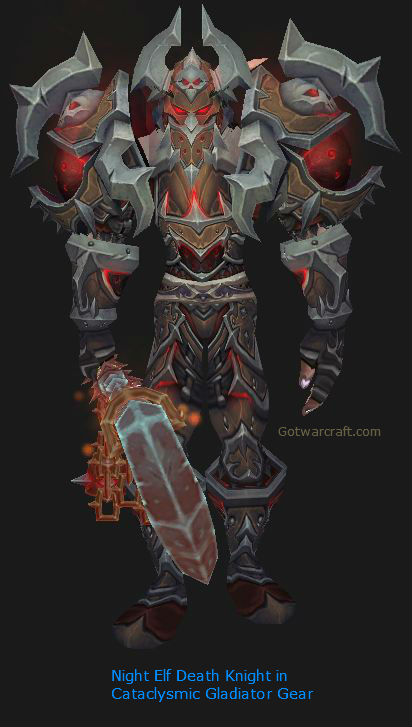 Blood is for survival. You won’t hit as hard as Frost or Unholy, but you’re much tougher than either which gives you an edge. Warlords changed this around a bit and tanks in PvP now hit harder than before and aren’t quite as tough. You will still last much longer than the other two specs.

Learn to Blood and you can have a lot of fun.

If the max level arenas are your game then consider Frost or Unholy.

If you’re not yet max then you won’t be able to use everything on this page. If are interested in getting your characters, all of them,  to max level quickly, take a look at this leveling guide.

The “correct” talents will vary with your preferences, your team, what form of PvP you’re doing (2s, 3s, 5s, WPvP, BGs, duels,) phase of the moon and so on. The picks shown below are for general use, but you should feel free to experiment so that you know what all of them do and adjust accordingly.

Legion pretty much did away with almost all of your glyphs. The only ones remaining are cosmetic only, like the old “minor glyphs.”

Nothing like a bloodier looking Anti-Magic shell and Wraith Walk to improve your tanking, right?

Legion has killed off Multistrike and Bonus Armor. In addition:

“In Legion, as soon as you zone into a PvP instance, the stats on your gear will be nullified, and you’ll be given a pre-determined set of stats that’s uniquely configured for your specialization. Furthermore, any set bonuses, enchants, Legendary bonuses, or trinket effects will be deactivated (although your Artifact and its related Artifact Powers will remain active).”

All DKs value Strength far above all other stats.

The new stats for Warlords are Multistrike and Versatility. There are some tertiary stats, such as avoidance that sometimes appear on PvE gear, but do not appear on PvP gear. You won’t have to think about them.

Legion allows you to enchant a couple of items.

And if you’re not yet that level…

Warlords Notes: There are no head enchants, all shoulder enchants come from the Inscription profession and are only for items under item level 600.

Note that the new enchants can be applied to lower level gear, such as your “new character” gear or heirlooms. They will scale down appropriately and scale up as you level.

The enchants are unchanged in patch 6.2.

How to Blood PvP

You have several methods to reduce incoming damage, you should probably use them. The better you’re able to read what your opponents are doing the better you can pop the right ability.

Stay in melee range to heal (via Death Strike.)

How to Blood PvP

Macros for the Blood DK

This macro is one I’ve been using on an Orc DK that I’m leveling. Orcs have the Blood Fury racial, which increases attack power for a few seconds. Note that you can do the same with any “on use” item or ability, such as a Draenei’s heal, Troll’s berserking, trinkets, etc.

This one Death Coils your mouseover target. You can do the same with any ability, including Death Grip. Mouseover some target, launch the spell, continue to mash your original target.

Keeping that Bone Shield up. It’s 20% damage reduction (all damage) for 8 hits, why not have it up as often as possible? This macro tried to bring it up every time you Death Strike. ’13’ is your “on use” trinket in the top trinket slot. Make sure that you don’t have your escape trinket in that slot. 😉

‘startattack’ makes sure your auto attack is up and running on the target (you switched targets) even if your runes are down.

Lichborne macro – casts Lichborne and then Death Coil on yourself to heal.