Warlords of Draenor is here and there have been a few changes, though not like the last two expansions. Some abilities have been trimmed or moves to one or another spec (for example, you no longer have Shatter, but Presence of Mind is exclusively yours.) Alter Time & Mirror image are now talents. And, of course, ten more levels and a new talent row.

You can see our Mage Changes in Warlords post for more details.

This Arcane Mage guide is primarily intended for Raid DPS use (and other PvE content) at max level. However, the principals will still apply during the leveling process. If you’re looking for more advice on leveling your Mage, check out our Mage Leveling Guide.

Talents can be easily changed to suit particular fights or situations. Keep a stack of Tome of the Clear Mind handy and swap them as necessary. Ditto with glyphs. Note that many of the talents are quite good for general use, so don’t hesitate to experiment.

Descriptions are below the image and our talent picks are checked

. (If you’re still leveling then go here to level faster.) 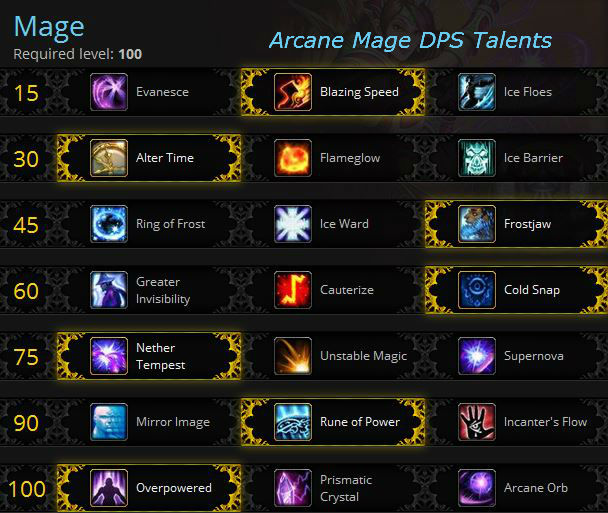 None of these add to DPS, other than allowing you to live long enough to continue dealing your damage.

Which one of these you pick depends on the situation. None add to your DPS and all are only useful against trash.

Mirror is nice for short fights or where a burst phase is required. Otherwise, if you can stay in one place take Rune. If you have to move around too much for that, take Incanter’s flow.

Use the Crystal for single target fights when the mob stays still. Use Overpowered for when he’s running around a lot. For multiple opponents and If you took Nether Temptest, from the tier 5 talents, then Arcane Orb is the most efficient pick.

Warlords note: Your Hit, Expertise, and Reforging are all gone. You have two new stats, Versatility and Mastery, both of which have some (not a lot of) value.

Int is your “go to” stat and is more important than any secondary stat. It is your Spellpower, so improves any damage that you do.

Mastery rewards you for keeping your mana high. So stack this stat way up and keep your mana as high as possible though evocation, potions, good management, etc.

Haste speeds up everything you do, including burning mana. Spells cast faster and DoTs tick faster. Lots of Haste is a good thing, but you will have to watch your mana a bit more closely. Certain items will summon minions to fight for you and this improves the value of your Haste as those minions are affected by it. Mastery will remain better until very high gear levels.

Multistrike gives you a chance for one or two additional strikes at 30% effect. While it’s a straight up DPS add it’s not as valuable as Mastery and Haste. See here for how Multistrike works.

Crit – it’s not that Crit is bad or useless, it’s that the other stars are better.

Keep your mana as high as you can at all times to take advantage of your Mastery. Potions can help keep it up.

Buffs: Mage Armor and Arcane Brilliance should be active at all times.

Arcane Blast is your primary damaging ability and used to build stacks of Arcane Charge.

Arcane Charge is a stacking buff that increases the damage of a number of your abilities as well as the mana cost of some of them. Managing this buff allows you to maximize your damage while at the same time not allowing your mana to drop too low so that we can also continue to benefit from our mastery. Arcane Charge lasts for 10 seconds and stacks up to a maximum of 4 times, each stack providing the following effect:

Your level 90 talent is to be used as available.

You have three cooldowns of interest for DPSing:

More on the Arcane Mage “Rotation”

The following section was taken from Berlinia’s Arcane Mage Guide on MMO-Champion.

The Arcane Mage constantly rotates around two phases, the Conserve Phase and the Burn Phase. The Conserve Phase is what you will be doing most of the time, and is a playstyle that you employ when you want to remain on high mana levels. The Burn Phase on the other hand is the practice of using the 400% increase to Arcane Blast’s mana cost at 4 Arcane Charges to your advantage, in order to burn through your mana as fast as possible.

This phase might seem contradictory to what I just wrote about benefiting from Mastery, but is done because Arcane Blast does a very high amount of damage during this phase. In order to start your Burn Phase you need to keep an eye to your Evocation cooldown, because when you finish burning your mana you want to get it right back up and continue with the Conserve Phase. The Arcane playstyle is a constant rotation between Burn and Conserve cycles.

There is no set rotation for Arcane Mages, just a priority list. This is the priority list for the Mana Conservation Phase which is the phase you will mostly be executing.

This is the basis of the Conserve Phase. Essentially what you do at this phase is that you:

Just like with the Conserve Phase, the Burn phase does not follow a strict rotation but rather a priority list. This phase is heavily tied to the cooldown of your Evocation and can only be started when you are at 4 Arcane Charges.

This is the priority list tied to the Burn Phase. What this list essentially tells you is that you should cast Arcane Missiles as they proc, and then burn your mana until you have less than 50% mana. Due to the high mana costs of Arcane Blast at 4 stacks of Arcane Charges, you will need to know the mana costs of your spells of your spells so you know when to execute the third step of the priority list.

Now that we have defined the two phases, you need to understand how and when to rotate around the two. The Conserve Phase is your rest phase, and is executed whenever your cooldowns are down. The Burn Phase is tied to the cooldown of Evocation which with the perk Improved Evocation has its cooldown reduced to 1.5 minutes. With this cooldown, you can tie every Burn Phase with an unglyphed Arcane Power or you can tie every second Burn Phase with a glyphed Arcane Power

In short: Gem for Mastery

The 35 point gems are dirt cheap, the 50s expensive, and the 75s very expensive. If you have four gems slots (lucky you) you will only lose about 1% Mastery (going from 4x75s to 4x50s) and save maybe 20k gold. If you find yourself short of the cash needed to buy expensive gems then you should see this post.

In Warlords the older gems that used to Hit now add Crit, those that added Expertise now add Haste. Prismatic gems fit any socket and the the Warlords gems require item level 600+.

Older gems with secondary stats have twice the value of gems with primary stats, so your Pre-Draenor Mastery gems are 20 points and your Int gems are 10. Draenor gems match any socket (600+ gear)

Your Mage bonus adds to any Int gem bonuses, making them worth 5% more Int, that bonus does not add to other stats.

In short, use: Enchant Weapon – Mark of Bleeding Hollow – Sometimes increases Mastery by 500 for 12 seconds.

In Warlords the stats squish is in, but since everything is squished your enchants will still have nearly the same relative value. Also note that rings and neck items can now be enchanted. Note that the Mists enchants cannot be added to items higher than ilevel 600.

Gearing up your Arcane Mage

Consumables for the Arcane Mage

Note that Pandarens get twice the food buff. All food buffs last one hour. None fo the Draenor foods add to primary stats (eg: Int.)

Professions for the Arcane Mage

In Warlords all of the profession perks are dead. No more extra Blacksmithing sockets, cloak enchant, etc. You might be best served by using your professions to build a larger gold stash.

Still, they’re not without some value, other than earning gold. See the notes below. The “best” profs? Probably tailoring for the gear and Engineering for the gadgets. For gold? Gathering is Ok. I’ve made a ton with Inscription and a fair amount with Blacksmithing. Others swear by Jewelcrafting. Tailoring and Enchanting can work very well, too.

Garrisons are pretty useful. Get a level 2+ profession building and a follower working in it and you’ll get better production and some other goodies. Note that you don’t actually have to have the profession to make a number of the Draenor items, such as most of your enchants.

Crafted gear works like this: You can make ilevel 640 armor (Tailoring) and 630 weapons (Inscription) and then the items to reroll the stats of the armor & weapons. (Reroll until you get that Mastery & Haste that you want.) You can also make the items to boost your armor and weapons by 75 item levels (in patch 6.2.) This is expensive, but it’s there if you want it. 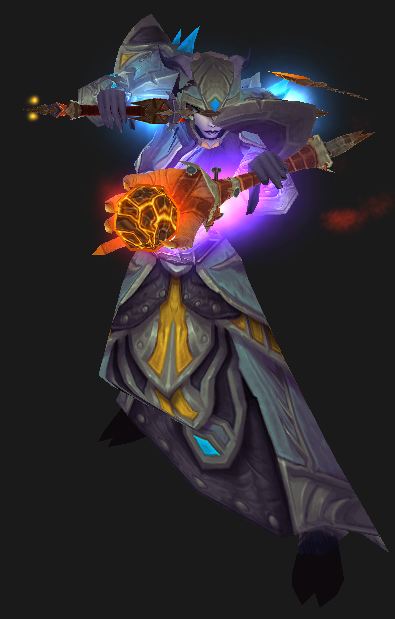 The Tauren are the only race that cannot become mages. Even the Pandarens can be Mages.

In Warlords any racial ability that raised Hit or Expertise is now dead. A few races that had those abilities got replacement abilities. For DPS purposes they are now all very close.

The Best? Draenei get an Int boost and Pandarens get an increased bonus from food buffs. Gnomes and Goblins get a 1% Haste boost. Orcs and Trolls get a burst cooldown.

A nice discussion on “How To Arcane.” Does not covers talents or gear very much, it’s mostly rotations. Leveling a Mage or some other class? It’s pretty easy these days, especially since Mages excel at destroying things. Still, there are a lot of quests and a incredible number of things to kill. Wouldn’t it be nice to have a bit of help in the “where to go and what to do” department?

Zygor’s guide gives you that help, whether Horde or Alliance, at all times. It’s like having an expert showing you exactly where to go and what to do. Zygor’s has even gemmed for Int and, as a result, it doesn’t matter if you stop your questing to gain a few levels in PvP or the dungeons, you’re brand new to the game or you’re decked head to toe in heirlooms. Come back to the quests and Zygor will figure out where you should be, based on your new level, and update the guide accordingly. It’ll even let you zap your obsolete quests.

Did you boost your character? No sweat. Zygor still has your back and will who your where to go and what to do.

You’re not even locked into any particular build. Zygor’s guide has a talent advisor which will recommend talents regardless of your class or spec. All in all you’ll blast to the cap faster than ever before. Even in Shadowlands.

Click here to grab your own copy  and blast to the level cap.