The Outlaw Rogue specializes in sustained damage, as opposed to just burst, making it great for PvE and not at all bad for PvP. You have more weapon flexibility and are better against multiple targets than other Rogues.

In Legion you’re practically brand new. New flavor, new “fantasy,” no abilities and old ones dead. You used to be Combat, now you’re the classic Rogue, an Outlaw. Or a Pirate. Or a Swashbuckler. Or all those and more.

This page is updated for Warlords of Draenor and Legion updates are coming soon.

You do not need a trainer to switch and you now longer have to go to a trainer to get the “Dual Spec” ability. You can now freely switch, anytime that you’re out of combat, between the specs.

Looking at Outlaw Talents for Raiding & PvE – Descriptions are below the image: 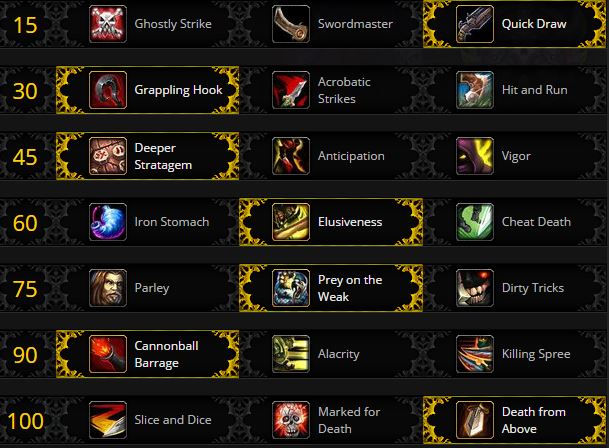 Well, there aren’t any. Not really. You can get a few that are purely cosmetic, but there are none that have any effect on anything you do in any combat.

Glyphs are easily changed. Just pick the new one you want, spend one tome of the clear mind, and slot the new one. Easy. Depending on the fight you might want to do a bit of switching, so have a stack of those tomes handy.

None of the majors are required,

Note that not having your blades poisoned is a much larger DPS hit than having your stats “just so” Also the values of Haste, Mastery, and Crit are pretty close.

In Warlords Hit, expertise, and reforging are all read. You have one new stat: Versatility (improves offense and defense.) You also have an “Attuned” stat (Haste, in your case) which is intended to be the “best” stat for “throughput.” Damage, for Rogues.  This gives you +5% Haste from all sources and comes with your Outlaw Potency ability.

In Legion Multistrike and Attuned Stats are gone.

Stacking stats, now that reforging is dead, is done the old fashioned way. Gems, enchants, and gear selection. New enchants for the various secondary stats can be applied to rings and neck pieces, there are no new enchants for Agility.

In Warlords Tricks of the Trade no longer gives your target a damage add, it simply transfers threat. Since threat isn’t likely to be an issue you should be able to ignore this ability, though it will allow you to attack first and transfer your threat to the tank.

Poisons are now Assassination only.

You want to avoid being energy capped (energy at 100%) as it means you’re not using your attacks. Conversely, blowing everything means that you might not have enough energy to do that next move. Try to keep enough energy to do something without letting it hit 100%.

Various abilities and effects, such as Adrenaline Rush and Heroism, will allow you to spam abilities without running out of energy.

Bandit’s Guile cycles without your input. It starts at 0%, then 10, 20, and 50% (with your perk.)It then resets to zero. Four uses of your Sinister Strike will advance it to the next stage. You can use Revealing strike to delay that advance, if you need to be off your target for a few seconds.

If you can time your strongest finishers and cooldown to align with your peak Guile then you will do a lot of damage.

When facing small groups of targets use Blade Flurry and maintain your single target rotation.

Marked for Death (if you took it) will refresh as your opponents die. You can use it to refresh Slice and Dice or for another Run Through.

Cooldowns and other Abilities

Note that you get a cooldown reduction, from your Ruthlessness ability, whenever you spend Combo Points.

Feint, Cloak of Shadows and Evasion are all potent survivability tools which should be used when you feel them necessary.

Gems for the Outlaw Rogue

Note that Mists of Pandaria gems with secondary stats, such as Haste, have twice the value of those with Agility.

In Warlords the stat squish is in. Your gems have much lower values then before, though their relative value to the rest of your gear should be similar. For example, gems that used to be 320 Haste are more 20. Gems that previously had Hit now have Crit, those gems that had Expertise now have Haste.

For pre-Draenor gear (under level 600) that has sockets:

Outlaw Rogues should gem for Haste.

In Warlords there are no more profession enchants, but you can enchant your rings and necklace items.

Use Agility or Haste enchants where you can.

Warlords Notes: There are no head enchants, all shoulder enchants come from the Inscription profession and are only for items under items level 600. There are new enchants for Neck, Cloak, Weapons, and your Rings. Not for any other pieces. (Not yet, anyway.) There are no more profession enchants.

Pandarens can become Rogues., the only races that cannot be Rogues are the Draenei and the Tauren. Maybe it’s the horns?

In Warlords any racials that gave Hit or Expertise have been removed. In most cases they were replaced with something just as useful, but the Orcs got nothing in exchange for losing their expertise with axes.

DPS: Orcs, Trolls, and Goblins all have abilities which will increase their damage in PvE content. Orcs and troll raicial are cooldowns, so are great when put into macros.

PvE: The Worgen have the best DPS increasing ability, while Gnomes, Dwarves, and Humans have some form of Expertise with certain weapons.

Note: Keep in mind that T of T no longer gives your target added damage, only threat. It’s a lot less useful than it used to be, but for add duty or other extras than come in you can attack full bore and push the aggro/threat onto the tank or off-tank (and not die from your attack.)

Use this for your Tof T button. Fill in the name of the party member who will be the focus of your T of T, such as the tank or off-tank. Fire it off, he gets the benefit, and you don’t have to fuss with target picking or focus changing. This macro will not deselect your current target:

Another option, if you change T of T targets, is to do it with a mouseover. If there is no mousever target then it will do your current target. You can do the same with your focus target, (using @focus.)

This one combines the @focus and @mouseover. If there is no focus or mouseover then it will transfer threat to the target of your target. This will be the tank if you’re fighting the boss and it might be you if you’re fighting some add before the tank gets its attention.

Mouseover a target and hit the Blind button. If there’s no target under your mouse then it will blind your current target. If that target might have a DOT on it then your Blind should be glyphed.

Kick your target. If you hold the Control key it will kick your focus, instead.

Cast gouge and immediately start bandaging. Works just fine when out of combat. One of the Draenor healing potions (Healing Tonic) will heal more and is instant, but will trigger your potion cooldown.

In Warlords all of the profession bonuses has been removed, along with those abilities you once had. So now the value of any given profession is what it always was, making useful items and/or making gold.

Leatherworking can make some useful starter gear and Blacksmithing some weapons. It takes a long time to get the materials though.

Best for cash, but still being useful? Pick two from Herbalism, Skinning, and Mining.

Note that Pandarens get twice the food buff. All food buffs last one hour and need to be reapplied if you die.

Warlords of Draenor foods, as with gems and enchants, do not add primary stats (Agility.) The recipes for the top foods are from our Garrison Food & Drink vendor: Arsenio Zerep (Alliance) and Kraank (Horde.)

Rogue leveling is easy. All specs work well, but Outlaw is more fun.  Regardless of which build you choose you will find leveling to be pretty easy. Still, there are thousands of quests and a bazillion mobs to kill on the road to level 110 (not to mention other players, but they don’t count here.) Sorting out which quests are best and which series of quests will get you to 110 the fastest is another game, which is why we highly recommend Zygor’s Guide.

Grab your copy here or read our review.