Resto shamans are also an incredibly viable healer right now and are arguably the best healer at this point in time. But what makes Resto Shamans so good?  Well, the biggest plus that Resto shamans bring to the table is that they are a versatile healer that also bring a lot of support to a group or comp.

Resto shamans are so good right now because they have great synergy with casters and melee alike. Resto shamans can run anything from Mage, Warlock, Shaman to a melee cleave such as Feral Druid, Death Knight, Shaman. Being able to work with all of these classes is what makes a Resto shaman such a force to be reckoned with.

This list oof talents is with general PvP in mind. Depending on your team and your game you may want to change these around a bit. Fortunately that’s pretty easy these days. Just keep a staock of Tome of the Clear Miind handy (from your reagents or Inscription vendors) and swap as required. (If you still need to get to 90 go here.)

Descriptions and glyphs are below the image 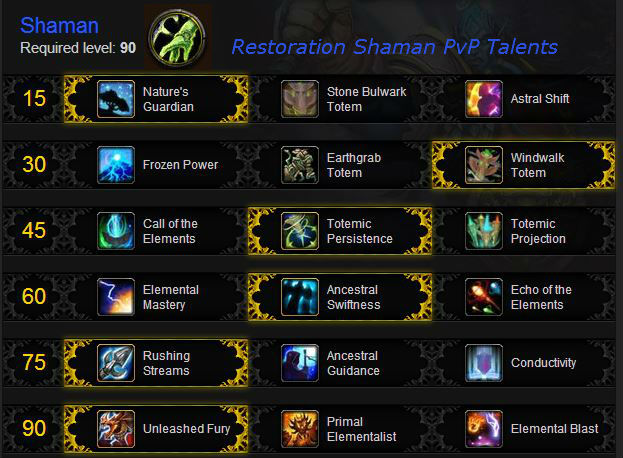 This is a different stat priority than in previous patches.

Crit is now the top choice for stats thanks to Resurgence, a passive ability that restores mana every time you crit (if you’re using Water Shield.) Crits with your Ancestral Awakening summon a spirit to help out with your healing. With lots of Crit you will be getting the large heals and regenerating mana at the same time. (Thanks to the comment below, which prompted this note and the page update.)

Spirit – You have a good amount on your gear and additional Spirit isn’t so necessary. If you’e still going out of mana then get more.

Mastery assist your heals on damaged targets, the more damaged the better the heal.

Haste speeds up everything you do and how fast your periodic spells tick.

Hit and Expertise are not interesting to you.

PvP Power, nerfed hard in patch 5.3 and healers only get 50% of the value anyway. The stuff on your gear will be enough, your gems and enchants shuld be for other stats.

Resilience is at 72% in patch 5.4, which is pretty nice. You also get 10% from the PvP trinket pair (a set bonus) so you won’t need additional Resilience.

Gems for the Resto Shaman

You will want to match socket bonuses, unless the bonus is for a weak stat, like Hit. It might be worthwhile to put the purple (Mysterious) gems in your red slots and the green (Vivid) gems in the yellow and blue slots.

Meta gem: Go with the Burning Primal Diamond until you can get the Tyrannical Primal Diamond. The latter will give you a nice boost to your survival.

Short on gold? If you want to buy the best enchants, send cash to and buy Crafted Malevolent gear for you alts, donate to the guild, lavishly tip the dancing Gnomes & Blood Elves, etc., but don’t have the cash, then see what the Tycoon Addon can do about about fixing your poverty.

The Chest piece is the only Resilience enchant, there are no PvP Power enchants. There is a Conquest points weapon enchant if you prefer the steady PvP Power bonus and disarm reduction to the Int procs of Jade Spirit.

If you’re not yet 90 then do enough PvP to hit the Honor cap for when you do hit 90. You’ll then be able to buy some of the honor gear right off.

At 90 either buy the Crafted Malevolent gear from a Leatherworker or off the Auction House. Either way it’s expensive (need gold?) You can also get gear by looting chests on the Timeless Isle. Why bother? It will be the grind for the honor and conquest gear a lot less painful.

All PvP Gear is the order of bu 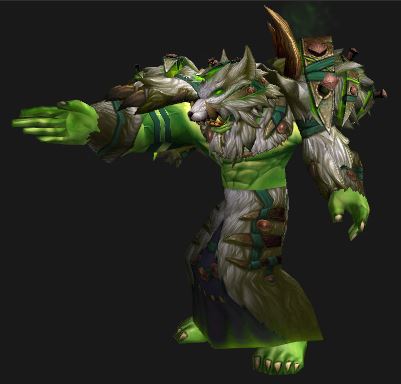 siness for patch 5.4. You do not want any PvE gear (unless you have some raid pieces and you’re doing world PvP or something where the PvE gear is not downrated.) PvP gear has the PvP Power stats and the trinket paid gives you that set bonus for added Resilience, so you effectiveness and survival is that much higher.

Conquest Gear is shown below, with some notes, in the order that you should obtain it. Why this order? It more effectively gives you the important stats and gets you into the set bonuses are quickly as possible.

Note that if you don’t yet have the escape trinket then that is your #1 priority. Next up will be any pieces of gear that are much lower item level than the rest. For example, some piece of green gear that you didn’t replace for whatever reason.

Your Set Bonuses for the gear:

Conquest Gear In Order of Acquisition:

See the gems and enchants above to finish out your gear. The Honor gear will have the same slots.

Reforging: Basically you’re reforging everything into Crit, then Spirit. Check out the ReforgeLite addon (from Curse) if you hate reforging.

For max burst healing you need to have the level 90 talent: Unleashed Fury.

Always use Unleash Elements before any Ancestral Swiftness or Ascendance to get the max healing possible.

Macros from the video above

Generally the crafting professions have bonuses that work out to about 320 Int n value. That’s two Int gems in value. Whether that’s worth it is up to you. It makes for a very expensive pair of gems.

Races for the PvPing Resto Shaman

As a healer your race doesn’t matter all that much. If being big and furry or short and annoying is more important than every last iota of healing power then go for it. That said, here’s the rundown:

How to Get your Shaman to the Level Cap, ASAP

Looking to get your Shaman to max level? How about all  those other alts you want to level though those 90 levels?

With the thousands of quests to 90 and a bazillion mobs to kill (not to mention other players, but they don’t count here) the task of sorting out which quests are best and which series of quests will get you to 90 the fastest is important, not to mention knowing exactly where to go and what to do, which is why we highly recommend Zygor’s Guide.

Zygor’s is an in-game guide and it nearly automates the whole leveling process: you just pick your starting point, at any level, and the guide tracks which quest you’re on, tracks the quest objectives, and automatically advances and updates as you complete your tasks and quests. In addition, a waypoint arrow is set automatically, so you never have to wonder where the goal of your quest is located. All of the important quest info is included in the guide so you never have to wonder what to do. You’ll find that it’s vastly superior to the in-game questing help.