The WoW Warlock Guide for Battle for Azeroth 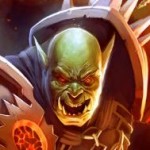 In the face of demonic power, most heroes see death. Warlocks see only opportunity. Dominance is their aim, and they have found a path to it in the dark arts.

These voracious spellcasters summon demonic minions to fight beside them. At first, they command only the service of imps, but as a warlock’s knowledge grows, seductive succubi, loyal voidwalkers, and horrific felhunters join the dark sorcerer’s ranks to wreak havoc on anyone who stands in their master’s way. (source)

This page is a general overview of the Warlock class and does not go into any depth. For that, check the links under “other Warlock guides,” just below. 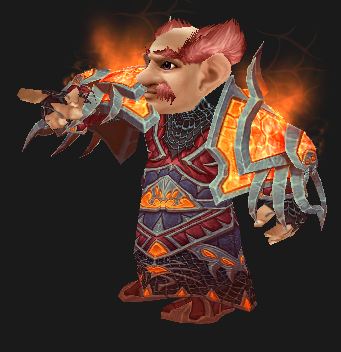 Warlocks are World of Warcraft’s rendition of the classic soul-devouring life-stealing demon summoning class that everyone loves, or at the very least I do.  Quite honestly there’s nothing better than ruling the battlefield with massive amounts of life, ample damage resistance, and the ability to bring down multiple targets at once via a slow and painful, yet inevitable death.

Warlocks rank amongst the caster classes yes, but they stand head and shoulders above both Priest and Mage when it comes to sheer survivability.  Plus, due to an increasing emphasis on high health levels combined with reasonable damage, you’ll find that you generally fair better in the raid instances and become less of a target in PvP as well. 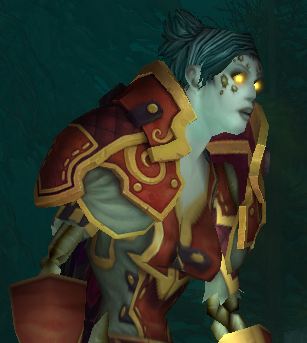 I find warlocks to be one of the more fun caster classes simply due to the large change of play-style gained whenever alternating talent specializations, demonology, affliction, destruction – neither is similar to the other, and that’s refreshing.

Then again running as an affliction build can be quite a bit more interesting, at least so far as Battlegrounds and AoE grinding is concerned.  Hiding behind an obscure bush, rock, or tree and throwing off DoT after DoT at unsuspecting players as they run by is a fun way to ruin the other player’s day.

Finally, destruction warlocks, my personal favorite as usual, for I possess an immense obsession with the art of total annihilation, and nothing suits that better than a warlock knocking down targets in six seconds flat with some well timed, and hopefully critical, shadowbolts.

All in all warlocks have it great, all three talent builds are excellent for leveling, PvP, and even raiding, making it an easy class to enjoy as you have no fear of picking the ‘wrong’ path for a given pursuit in game.

The Warlock Talents and Abilities

Warlocks are all-around engines of destruction, each and every of our specializations (specs) is specifically designed to improve our killing ability, just in a variety of different manners.

Additionally, each one presents an increase to either our survivability, mass killing abilities, or PvP capabilities in its own manner, making them all viable choices for any stage of the game.

Demonology gives you massive increases to all survivability and solo capabilities. Things just get better as you level. Demonology is, in many cases, the easier leveling build, depending on your style of play. By speccing into Demonology you will be doing lots of damage and have lots of survivability and a pet to take any additional pressure.

Destruction is great for endgame raiders due to consistently high DPS, it’s also a lot of fun when blasting away people in BG’s with conflagrate or massive shadowbolt criticals. Destruction is also a very viable leveling build, raining death on all manner of opposition.

You can change your specialization any time you are out of combat. Start as Demonology, for example, then do the next thing as Destruction, do a Battle Ground as Affliction, etc.

You can change the actual talent picks any time you are in a “rested XP area.” That’s basically either the big city or an inn.

Which talents you pick depend on what you want to do.

As for our recommended builds, rotations, specific spec abilities, etc, drop down to any one of these pages for details:

Abilities Shared by all Warlocks

All Warlocks share a set of abilities and those are listed here, on the Warlock Leveling page. Abilities particular to each specialization (spec) are also on that page.

Links to end-game talents are above.

The suggested leveling talents for each spec, including PvP talents (if you like to level with War Mode on, are also on the leveling page. As are the variety of demons to take your soul…er…um… fight the enemy. The demon list.

Want more on Warlock leveling? You can find leveling tips here and a guide that will get you leveled much faster, below.

See the individual spec pages for exact stats and how they apply to the different specializations, this section is just a general overview. Note that your demons get the benefit of any stat boosts you have.

Shadowlands has introduced a “diminishing returns” system for your secondary stats (Haste, etc.) Basically that means that the higher your level of the stats, the less value you get from them. For example:

Warlords of Draenor killed off Hit and Expertise across the board. Since then Resilience and PvP Power are dead, too.  Various other stats have also gone away. Attuned Stats were around briefly, then died. Souls sucked out.

Yes, Warlocks can be very effective in Battleground, Arena, or world PvP, as long as they stay aware of their strengths and certain limitations, eg: cloth armor.

Leveling Tips for Your Warlock 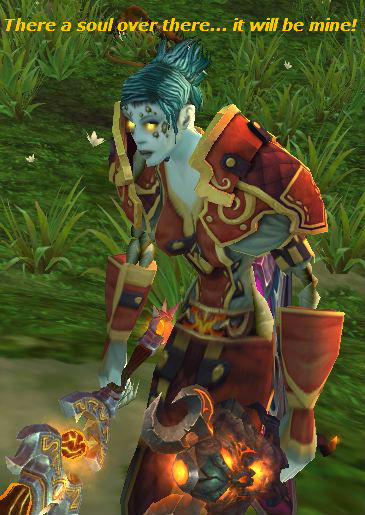 Considering all the multitude of grinds possible in this game, leveling a warlock is comparatively relaxing.  Likely you’ll never find yourself feeling too slow, quests too hard, or really any distress whatsoever considering how easy the process should be. About the only concern will be “where to go next?”

Also, see our Warlock leveling guide and these ten tips.

Like most classes the Warlock has more than a few styles of leveling, and there’s always a way to maximize your XP per hour.

Get Tailoring if you want to make your own gear, Herbalism and Mining if you are leveling (for the XP.) Skinning is good for gold, but provides no XP.

Faster Warlock Leveling,
all the way to the Level Cap.

Leveling with a ‘lock can be easy, fun, and fast, but there’s still a bazillion quests to do and mobs to kill. If your friends are already high level, or if your guild needs a Warlock, or you just want to get into that juicy endgame raiding and/or PvP, then a Warlock leveling guide is just what you need to get yourself to the level cap as quickly as possible.

Zygor’s Guide is our guide of choice. It will note your level, what you have done, and get you moving from wherever you are. Showing you where to go as well as what to do.

Zygor’s automatically updates and advances as you complete quests, sets a waypoint arrow automatically, and includes all the important quest info. You will probably never need to look at your quest log again, much less browse some website for quest info. You’ll also level faster than you ever have before.

While Zygor’s Guide is a questing guide, oriented towards the solo player, it’s smart enough to realize that you might be doing some of your leveling in the dungeons or the Battlegrounds.

Come back to your quests and Zygor’s will detect your new level, advance forward to the appropriate quests, and help get rid of obsolete quests. You don’t even have to start at level 1.

Whether you’re brand new to the game or an old hand decked head to toe in heirlooms, Zygor has your back. Not only that, but what if you want to play around with different specs? Zygor’s comes with a nifty talent advisor which covers all specs of all classes.

Zygor’s is  always quickly updated for all expansions and patches. Get your copy now and get to the level cap ASAP.

8 thoughts on “The WoW Warlock Guide for Battle for Azeroth”