Are Frost DKs in good shape? Yes. But that depends more on you than anything else. You certainly have plenty of damage and some survivability. This page will attempt to take care of the “How To.” If Frost’s your game then chill out, go forth, and kill some players.

If you’re not yet max level then you won’t be able to use everything on this page, but much will still apply. If are interested in getting your character to max level quickly, take a look at Zygor’s leveling guide. 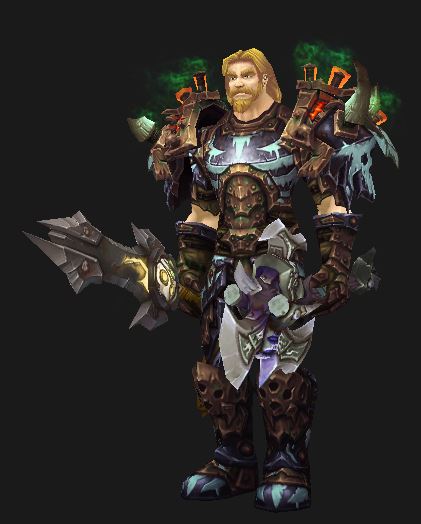 All of the various races bring something to the PvP game, but certain races are better. For more info on all of the available races (and all races can be DK) then see the race list in the DK Overview page.

The exact talents you pick will vary depending on who you’re fighting, who your team (if any) is, and so on. 2s, 3s, 5s, BGs, solo, duels, etc. Keep a stack of Tome of the Quiet Mind handy for just this purpose.

Descriptions are below the image and our picks are checked: 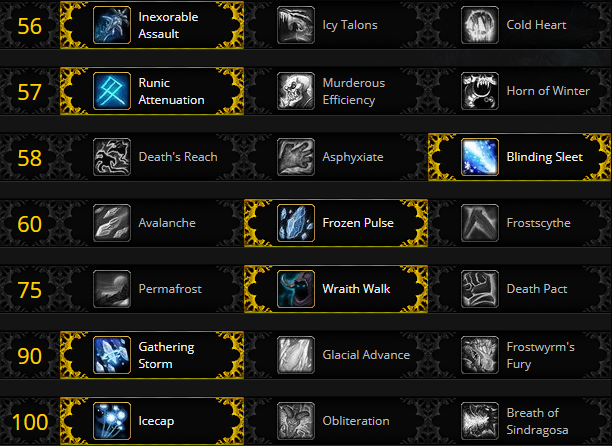 Stats are actually pretty close in value and their value will vary depending on your gear and what exactly you are doing.

Gems, Azerite, and Corruption for the Frost DK

Well, you aren’t. Gemming for PvP, that is. Gem sockets are actually uncommon, but since they do appear on occasion. It makes gemming pretty easy. 1st number is BFA, 2nd is Shadowlands.

Short on gold? Most of the enchants below have similar enchants available, of lesser value, for less cash. Check with the rep vendor or the Auction House for what’s available (or you guild item maker/enchanter.) If you want to buy the best enchants, fund all of your alts, donate to the guild, etc., but don’t have the cash, then see what Zygor’s Gold Guide can do about about fixing your poverty.

Enchanting your max level gear is easy. At max level you can only enchant your rings and weapons.

Obviously these numbers will change in Shadowlands, but the relative value will be about the same.

Gearing Up Your Frost Death Knight

The easy way: Heirloom gear until max level. As of BFA that’s about 13.5k per weapon and 9k each for all the other items. Got the gold?

When you hit level 120 you can but item level 400 pieces off the auction house for fairly low prices. You can find some higher level pieces, but they are not so cheap. World quests will get you items up to 420. ANd then there’s the better gear. See this post for that.

This next section is left here just for the heck of it.

At 70 you can pick up the Brutal Dreadplate set from the legacy arena armor vendors. The legacy weapon vendor will be right there, as well. There are a number of gem slots in this gear, and you can drop a Mystic King’s Amber or a Mystic Autumn’s Glow into all of those slots.

At 85 you can grab the Cataclysmic Gladiator set, but you might find the 450 blues on the Auction House to be better. The Cata gear does come with gems slots, so that’s worth a few points.

If you’re freshly 90 then either buy the Crafted Malevolent set from the Auction House or from a friendly Blacksmith. This will be a bit expensive. See our gold guide if you can’t afford it.

Alternatively you can farm the Timeless Isle for armor tokens from the boxes or drops. This is 496 gear is is about equal to the 476 crafted gear.

If you’ve done a bunch of pre-90 PvP and have that honor you can pick up a couple of the Prideful Gladiator pieces from your base in Pandaria.

This will give you a bit of extra going into Draenor.

Level 91 is something of the “twink” level. You can equip three pieces of crafted gear (item level 640 armor and 630 weapon) which will be way better than anything else you find till you get into the honor gear. You can also bump each of these items by 45 ilevel points (up to 715 in 6.2) which will put them on a par with the PvP value of the honor gear.

The only problem is that you’re looking at maybe 30-40k gold to buy and max out each item. If you’re not quite that rich then wait till 100 and get the PvP gear. Otherwise see our gold guide.

Of you have the gold (or a friendly, generous crafter:)

PvP gear in Warlords has two item levels, a lower one for PvE and a higher one for any PvP combat, whether it’s World or Arena PvP.  Most PvE gear will be inferior for this reason, but the best raid gear will be comparable and there will be no reason not to use it if it’s as good or better than the PvP rating of your item. The PvE piece might also have a gem socket.

Of course, if you’re getting your gear randomly from Ashran boxes or the like then you’ll gear up as best you can.

Modifying Stuff isn’t really going to happen. Crafted gear can have the stats rerolled as many times as necessary to get “the right stats.” PvP and dropped gear cannot be so modified. Crafted gear can also have its iLevel increased (expensive,) but the PvP gear will still be better in PvP combat.

Otherwise you’re left with the enchants, there being no gems (yet) for PvP gear.

Macros for the Frost Death Knight

Most of these, of course, you can take over to any other spec of DK. This forst batch lets you do things to your focus target, while still paying attention to your primary target.

And if you need to cancel your Lichborne effect:

Basic Attack Macro -This makes sure that your auto attack starts against your new target even if you don’t have runes or Runic Power. It also clears the “Hey! You Have No Runes!!” error message from your screen. Replace Name with your ability, such as Obliterate or Frost Strike.

The Burst Macro lines up a bunch of “More Power” cooldowns in one macro. Use it to line up kills or just before using your diseases. “use 14” is your second trinket slot. If your “on use” trinket is in the first slot then use:  “use 13”.  “Blood Fury is the Orc racial. If you’re in regular BGs or world PvP you can also put a potion into the macro, such as: /use Potion of Mogu Power. Casting Raise Dead with this macro means your Ghoul inherits your buffed Str.

Mouseover attacks – You can use these with a variety of attacks. Just mouse over the enemy and use. You can also use it for a focus target, just use ‘target=focus’ instead of ‘target=mouseover’ (or just @mouseover or @focus.) This also keeps your current target. You can make one for Mind Freeze, Death Grip, etc.

If you do not have a mouseover target then it will work on your primary target. Just change ‘Asphyxiate’ to whichever ability you wish to use.

Death Grip – Hold down shift and it girps your focus, otherwise whatever you have targeted.

You can use something similar with other abilities. Hold shift and it zaps your focus, otherwise your main target.

Arena targeting: Assign one of these to each arena number (1-2, 1-3, or 1-5) and it will zap that opponent without losing your current target. Change ‘Spell Name’ to the ability you want to use, such as Strangulate.

Fun with Gorefiend’s Grasp – With no mods it fires off the ability with you as the focus, bringing all enemies to you. Hit the CTRL key and it pulls them all to your pet, which pulls them off your healer or whoever they’re harassing. Hold the Alt key and they’re pulling to your Bladestorming Warrior, to be cut to pieces.

Cancel effects – At times you will want to cancel various effects. For example, Conversion, when you’ve healed enough and don’t want to run out of Runic Power. Keep this as one macro or make it into several.

How to: Frost Death Knight PvP

Even though you’re not Unholy your diseases will be a big part of your damage, you want to apply and maintain them as best you can. If possible use a burst cooldown before applying and spreading them. They scale with your Str. and will hit that much harder for their duration.

At any given time try to line up as many of these as possible.

Now head out and kill someone!