Subtlety Rogues are often thought of as the PvP Gank Machines (which they do quite well, thank you,) but they can also put out some very solid DPS in instances, it just requires a bit more work. If you’re up to it then go for it, the potential is definitely there.

In Warlords that DPS capability didn’t change much. Very nice single target damage, not quite so hot with groups. Your combo points are now attached to you and not the enemy, to target switching is easier and Redirect is dead. For other changes, see our Rogues in Warlords post. See here for the 6.2 changes (buffs.)

Some updates for Legion are here, the rest are coming soon.

The talents that are most useful might vary from situation to situation. Previously you needed a tome of the Clear Mind to change them. No more. You can now change your entire specialization (spec) at any time you are out of combat. Do one fight as Sub, another as Outlaw, another as Assassination, and then switch back again. No reagents, trainers, or anything needed. Just make sure you have your talents set up ahead of time.

Talents can be changes just as easily except that you have to be in a rested XP area, such as an inn, the big city, or your Garrison. If you’re there you can change them as much as you like, no reagents or anything needed.

Note that Ability perks, from Draenor, are dead.

Descriptions are below the image. Our picks are checked: 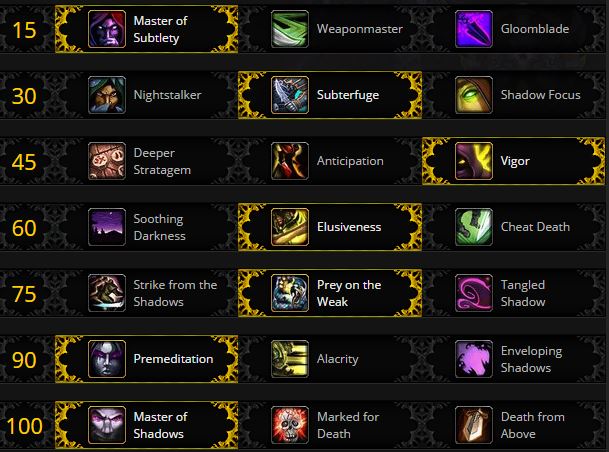 Glyphs in Legion are basically dead. There are a few “minor” glyphs, but they are purely cosmetic, with no combat effect at all. For example, Glyph of Disguise.

Swapping glyphs is easy and can be done almost any time. Keep a stack of Tome of the Clear Mind handy and swap glyphs as the situation demands. If you know the fights well you will be better able to swap glyphs to those special occasions.

Subtlety loves the Mastery and the Crit. Haste isn’t a lot of use since most strikes are instant, but the added energy regen can be nice, so it isn’t worthless. Versatility is nicer in PvP than PvE, but since it’s a straight up damage add it has more value than Haste.

In Warlords your Hit, Expertise, and ability to reforge stats died. You gained two new stats, Multistrike and Versatility. The latter improves your damage and defense, the former gives you a chance for two additional strikes at about 1/3 effectiveness.

Blizzard has also defined “Attuned” stats for every class and spec. As a Sub Rogue, yours is Multistrike. What this means is that Bliz feels that this is the stat which will give you the best “throughput.” In your case, this means damage. You get that additional 5% through your Sinister Calling ability.

Agility: Agility is significantly better than the other stats.

Multistrike gives you a chance at two additional strikes of 30% effectiveness. Each of these strikes can crit and can proc poisons. In addition, thanks to Sinister Calling, your Ambushes and Backstabs will “advance” your bleeds by 2 seconds and add a damage tick. Note that a 20% MS rating only gives you a 4% chance to MS twice. (20% x 20% = 4%)

Crit makes anything hit harder, when the numbers are right.

Haste speeds up your energy regen and your attack speed, so you get more attacks and faster energy regen. Mastery and Crit will be better for your overall damage, however.

Versatility is a straight up add to your damage and healing and, at half value, damage reduction. Not enough to bump off the other stats.

Stacking stats: Since Reforging is dead you will have to get your additional stats the old fashioned way. That is – through gear choice, gems, enchants, and whatever player buffs are to be had.

Gems and enchants do not offer Agility, so additional Ag. will come from gear and buffs.

Shadowstrike in stealth or Shadow Dance, backstab out of stealth, finish with Nightblade to apply a DOT, otherwise Eviscerate or Kidney Shot (depending on the target.)

Note that Combo Points stay with you, not the target. Tricks of the Trade Puts aggro onto your chosen team member, allowing you to attack first and give that aggro to your tank. Shadow Blades is back. Backstab no longer requires you to be behind the target, but you get a damage bonus if you’re behind or to the side. Ambush is replaced by Shadowstrike.

Ability perks, from Draenor, are dead.

Poisons are Assassination only in Legion.

You have a couple of abilities which make it valuable to attack from stealth as often as possible.

Your mastery improves all finishing strikes. You will be rotating between Eviscerate and Nightblade.

Try to refresh your 5 CP Nightblade with 5 seconds or less remaining.

In order of priority:

How to Shadow Dance

Shadow Dance gives you 3 seconds (5 with the Subterfuge talent) of murderous efficiency/ Here’s how to do it right. Practice this on the target dummies until you have it down.

When facing multiple targets numbering about 5 or more begin using Shuriken Storm as your primary attack and alternate it with Eviscerate to spend the CPs generated.

Cooldowns and other useful Abilities

Agility is your best stat. Remember that your leather bonus adds to your Ag. Unfortunately there are no Warlords or Legion Agility gems or enchants.

Gemming in Warlords of Draenor and Legion

Short on gold? Most of the enchants below have similar enchants available, of lesser value, for less cash. Check with the rep vendor or the Auction House for others. If you want to buy the best enchants, fund all of your alts, donate to the guild, etc., but don’t have the cash, then see what the Tycoon Addon can do about about improving your situation.

Helm enchants are gone in Mists of Pandaria

, shoulder enchants all come from the Inscription profession.

In Warlords you can now get enchants for rings and neck pieces, but the profession enchants are all dead. Enchants that previously did Hit have been changed to Crit, those that had Expertise are now Haste.

Macros simply wrap several commands into one (or maybe two) keypress. They make sure you use certain abilities in the right order and just make things easier. See our how to macro post if you want help getting started. If you want more macros, keybind help, and more, all in an addon, check out Impulse.

Casts Tricks of the Trade on your DPS target or tank by name. Manually change the name to that of your target. Note that Tricks no longer gives your target a damage buff, it now only transfers threat. This will let youi attack first or burst to your evil little heart’s content without worry about drawing aggro.

You can also use @focus or @mouseover to tricks your focus or mouseover targets.

If you hold down the CTRL key then this will Kick your focus target, if it’s kickable. Otherwise it’ll kick the current target. You can use ‘alt’ instead, if that works better for you. This format works on other abilities, such as Blind.

This macro activates your trinket and casts Shadow Dance. Click it a second time for Ambush. Note that   ‘/use 14’ activates your “on use” trinket that you have in your second trinket slot (‘/use 13’ is for the first slot.) Yes, you can use all three, but test it on the dummies first so that you’re clear on exactly how they work together.

This one blows both ‘on use’ trinkets (if you have them.)

Symbols of Death and Shadow Dance.

All of the professions have had their special bonuses removed in Warlords. There is some nice gear that’s worth making and some of them are pretty good for making gold.

As Subtlety your consumable choices are pretty simple. Agility all the way. Your leather bonus adds to these numbers.

Note that Pandaren Rogues get twice the food buff. All food buffs last one hour.

Remarks on Race for the Subtlety Rogue:

Any race except Tauren and Draenei can be a Rogue.

In Warlords any ability with Hit or Expertise has been removed and replaced. Except for Orcs. They just lost an ability, not that Axe expertise was any use to you anyway.

Rogue leveling is easy. All specs work well and regardless of which build you choose you will find leveling to be fast and smooth. Still, there are thousands of quests and a bazillion mobs to kill (not to mention other players, but they don’t count here.) Sorting out which quests are best and which series of quests will get you to 110 the fastest is another game, which is why we highly recommend Zygor’s Guide.

Zygor’s Guide is always updated for the latest patches and expansions, so is never obsolete.  Grab your copy here or read our review.

Related Pages and Such