The Rogue Changes Coming in Warlords of Draenor

Things are changing for Rogues in Warlords of Draenor, though (thankfully) less than with the last couple of expansions. There is no world breaking and no complete overhaul of the talent system. There are a number of “tweaks” coming, however. These are intended to streamline the game a bit and make our action bars a bit easier to manage. Keep in mind that all of this may change by the time Warlords is released and will probably be patched & hotfixed for some weeks after that. First off is…

Also note that all of the links below are to the Warlords version of the abilities, not the Mists version.

As you may know by now, the Hit and Expertise stats are dead. Reforging is also going away. Bliz decided that they were “not fun.” These stats are replaced by new secondary stats: Bonus Armor (for tanks,) Multistrike (grants a chance for spells and abilities to fire up to 2 additional times, at 30% effectiveness,) and Versatility (Increases damage, healing, and absorption done. Reduces damage taken.)

For a time there was a “Readiness” stat, which reduced cooldowns. This stat has been slain.

Agility and the Crit

Agility no longer provides an increased chance to critically strike with any abilities. Everyone now has a base 5% chance to crit. Rogies (and other Agility Dps classes) now get a passive ability, Critical Strikes, that adds 10% to the base chance to crit.

Agility now adds 1 Attack Power per point, down from 2. Various other tweaks to the AP calculations will compensate for this.

Stat “Attunement”: Blizzard is going to assign one stat to every class and spec that it figures will be a solid “throughput” stat. This stat will receive a 5% bonus, and should be the best choice for raw damage. Depending on what you’re doing, exactly, you might still favor another stat. These “attunements” appear along with various abilities.

Changes to the Rogue’s Abilities 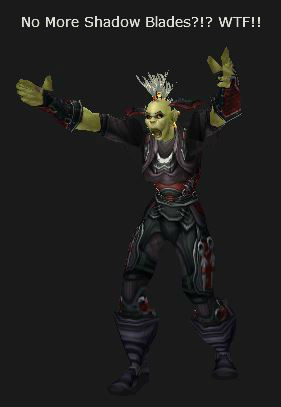 Ability Pruning. It’s just like it sounds. Prune a few “less useful” abilities from the ability tree. Blizzard is doing this to make the action bars a bit more manageable, by having a few less items to put there. Rogues are actually receiving less pruning, nipping, and tucking than some of the other classes.

Abilities That Are To Be Pruned

Changed, but not pruned

Earlier on in the beta various Assassination abilities allows use weapons other than daggers. Those changes were removed and you’re back to daggers only.

Those master backstabbers, Subtlety Rogues, have a few tweaks to clean up their ability lists.

Perks are what we get instead of new abilities as we level past 90.

Some classes get different talents depending on their spec, but all Rogue specs have access to the same talents regardless of spec.

The Changes to Rogue Glyphs

Glyphs are undergoing changes, as well.

As you level your Rogue you will automatically learn certain glyphs, just as you do talents and abilities. The rest of the glyphs, which will change as they always do with expansions, will still be available on the Auction House.

Here are the glyphs that your Rogue will be automatically learning:

Dead Glyphs: None. The glyphs that are automatically learned will not appear in a scribe’s glyph list, though.

Perks are acquired randomly as you level from 91 onward. So a level 95 Rogue might have a completely different set of perks than another 95 Rogue of the same spec. By level 100 they’ll both have all the same perks. The order of perks shown here is, therefore, not the order in which they will be acquired.

Earlier in the beta test there were a lot more perks. Some of those are now dead, others were incorporated into other abilities. As of now everyone will get four perks. All of the perks are passives. Some are pretty sweet.

Sensus Discusses the Upcoming Changes to Rogues in Warlords of Draenor.

1 thought on “The Rogue Changes Coming in Warlords of Draenor”