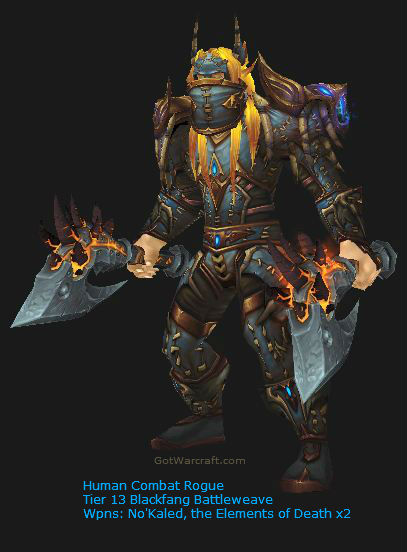 The Patch 5.4 Rogue changes are mostly pretty good. Eviscerate does less damage, but a number of other buffs more than make up for that. You’re dodgier than before (Evasion buff,) get more from Recuperate, and got a number of positive changes to your talents. Combat even got a new ability.

PvP notes: Your (everyone’s) Resilience is now 72%, so geming for the stuff isn’t a good idea. Dodging is now better for all Rogues. The change to Killing Spree makes it a far more effective ability for single targets (PvE included) than before. Combat’s other buffs will help out, too. Assassination’s Dispatch and Mutilate now hit significantly harder, as do Sub’s Backstab and Hemo. Shadowstep’s cool down was reduced and the rage of Cloak and Dagger was doubled. The reduction in energy cost of Burst of Speed means that flag carrying in certain battlegrounds might be a lot more interesting. The new Glyph of Redirect makes your redirect ability a lot more useful. More 5.4 PvP notes.

PvE notes:  As noted above, more damage is always good and all specs get some damage buffs. Fan of Knives will help with trash, especially when glyphed, Recuperate will help your healers, Combat should be able to pump out more and more consistent damage with the change to Vitality and the new (old) Ruthlessness ability. The patch 5.4 Rogue changes to all of the level 60 talents should make movement more effective.

The official patch 5.4 Rogue changes (and all the others) can be found here. If you’re not yet 90, or you have alts youi need to level, then go here.

With Eviscerate doing less damage and the following abilities doing more it looks like Crit might become more valuable than mastery, since the latter adds to your finishing strike damage, which got hit, while your basic strikes got buffed. .