You should begin pulls by using outbreak to apply diseases, followed by using Heart Strike to cement control over the mob.  Death Strike is our survivability mechanic and should be used only after you’ve taken damage due to it scaling with damage taken in the last 5 seconds.

Maintain your diseases at all times, refreshing them using Outbreak unless it’s on Cooldown in which case you can use Plague Strike and Icy Touch.

As the fight progresses use Death Strike whenever possible as well as Heart Strike.  Rune Strike should be used whenever your runes are depleted or when you’re nearly runic power capped.

Heart Strike and Rune Strike offer threat and damage, but Death Strike is a must use if you’re taking a large amount of damage.  Finally, Horn of Winter can be used to immediately generate Runic Power.

In multi-target situations Death and Decay should be dropped to start the fight.  Diseases should be then applied by using Outbreak followed by Pestilence.  Use Heart Strike to maintain agro if you’re fighting 4 – 5 mobs, or Blood Boil if fighting a larger group.
Otherwise use Death Strike and Rune Strike as part of your regular rotation.

Reforge the Crit and Haste from your gear into Mastery, if possible.  If a piece of gear already possesses Mastery, reforge those stats to Parry or Dodge depending on how much you already have of either value. Since Strength adds to Parry your Parry rating will probably be much higher than your Dodge.

Unless a socket bonus offers at least +20 Mastery, it’s more effective to gem for pure mastery and ignore the bonus.

If you have the gold to leveling it up and by epic gems then Blacksmithing will allow socketing of two more of the Epic gems, making it superior to other professions. 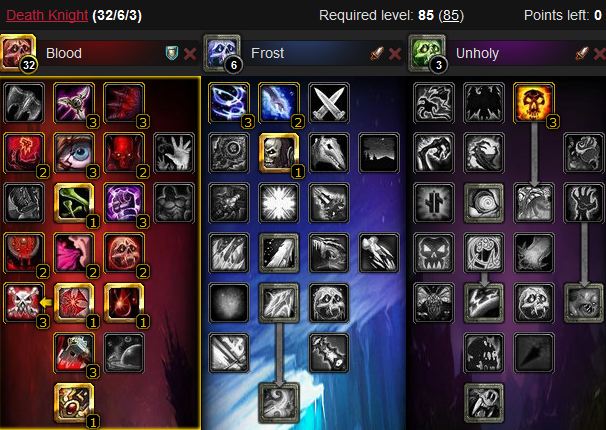