The Druid has it all, heals, tanking, damage… here we’re just going to focus on the Feral Cat and doing as much DPS as possible. That said, you should be ready to use your other abilities, such as Rebirth, Tranquility, or Innervate, and use CC if called for. If you have the skills and the interest then being prepared to use those abilities or pop into bear form for tanking duties is a good thing.

The goal of course is not necessarily to top the DPS meters, though you certainly can, but to help the raid win.

Glyphs come in three varieties, Prime, Major and Minor.  While Druid have a vast number of abilities to pull from, the glyphs that are useful to Feral Cats are more limited. Thankfully.

Here are your highest priority abilities:

To maximize your DPS, keep the faerie fire armor debuff effect active at all times.  Attack priority is to keep your variety of Bleed DoT effects active, while also using self-buffing effects such as Tiger’s Fury whenever possible and Ferocious Bite when nothing else is needed at that moment.

All of the secondary stats (Hit, etc.) seem to be very close in value, unlike most other classes and specs. For A of E situations Hit and Expertise will have more value than in single target applications. What this also means is that there isn’t a “cookie cutter” stats value for Feral DPS.

Hit and Expertise are weak since so much of your damage is DoT (Damage over Time) based. Once the DoT is applied you don’t need Hit or Expertise for that damage to continue. You still need it to actually apply the strike/DoT/etc. This is why Hit/Exp aren’t superior to other stats, as they are for other classes.

For a DPS Feral Druid, the most important stats to reforge into are Mastery, Crit, and Haste.

If you occasionally perform other roles then the relative values of the stats might change. For example: Bear form, which has more value on Mastery.

Agility is much more valuable to you than any other stat. This means  that unless your socket bonus is 14 or so Agility per socket (eg: three sockets shold give a 42+ Agility bonus) then you should just equip the red Delicate gems and ignore the socket bonuses.

Epic Cata gems are very expensive and hard to get. It’s not a big DPS loss to drop down to the next best gem. You will also save a lot of gold.

Each of the professions provides a self-only bonus of some sort that averages out to about 80 points of Agility. With the Introduction of epic gems in path 4.3 Blacksmithing pulls ahead since its special ability adds a gems slot to wrists and gloves. This allows you to insert two more +50 Agility gems for a +100 total Agi. bonus, as opposed to 80 total for the others.

Engineering’s Synapse Springs offers a much larger bonus, but on a cooldown. So it’s great for those times when you need to push hard on the DPS. 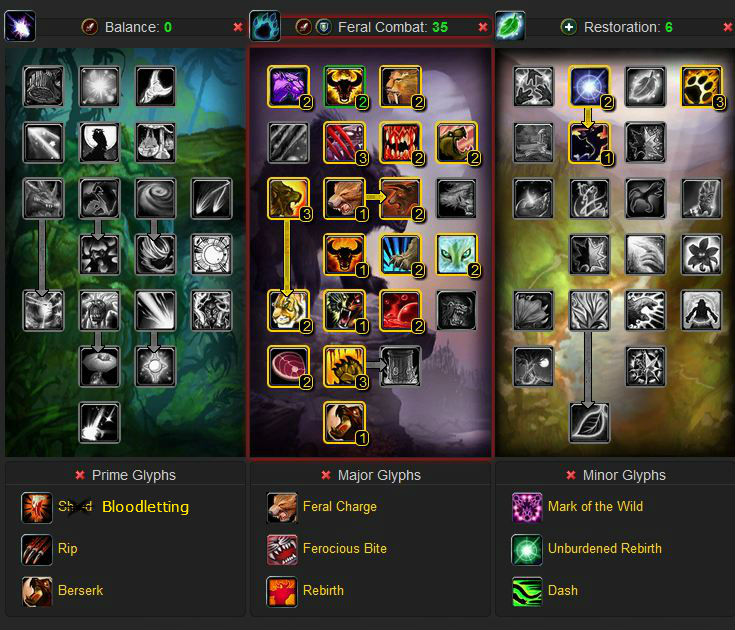 View this build on WoWhead