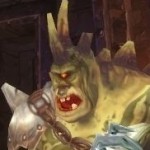 The first ability you’ll probably see him cast is an AoE ability called “Quake”. Everyone in your party will have a dust cloud under their feet, and will take roughly 9000 damage a second on heroic if you don’t move out of the cloud.

After the cast is finished, a total of 5 adds will spawn from the clouds (these still spawn even if you move out of the quake.) The adds will melee your tank for about 10k, so with 5 adds and the boss, your tank will need loads of healing. Even though you can kill the adds now, it’s easier to wait and take care of them with a later mechanic (Chains of Woe – Skullcracker).

To make the tank damage even worse, the boss will randomly do a “Mortal Strike” which will reduce the healing your tank receives by 25%. Because of this, you will want to use a defensive cooldown when the adds are up or your tank will get destroyed.

The third and final attack is called “Chains of Woe”. At 66% and 33% the boss will summon everyone into melee range, chain them in place, and start casting something called “The Skullcracker”. The chains count as one mob, and should be single killed as soon as possible.

After you break the chains, run about 20 yards away from the boss, so you don’t get hit by the boss’ Skullcracker. Now, you’re probably wondering at this point what to do with the adds that you ignored before. The Skullcracker can hit the adds, too, so just leave them alone until the boss uses skullcracker. If you kill 10 of the adds this way, you’ll also get an achievement.

Review (Important Abilities):
Quake: Move out of the dust clouds. 5 Adds will also spawn from them.
Chains of Woe: DPS focus on the chains and run away from the boss before his AoE cleave.

Rom’ogg Bonecrusher
Clear the adds in the front half of room before the fight. Move out of the dust clouds. Adds spawn in the dust clouds, have the tank pick them up. When he puts the group in Chains of Woe, dps down the chains and then get away from the boss before he does his AOE cleave.

Ok, the first thing you need to know is that 100 stacks of Evolution = MC player/Evolved Zealot. So you don’t want to let her get 100 stacks on anything or anyone.

She casts a fear called Dark Command. It’s best to put an interrupter on it, or dispel it. Purple beams flow from the dragon above your heads to the Zealots kneeling in front of her. Use as many ranged dpsers as you can to block the beams from reaching the Zealots by standing in between the Zealots and the beams. Beams place a stacking debuff on whoever it is currently hitting. Move out of beam when you get to ~80 stacks, move out to drop stacks, move back in immediately.

Corla, Herald of Twilight
Have a ranged DPS stand in each of the beams. When you get 80 stacks of the debuff, move out of the beam until it falls off, and then get back in for 80 stacks. Rinse and repeat. Make sure to interrupt when she starts casting Dark Command (her fear ability).

For every tick he is in the pillar of fire he will cast an AoE, the higher his debuff stack, the harder the AoE hits. When the debuff drops, elementals spawn on the outside and have to be pulled to the bottom of the ramp and killed there. Use a DPS with Taunt-like abilities if available. Drops lava pools on their deaths, when boss is placed in said lava pools, it emulates him being placed in the lava stream.

Karsh Steelbender
Have the tank dip him in the lavafall for 1-2 stacks, pull him out for 4-5 seconds, dip him in for 1-2 more stacks, rinse and repeat. The trick is to never let the debuff fall off or he spawns adds. He cleaves so stay behind him.

Use as many Beast CCs as you can on the three puppies in front of her. Don’t kill Runty (he does not engage with the rest of the group, he will enrage the boss when killed). Kill any remaining puppies, they place lava pools on the floor, get away from them. Kill boss.

There are three adds that need to be kited/OTed throughout the fight. They place healing debuffs on the kiter/OT if they are close enough. At 66% and 33% the boss will switch places with one of the adds. Pick him up quickly and burn him down.

How to Ascendant Lord Obsidius:

Gold and much more, get it here!