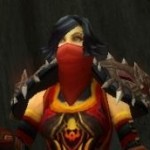 A lot of people, me included,  think that The Deadmines is one of the very best dungeons in the game. For the level 85 crowd it’s been touched up a bit with a couple of new challenges and a bit more difficulty.

This is the first boss in the deadmines.

DPS: Glubtok will use Fists of Flame and Fists of Frost so don’t stand near the tank. Also, be prepared to run to the tank when Glubtok blinks/drops aggro and attacks a random team member.

After 50%, he is untankable, and he will spawn a moving Fire Wall, with himself at the center of the Fire Wall. Melee needs to watch out for this. Just keep dpsing him as you run clockwise around him.He will also spawn adds and drop icicles.

Tank/AoE adds and avoid all the bad stuff then burn him down.

Not getting hit at all grants you an achievement.

Here’s a video with some decent commentary:

Avoid the bombs that spawn on the ground. Don’t bother killing the minions. When he jumps off the Oaf and attaches himself to one of the players, just keep attacking the Oaf.

He will attach bombs onto a random party member’s chest; that person has to run away from the rest of the team. The bomb will hit for about 50k and is not avoidable. It can be very dangerous if the tank is targeted.

The Oaf will also pick up someone and charge into the wall with him. Just heal him up and this should be no problem. After Oaf is dead, just dps the goblin.

Here’s a “How to Helix” video:

The player controlling the Prototype Reaper needs to stay at the bottom of the ramp and be ready to pick up the Molten Slags that spawn.

When a Molten Slag spawns, the person in the Robot should use 1,1,2 (Reaper Strikex2 and then Reaper Charge) until the add is dead.

The rest of the party will handle the boss halfway up the ramp. You need to avoid both of his skills (Overdrive and Harvest) by moving out of the way. If you can’t then bubble, ice-block, or otherwise avoid massive incoming damage.

When he gets to 30% he will use Safety Restrictions Off-line, so you will want to use all your cooldowns at this point. This cannot be dispelled.

Note that, in the first video, they don’t pull the Reaper up the ramp, which makes things a bit harder.

This one is from a Mage’s point of view.

Save your dps cooldowns for 25% HP.

The tank should drag him into the captain’s cabin, facing him toward the back wall. Everyone else needs to stand near the doorway to avoid the bosses cleave (Swipe).

Tank and spank to 75%. Ripsnarl will then vanish. When he does this adds will spawn, and everyone needs to kill them as quickly as possible. Once Ripsnarl comes back there will still be adds spawning and they won’t stop spawning. At this point you should have one dps assigned to killing the adds before they explode and cause a wipe. The other DPS need to kill Ripsnarl fast enough that he vanishes before reaching 20 stacks of his Thirst for Blood buff.

Continue this until 25%. Use your major dps cooldowns and finish him. Make sure that the person assigned to kill adds is still only killing adds.

Cookie will be untankable for the whole fight. Rotten food will leave an AoE on the floor and when ingested will place one stack of a DoT (Nauseated) on you. Eat good food to remove one stack of the DoT. If you only eat the good food you will gain one stack of Satiated. Keep DPSing the boss. The tank can go DPS spec for this fight. A paladin can bubble and eat all the rotten food if you want.

The following strat is from Chancakes on wowhead. All credit goes to him.

Vanessa VanCleef is a unique encounter. Rather than attacking her directly a majority of the fight, you will first fight the previous bosses in their ‘nightmares’. The fight is initiated by clicking the note left behind after defeating Captain Cookie. A short bit of dialogue goes on, and the nightmares begin.

Phase One – Glubtok
The fight begins with your group being lowered into the forge. You must click the vent levers on all sides of the forge (they sparkle), so that you may escape to the ground. Fire will be all over the floor, and large circles will appear on the ground where rocks will fall, dealing damage. AVOID THE FIRE at all costs. It deals massive damage, and dazes. The falling rocks deal significant damage as well, but it are more survivable.

Your group must make its way over to Glubtok, who is at the far end of the room. At the bottom of the ramp, the fire is impassable simply by continuing down the ramp – it may be avoided by jumping over the side. The rest of the room has small paths for you to navigate your way around the fire. Once you reach Glubtok, it is a simple tank and spank to defeat him.

Phase Two – Helix Gearbreaker
Helix will spawn where Glubtok has died, with spiders all around the rest of the room. If your group stays close to Helix’s spawn point, it is possible to aggro very few spiders. Should you have a group member aggro more spiders, the tank should pick them up. They deal significant damage, and should be avoided. Helix is another simple spank and tank.

Phase Three – Foe Reaper 5000
You will continue through the door behind Helix into the tunnel. There are several rotating chains of sparks that you must navigate your way through (reminiscent of the slimes in Naxxramas). DO NOT touch the sparks – they are a one shot KO. There are a few places around the room, between the spark chains, where it is possible to stop and resurrect someone should one of your members fail. Once you reach Foe Reaper, it is as simple as the previous encounters to defeat him.

Phase Four – Admiral Ripsnarl
In this phase, you will need to save the members of Admiral Ripsnarl’s family, by saving them all from the worgen attacking them. None of them are allowed to die, or the encounter will be failed. The first to be saved is Emme Harrington, at the end of the dock immediatley ahead. Simply have the tank pick up the three worgen attacking her. She will grant you a run speed buff, and your group will continue straight down the dock to save Erik Harrington., who also has three worgen attacking him. After saving him, continue up to the ship. Take a right at the top of the ramp, and continue to the top of the path. Here, Calissa Harrington is being held over the ledge by James Harrington. You must kill James before he drops his wife. There is no tanking required here, so your tank may throw on a two-hander/switch to cat form to assist in DPSing him down. Continue up to the top of the ship after his defeat, where the next phase begins.

Phase Five – Vanessa VanCleef
This is the final phase. Your group will fight Vanessa directly, now. Overall, she is not difficult – she will spawn adds which need to be tanked and killed to keep the group from becoming overwhelmed. She will occasionally pop deflection, and shadowstep to different members of the group. During the fight, she will periodically become unattackable and threaten to blow up the ship. Your group must run to the edge of the ship (opposite of where you entered from the dock), and click the ropes on the ground to swing away before you are killed. NOTE TO DRUIDS – you CANNOT click the ropes while shapeshifted, so make sure you switch to caster before you hop on the rope. This rinses and repeats until she has 1 HP remaining, during which you will swing away from the ship again, and she will detonate the final explosives along with herself.

Note, that should you die in the previous phases, you may start the encounter over by teleporting to the forge. Make sure your group is buffed, mana’d up, and prepared before re-entering the forge, as there will be fire all over the ground and rocks still falling. Besides that, the encounter not overly difficult and is one of the more enjoyable, unique fights in the game. Good luck, and have fun!