Before you start, we have a pre-heroic checklist that you might find of use, especially if you’re not a veteran of the Heroics. It also includes a link to basic DPS, Heal, and Tank tactics. It’s here: Cataclysm Heroic Dungeons.If you need the gold to pay for repairs, gear, potions, gems, enchants, mounts, 310% flying speed, pets, frivolous vanity gear, etc., then take a look at our gold guide or a far more extensive gold (and more) guide: WoW Crusher.

The Halls of Origination are part of the Titan research facility of Uldum. Along with Ulduar and Uldaman, it was used by the Titans thousands of years ago. Unlike the other two, Uldum’s purpose was not to be a prison – it was used for research and development of new races. One of those races was the Tol’vir – a mix between humans and cats, most of which populate the other Uldum dungeon, the Lost City of the Tol’vir, 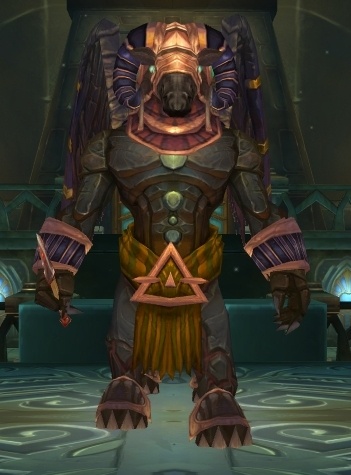 Before the fight make sure that people know about his shield and that they will have to pull the levelers in the pit to the right and left of the platform. At 66% and 33% health Anhuur puts up his Shield of Light and Reverberating Hymn. The former makes him immune to attack and the latter is a stacking DoT that can become painful.

Then get back up ASAP to interrupt the Hymn.

Avoid the Burning Light on the ground and dispell/interrupt the Divine Reckoning to keep Anhuur from healing.

to get I hate that song achievement.

1) Tank jumps down and collects the snakes prior to engaging Anhuur
2) Tank pulls Anhuur and DPS ignores snakes entirely
3) When Anhuur shields, 2 DPS run for the levers
4) Tank or remaining DPS interrupts Reverberating Hymn
5) Repeat for the second shield

How to Temple Guardian Anhuur 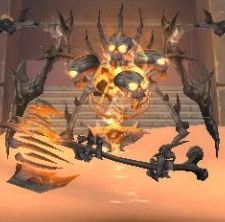 Not a complicated fight and this boss is optional.

This boss does a cleave attack, so try not to fight him from the front.

Stay out of spikes that first appear as dust clouds on the floor.Stay away from weather events (cyclones.)

Boss breaks apart at 50%, and the adds spawn. Round them up and AofE them down. Avoid tornadoes and quicksand. Kill boss. 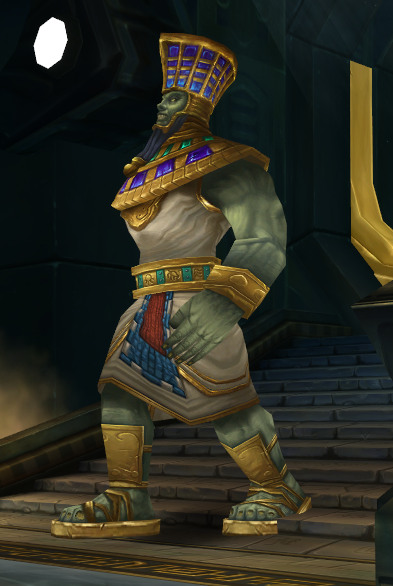 This is the guy you face after defeating the four elemental mini-bosses. He’ll come into the room and obliterate all trogs (and you, if you’re low on health.) Heal up and get started.

Casts Alpha Beams, often, targeting random players. AB places purple void zones on the floor. Stay out of them.The tank will, as with so many bosses, have to move this guy around a bit to stay out of the puddles and allow the melee DPS to attack. Also casts Omega Stance which damages everything in the area. Stay grouped to make life easier for your healer.

Nemesis Strike is a DoT which will be cast on the tank and needs to be dispelled.

Crumbling Ruin is a debuff which reduces the HP of all members of the group. This means that the tank will be increasingly fragile as the fight does on and the healer might not be able to keep him up. Try to kill this boss quickly.

These are the four bosses in the final room. Rahj is the only one who is required, but many people like to do all four.

Damage her to 66%, she will will spawn three adds and disappear. She will reappear and disappear again at 33% health.
Supernova – This will blind and heavily damage (kill) anyone in the party who does not look away. Make sure you look away.
Astral Rain – A party-wide AoE your healer will need to heal through.
Veil of Sky is a magic shield that causes attacks against Isiset to drain her mana instead of health. It also reflects 20% of all incoming spell damage, but can be Purged or Spellstolen.
Celestial Call will simply summon a Celestial Familiar, which should be killed quickly. Every time Isiset splits, the number of Familiars she will summon will increase by one.
At 66% and 33% Isiset will split up into her three Aspects – Astral Rain, Veil of Sky, and Celestial Call. Killing any one of them will force her to reappear in her single form and it will remove the ability that you killed. If you killed Astral Rain, then her AoE effect is gone. Caster based groups might want to get rid of the Veil of Sky shield, first. 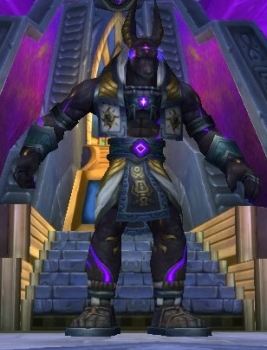 Has no aggro table and so is untankable.He will zap his current target with Chaos Bolts. Setesh spawns portals which must be DPSed down and destroyed, otherwise you get the adds:

(Tanks should kite the Void Wyrms and DPS where they can)

First add to come out of the portal is the Void Sentinel which must be tanked till the end of the fight as they have a 75% damage reduction.

Second add to spawn is a pair of Void Wyrms which must also be tanked. They can be killed by dragging them through the purple puddles that the boss creates on the floor.

Third add to spawn (you really don’t want this) is the Void Seekers which channel a debuff on their targets which makes their targets unable to cast or receive healing.

Stay out of the purple puddles. Stay out of green domes on the floor.

He also spawns black crystals (Seed of Chaos,) with a green aura which place a debuff on the player when popped by running over it. Debuff lasts for 20 seconds and allows the player to shoot a 18k+ bolt at his target when he damages something. Crucial to fight. Does not stack, so call out for someone to pick it up if you just picked one up. if it is too far from you, avoid it as it will be a DPS loss.

Zerging this boss is only an option if you have a good group. 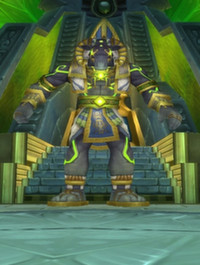 Kill the Seedling Pod things that Ammunae spawns.Just have a ranged DPS snipe them. Kill them as quickly as they appear, since the plants that they become are annoying.

The boss starts at 0 Energy. When he reaches 100 Energy he will cast an AoE, Rampant Growth, which will do a pretty decent amount of damage and instantly grow all the pods into mature plants. 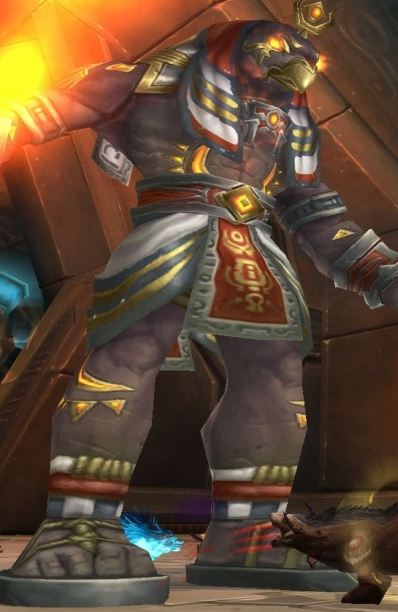 Interrupt spells. Stay out of fire tornadoes/fire trails. Starts at 100 Energy, but his spells cost him Energy. When he reaches 0 Energy he will wlak to the middle of the room and start dealing huge AoE damage to recover his Energy. You should be able to kill him during this phase.

Some of the spells can be interrupted, which will help keep his energy high (and delay the big AoE) and the party healthier.
Leap and Die: Inferno Leap is a deadly leap that will likely kill anyone Rajh lands on. Move away from it, or even better – interrupt it.
Sun Orb: Summon Sun Orb will summon a Orb of the Sun to attack you. It can and should be interrupted.
Rajh will also summon: Solar Winds, that will move around the room, leaving a trail of fire, and damage players. Those are easy to avoid, but also not interruptable.
When his Energy drops to 0, Rajh will buff everyone with Blessing of the Sun, causing everyone to take some decent (but not lethal) damage, but also deal twice as much. The recharging phase lasts about 20 seconds, until Rajh restores all of his Energy. He should be dead before this point.

Gold and much more, get it here!