Siege of Orgrimmar, Boss #4: The Sha of Pride

Siege of Orgrimmar, Boss #4: The Sha of Pride

The final burden on Emperor Shaohao, Pride. Now awakened due to Garrosh Hellscream’s all consuming arrogance.

This completes the first wing of the raid. The goal here is working out how not to take a lot of pride and what to do when you DO get too prideful, plus how to get people out of jail. Not much movement is needed here and the adds are pretty easy.

Quick and DIrty Sha of Pride 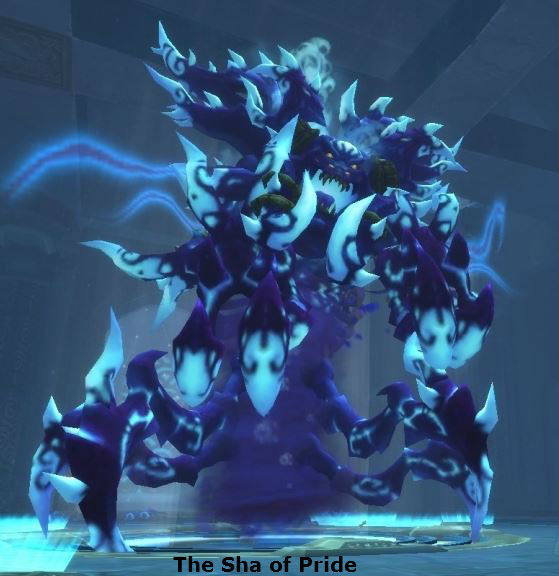 Gift of the Titans is cast on occasion by Norushen. It lasts 20 seconds and grants players immunity to pride. Players shold stna dnear each other, when the Gift is up, to get a 15% buff to Haste, healing, and damage.

A Manifestation of Pride periodically appears behind the group, always in the same place, and attacks. It blasts away at random players until killed. When it dies the two closest players get +5 Pride. DPS might want to rotate being on Manifestation Duty.

Self Reflection causes Reflections of Pride to appear at the location of up to 5 players. Burn them down quickly.

Go to Prison: Two of the prisons round the Sha will activate, one near the tank, the other near the group. Two players are sent to the prisons. When the prisons activate there will be a burst of damage and a knockback effect. Player in the prison will take continuous damage and be able to take no actions until freed. They also gain 5 pride per second until freed.

Sections next to the prison will change color. A player has to stand on each section until both change back. They player is then released.

Reaching Attack isn’t likely to happen as the Sha only does this when no targets are in melee range. He will strike at a random distant target and put a debuff on that targat which increases their Shadow Damage taken by 25% for 8 seconds.

Unleashed happens when he hits 30%. He’ll kill Norushen immediately and then pulse 245k damage every ten seconds, pls all the rest of the stuff, until the end. BTW- when Norushen dies all players have their Pride values reset to zero.

How to: Sha of Pride