The First Boss of Siege of Orgrimmar: Immerseus

Immerseus’ is the first boss in the Siege of Orgrimmar.He’s not real hard, but does have several lives that you have to work through. You will want two tanks, regardless of raid size, and 2-3 healers for the 10 man raids. 5-7 for the 25 man raids. The rest are, obviously, DPS and you want a mix or ranged and melee. See below for videos detailing the fight.

HP ranges from 62 million HP in 10 man normal, to 268 mill, on Heroic 25 man. But his HP isn’t really the important thing. His Corruption level is.

How the fight works, in General: 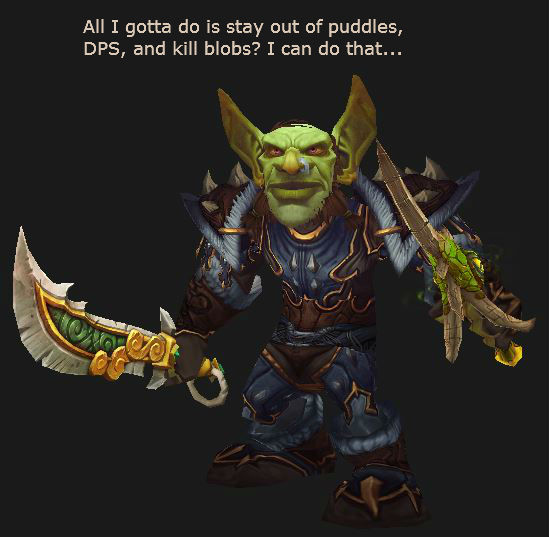 Immerseus starts with two bars, Health and Corruption level. Your end goal is to reduce the corruption level to zero. This will require reducing his HP to zero at least four times. Each time it goes to zero he splits into 25 blobs. Each one that is dealt with will reduce his corruption by one. Do all 25 and he loses 25 Corruption. Do this (at least) four times and you win.

Immerseus Phase: The fight alternates between two phases. Phase one is against Immerseus himself and is the less important phase. He will throw out some damage (see below) and your job is to get him down to zero HP as soon as you can. When he reaches zero he will split into 25 blobs. He will try to kill you off with:

Blob Phase (Split Phase:) The 25 blobs will go to more or less random parts of the room and all will move towards Immerseus. Once they get there, or are all dealt with, Immerseus will reform. His new corruption level will be down by how many blobs you killed or healed. deal with ten blobs and he now has 90 corruption. Deal with all 25 and he’s at 75. His health bar will also be proportional to his Corruption bar, eg: 90 or 75% going by the prior examples.

In this phase you want to…

Note that with the lower HP every time he reforms the Immerseus part of the fight will be shorter. Deal with all the blobs every time and the fight should last just the four cycles.

Pretty much the same thing

The team should be spread out, both to help stay out of damage waves and to be better able to dispatch the blobs in the split phase. Healers should be positioned to be best able to deal with this spread.

Constant movement will be required to stay out of effects. It is possible to be surrounded by the void zones from the Sha Bolts. Try to leave yourself a patch to move, both when he fires off his Swirl ability and when, at the end of the Immerseus phase, all the void zones slide back to the center. You don’t want to be trapped by that.

DPS (and others) will make good use of their damage reduction abilities (shield spells, cloaks, etc.) Burst movement abilities will come in handy at times. Try to stay in range of your healers.

Healers need to be aware that as the fight goes on there will be more and more of the Corrupted Blobs that need to be healed. Put yourself in position to heal as many of them as possible. DPS and tanks won’t have much to do here.

Healers should also try to make sure they’re in range of their set of targets.