The Changes to Stats

As you probably know by now, Hit & Expertise are dead in Warlords. In addition Reforging will be slain. Any pieces of gear with either stat will have those stats changes to something else. Any racials covering Hit or Expertise will also be changed.

There are some other changes, as well:

Hey Brewmasters, there are some changes to Dodge and Parry:

Blizzard likes the Active Mitigation model, feeling that it’s worked very well. As things progress they want to keep the amount of Dodge and Parry on tanks on the low side. They feel that a Dodge/Parry tanking model makes for too much “spike damage” and isn’t fun. So the Dodge and Parry gains from Strength and Agility are being reduced to help accomplish this. Additionally, items in Warlords of Draenor will not have Dodge or Parry on them as a stat. Some Dodge and Parry can still be gained through class-specific effects.

The Devs have decided that one stat will be the ‘preferred” stat for all specs of any class. Exactly which stat that is will depend on which spec you are. The idea is to give you a guide as to where to focus any bonus stats from gear or effects. The Attuned stat gets an extra 5% from all sources.

Ability Changes for Monks in General

Windwalker damage has been adjusted to compensate for these changes. Bliz’s goal is not to reduce DPS, but to balance things out and make the rotation a bit smoother.

The following abilities are dead

Tanking abilities, in general, are being changed somewhat. Bliz likes the idea of tanks doing significant DPS, but not more than DPS classes. So Vengeance is going away, but the DPS of other abilities in being increased to compensate. So a few changes to adjust that are:

And in the other abilities:

Blizzard hasn’t been quite happy with Mistweaver Monks and came to realize that a lot more tweaking was needed, but decided to wait till the expansion to do that. Now that it’s on the way there are going to be a few changes to how things work.

Regarding “Eminence” healing Vs “Traditional” Healing, Bliz wants to do a better job of keeping the two separate.

Having two play styles in one spec (Eminence, and traditional Mistweaving, healing primarily through casting heals) proved challenging to balance, because we don’t want players to take the best parts of both and stack them into an unintended superior spec. The most notorious of these cases was “Jab-Jab-Uplift”. In order to solve this problem, we’re giving Mistweavers two stances. Stance of the Wise Serpent will continue to be the stance from which to do traditional Mistweaving. The new Stance of the Spirited Crane will be the stance to use for Eminence. You can swap stances at will, with only the cost of a GCD and any current Chi that you’ve accrued. The intention is that Crane Stance allows Mistweavers to trade healing for damage; it should fall somewhere in the middle between being a full healer, and being a full damage dealer.

Haste and the Global Cooldown also turned out to be issues, so…

We explored a few options, but ultimately landed on changing the core GCD for Mistweavers from 1 second to the standard 1.5 seconds, which you will be able to reduce with Haste. This will feel jarring at first, but we’re confident that it’s for the best, long-term.

And the changes are…

Healing Spheres for All (Sort of…)

The powers the be decided that the Healing Spheres were a bit overpowered, in some ways, so did a bit of tweaking.

New Talents and some Changes 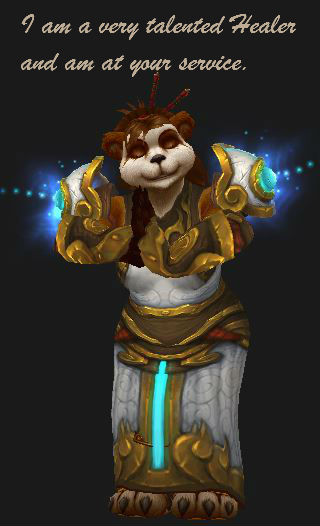 Naturally there will be a few changes to your talents, in addition to the new ones. With the changes to stats, health, the item squish, and everything else we can probably expect many of them to have at least minor changes.

Here they are as of this writing:

You can see the new talents for all classes here. Many of the new WoD talents are specific to one or another spec. For example, the first talent will actually be three separate talents. Which one you have access to will depend on your spec.

2nd Talent: Chi Explosion costs from 1-4 Chi and does increasing effects depending on how much Chi is used. It has the same name for all specs, though the effects differ. In all cases it replaces your Blackout Kick.

The New Monk Abilities and Your Perks

Usually when a new expansion comes out there are a number of new abilities than come with it, in addition to talents, glyphs, etc. This time around the theme is “cleaning up the action bars” so adding a pile of new abilities just isn’t happening. What you’re gong to get instead is a set of Perks. These are  enhancements to existing abilities, such as +20% damage or healing. They’re also learned randomly. There are nine perks for each spec, learned at 91 and each level afterwards till 99, and you acquire them randomly until you have the whole set. This means that your level 95 Monk might have entirely different perks than that other level 95 Monk.

All that said, there are a couple of new abilities that you’ll be getting at level 90. One of these is a “Readniess” stat, which will reduce the cooldowns of various abilities. Some of the gear that you find will have additional “Readiness” on it in the same way that it has any other stat, such as on this neck item. The cooldowns reduced are for your Fortifying Brew, Transcendence, and Zen Meditation abilities in addition to others particular to your spec.

The other new ability adds 5% to your best secondary stat, in line with the new “Stat Attunements” above.

And The Perks Are:

You will gain one perk per level from 92 thorough 98, four total, one every two levels, but which one you get is picked randomly from the list.

How About the Glyph Changes for Monks?

There are not a whole lot of glyph changes, so far. Naturally a few will be zapped and some will be tweaked, but it’s not like they’re making some kind of wholesale changes. At least not yet. So far there are remarkably few changes.

One new thing is that glyphs will now have categories and you can only load one glyph of any given category at any one time. An example is: Glyph of Detox and Glyph of Detoxing.

One interesting change that they are making is that some glyphs, for every class, will be automaticlaly learned, rather than boiught from the Auction House. Yes, you will learn them just like you learn your other abilities. They’ll pop into your glyph slots at the appropriate levels, free of charge, though you will still need to install them. Any other glyphs you want will require that you buy, beg, borrow, or steal as you have before.

New glyphs, and maybe more are to come?

Other than the changes noted above there aren’t any Monk specific changes coming in the PvP game, but there are a couple of general changes that are of note.

So what do you think?

Are the above changes good? Bed? Indifferent? Enough to get you to play a Monk, or maybe change to another class? Comment below.