And he thinks he could have gone faster!

By the way, some people say that leveling has become too fast and easy. If you’re one of those then check out another post, The Ironman Leveling Challenge.

The list: Aside from just putting your nose to the grindstone and getting to work, here are ten ways to get a lot more XP coming your way a lot faster.  Some of these will cost real money and a couple require a real buddy to help out. Everyone, even brand new players, will be able to use at least a couple of these.

Update 2: The Monk daily not only gives you the XP buff, but it also gives more XP for completing the quest than other dailies.

Various heirloom items grant you 5-10% additional XP each and they stack with each other. More pieces are better than one. The pieces that provide XP gain are the  Head, Shoulder, Chest, Back, and Leg items. Catch them all and you have a 45% XP gain. These items are available to all classes and specs.

You’ll also get leveled more rapidly since the heirlooms are better than most of the rest of the gear you’re likely to have. You’ll kill the opposition just that much faster.

Your level 6 Guild perk provides a 10% boost to experience earned (it’s 5% at guild level 2.) You do not need to have any particular rep with the guild to be able to use these perks. Even if you join a level 1 guild it should level fast enough to get to level 6 pretty quickly. Obviously, a level 25 guild will give you other useful perks. A larger guild might well give you plenty of people to level with, as well.

3 – Other Items and Edibles

By virtue of being more enlightened that the rest of the Azerothian races your Inner Peace allows you to get double Rest XP. Meditation for the win. 😉

Enlightenment is achieved through doing the Monk daily quest on the peak of Serenity. Upon completing the quest you gain a buff which provides +50% XP for an hour. The buff durations stack, so if you log in just long enough to do the daily for 10 days in a row you will get 10 hours of +50% XP. This is a good idea if your Monk is parked for the time being. When you get around to playing that character again you will have many hours of extra XP saved up. The maximum stack is 24 hours. At level 85 it drops to a 20% bonus.

BTW, you can use this macro when looking for the correct master for your daily training. Only the master that is appropriate for your quest will be targeted.

So yeah, a Pandaren (Windwalker) Monk doing their daily quests, with the five +XP heirlooms, guild perk, Darkmoon Hat, and any appropriate chemicals (Elixirs) that you can acquire should be, by far, the fastest leveling thing there is. (And here’s our Monk leveling guide, which will help.)

Add any of the items below and it will go even faster.

6 – Having a buddy run you through dungeons. 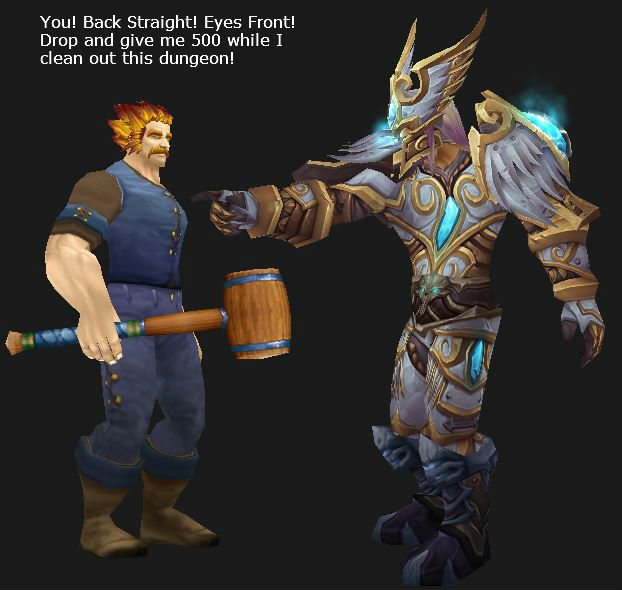 This can be a bit dull, but it can also be very fast. The basic idea is that your high level buddy, who can easily solo the dungeon, teams up with you and he kills everything in the dungeon while you collect the fast XP.

The dungeon needs to be level-appropriate for the leveling character. Loot should either be set for “free for all” so that you get all of it or you make another arrangement. Your buddy might want to farm the place, after all, so make sure you’re on the same page.

Since you won’t have much to do it can get dull, especially for long stretches. BTW – your buddy will need to keep repairing his gear. Perhaps you can send him some gold to help with the costs.

If you’re tough enough, know your skills well, and have excellent gear (such as a full heirloom set,) you will be able to solo level-appropriate dungeons — at least as far as the trash is concerned; the bosses will be a lot tougher.

The advantage is having many elite mobs close together.

You can get a lot of experience by competing, and winning, in the Battlegrounds. Losing doesn’t give you much more than questing, winning gives you a lot.

If you have a well-geared team you could do premade PvP groups, clean up the BGs, and level very quickly. Plus, you get Honor Points to spend on mounts, heirlooms, and whatever gear you need that isn’t taken up by heirlooms. If the queues to get in the BGs are long then you might want to do some questing while you wait. Or you can role-play in your main city. Or something.

Dungeon leveling is similar. Since the wait times can be long it’s best to mix this up with questing. The Dungeon Finder tool will get you in, and then you rampage through the place with your team. Stick with the tank and do your best to help. Some of the people in these groups are jerks, but a few might become good friends.

if you’re a tanking class then your wait times will be close to zero. Two minutes is a long time for a tank to wait, a very short time for others. 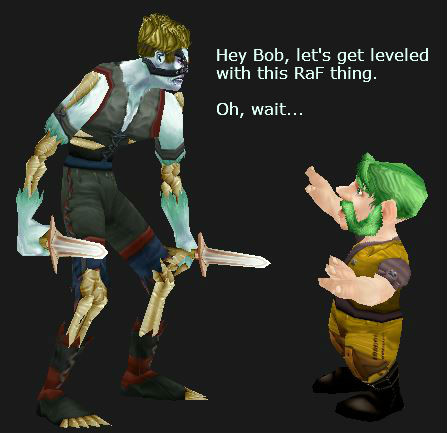 Triple XP, what more needs to be said? You just need someone (a friend) with a new account. You link the two through the RaF and you’re good to go all the way to level 85. Here’s the FAQ, and there’s another description here. Reddit has a page to help find an RaF buddy as does WoWhead. Both are pretty popular, and there are other “Find an RaF Friend” sites.

Pandaren Monks with RaF, heirlooms, guild perk, hats, and chemicals will get to 85 and then 90 with amazing speed. Make sure that both players are Pandaren Monks or that both are not, and that you both have the same gear and chemicals. Your levels have to remain close to each other or you lose the bonus.

Dual Boxing and RaF. Dual boxing is when you own two accounts and run a character on each simultaneously with one set of commands. (Some people take this to extremes and do ten or more simultaneous accounts. ) You create a new WoW account (#2) and your #1 account invites #2. You use the dual boxing software to run them together and get the RaF benefits.

You can visit Hotkey for one version of the software. Here’s a video tutorial which will show you how to get it running. Note that I have not used the software, so you will have to do your own research into it. There are also other programs out there.

Also note that this is not botting. You are in complete control of both (all) characters at all times. As far as I know Blizzard is fine with this. What you do with account #2 when done is up to you, though some will keep that account in order to continue dual boxing in end-game content. It should make stuff like Timeless isle a bit easier (re; ganking.)

If you’re questing then a leveling guide is a great way to speed things up (here’s a review of our favorite guide.) If you’re doing PvP or dungeons, then it’s not going to be much help. If you’re questing, for all or part of your 1-90 run, then it’s pretty hot. It will point the way to go, all the way, showing you where to go and what to do every step of the way.

You’ll skip the weak quests and never have any doubt as to where to go next. When you’re ready to go to a new area then it will let you know and show you the way.It doesn’t matter whether you’re brand new or decked head to toe in heirlooms with a dozen 90s, the guide will help you get there faster.

Summing Up – The Ultimate in Speed leveling

Ok here we go: A pair of Pandaren Monks, one Windwalker and one Brewmaster, using RaF and full heirlooms. Both have the same heirlooms, both do the Monk dailies, and both have the same rest XP and other items.

You can either quest or do dungeons. With the dungeons the Brew tank will make sure the queues are very short. With questing, and the guide mentioned above, you will tear along almost as fast and not have to deal with iffy groups.

What about you? Have anything to add? Any techniques that I missed? How fast do you get leveled?