Found a nice, quick and dirty guide to getting your item level up as Battle for Azeroth comes to an end. (Shadowlands on Oct 26.)

A summary of the video:

Another 8.3 Video, for PvP Gearing.

From Skill-capped. This one is better then the above video, but longer. The rogue page mentioned in the video is here.

World Questing was mostly left out of the above video, but is a nice thing for solo players. You can get 415-420 item level pieces, and Azerite for your neck piece, as well as gold and rep. Complete 4 quests for a faction and get an award from them, which typically includes more azerite. 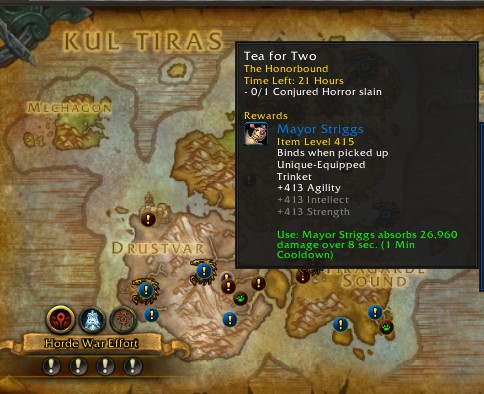 How to Unlock BFA World Quests

You can track your progress in Wowhead’s Battle for Azeroth Attunement Tracker.

If you already have unlocked World Quests on a 120 character before, future alts still need to unlock all three footholds from their War Campaigns, but they are no longer required to reach Friendly with their factions.

Zygor’s Guide will run you through Dungeons, has a World Quest planner, and will take you through the Magni quest lines, plus a bunch of other stuff. There is also a gold guide to help you with buying your better gear.

Not to mention getting from 1 to 120 ASAP. And Zygor will be 100% ready for Shadowlands.

Check it out here.