Pages that are updated for Mists of Pandaria (and later) are here:

Please note that the page below is the old Cataclysm page. See above for links to updated pages.

The following is Updated for Cataclysm 4.3, with Mists of Pandaria gems and enchants. 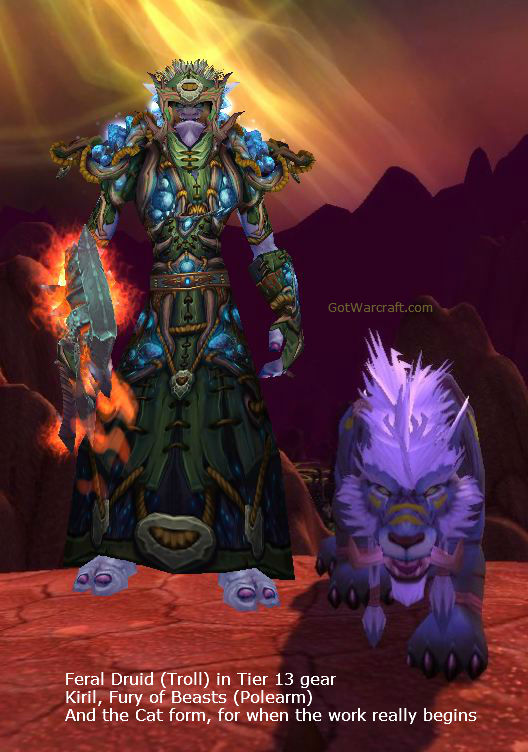 Prowl and ambush like a Rogue?
check
Ideal flag carrier in PvP?
check
Heal with the best of them?
check
Tank almost as well as Prot Pallies and Prot Warriors?
check
Nuke from range while wearing a Super Chicken outfit?
check

Why play anything else?

With Cataclysm the Feral Druid is still the lean, mean, ripping and tearing machine that it always was. Rip things to pieces as a cat or soak a ton of damage as a Bear, you’re doing rather nicely in this expansion and will likely be just fine in the next. And, along with the ripping and tearing, it’s nice to be able to throw a few heals about from time to time.

Unlike Balance Druids you’re the killing machine who likes to rip his opponents into chunks, hand to claw. In your face pure feral power. You can still pop into human form to cast spells or heal, but the beast form is where it’s at.

Note: Some aspects of this guide may not apply to your character until higher level. If are interested in getting your character to max level quickly, take a look at this leveling guide.

You have to spend 31 points in Feral (or any spec) before you can branch out into the other specs. You do not have to buy the top tier spec with that 31 points. 41 points at 85 is all you ever get. Mists of Pandaria will completely change the talent system.

As a Feral Cat your basic abilities are: 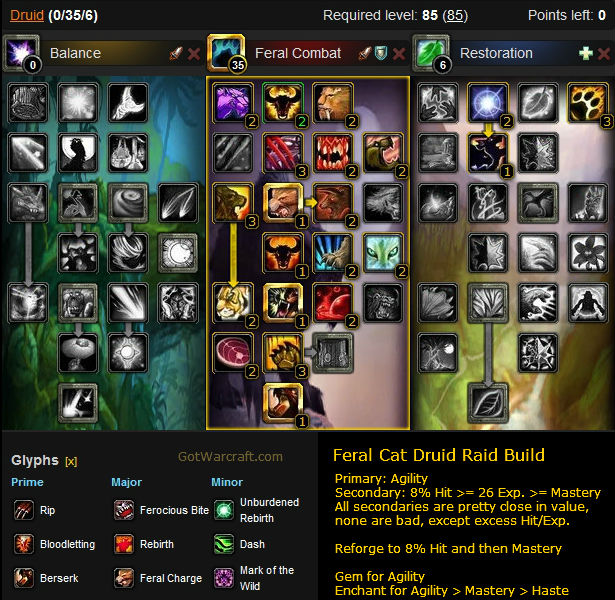 Minor Glyphs often times provide small quality of life improvements or visual changes, such as the Glyph of Shadow Form for priests which makes the character more visible through Shadow Form. However, a few are known to provide more significant benefits such as the warrior glyph of Berserker Rage.

To maximize your DPS, keep the faerie fire armor debuff effect active at all times. Attack priority is to keep your variety of Bleed DoT effects active, while also using self-buffing effects such as Tiger’s Fury whenever possible and Ferocious Bite when nothing else is needed at that moment.

The most important aspect of managing your cooldowns as a damage dealer is making certain to use them whenever they’re avaliable. Don’t be afraid to use them during any fight, even against trash mobs, as the higher the uptime you have with them, the greater your overall damage will be so long as you aren’t using them when a fight is about to end.

The only time to hold off on using your cooldowns is when you’ll be unable to attack the boss due to fight mechanics, such as during Morchok’s Black Blood of the Earth ability or when Hagara is about to cast Water Shield and become immune to all damage.

Melee DPS will have to watch out for this more than ranged, as they are far more vulnerable to situations where an encounter requires constant movement or the boss is utilizing some form of AoE attack that makes fighting in melee range impossible.

Agility: Your primary attribute as a feral combat Druid, Agility increases damage (attack power) and critical strike chance. By far your best stat, it assists with everything that you want to do.

The secondary stats are all very close in value to each other, unlike for other classes where one or a couple will be clearly better than others.

(8%) Hit Rating: Hit rating reduces the chance of your attacks missing. A hit rating of 8% removes the possibility that special attacks, or yellow damage as opposed to the white damage of regular attacks, will miss your target. Your Swipe attack makes Hit a good stat, but Hit is weaker against single targets.

(26) Expertise: Expertise reduces the chance for your attacks to be dodged or parried. An expertise rating of 26 makes it so that your attacks will never be dodged while you are behind the target. Expertise and Swipe go well together, making this a useful stat. If you only fight single targets than it’s less useful.

Strength would have some value if it didn’t compete with Agility. Avoid Str items.

Critical: Critical rating increases your chance of a critical strike.

When reforging gear, it’s important that you look to reforge from your least effective stat into the most effective for whatever gear goal you are currently aiming for. With Feral Cats, where all the secondary stats are pretty close in value, reforging becomes an interesting exercise.

Mastery & Haste are probably good stats to focus on, though if you do a lot of fights against multiple mobs you should have that 8% Hit. In all cases, Hit/Expertise that are above the caps have no value. Maximize these stats by reforging into either stat on any piece of gear that lacks one of these stats.

Agility is, by far, your best stat, so unless a socket bonus offers agility it is more effective to gem for pure agility and ignore the bonus. There might be times when you want to socket other gems, so those are shown here as well. Quick and dirty? Just gem Agility.

Note that Mists of Pandaria

(MoP) gems will have much higher values than those from Cataclysm. Replace your Cata gems with comparable MoP gems as soon as you are able to do so. If you can afford to buy the best gems then dropping down one level is not a huge issue.

MoP = Mists of Pandaria. MoP enchants require item level 372 or better and you’ll notice that they are somewhat better than their Cataclysm counterparts. New enchants (and gems) are always very expensive when the appear, and sometimes afterwards. If you need more cash to be able to buy these things then check our Tycoon review.

Note: Landslide procs from separate weapons do stack with each other. Back to back procs from the same weapon do
not stack.

Pandarians are unable to become Druids.

The question of “which race” for your new Druid used to be a “difficult” one, Horde (Tauren) or Alliance (Night Elf.) With Cataclysm the choices are:

Trolls look like they may be the most efficient class for Druids, but player interest and skill will more than make up for any racial differences. Pick the race that works best for you.

Main Professions for the Feral Druid

All of the professions provide some self-only buff, which is typically about 80 points worth in Cataclysm and somewhat more in Mists of Pandaria.