The Druid in Mists of Pandaria 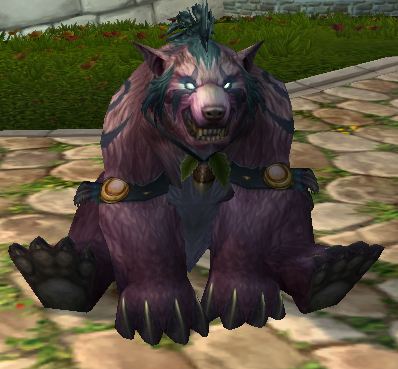 Take all your Cataclysm builds and chuck ’em.  They’are all dead and useless. Mists of Pandaria is revising everything. All classes will share a pool of abilities, as they always have, but each spec in each class will have a set of unique abilities that define that spec. These abilities will be learned from your trainer, as you level, just like any others.

By the way. Druids will have four specs in Mists of Pandaria. In reality, they always have, now it’s just official.

Note – this page is a work in progress. If you find something wrong, leave a comment.

The talent system from Cataclysm is gone, as mentioned above. Many of the old talents (and some glyphs) have been rolled into abilities learned from your trainer. Many others have been ganked outright.

Glyphs (for all classes) are changed. Prime glyphs are dead. Many individual glyphs have either been slain or have been changed in some way. primes and Majors have, more or less, been merged. Minors are similar to what they were before. You will have six glyphs at level 90, three major, three minor.

Battle Pet Training is a new ability, for all classes, that you get from your trainer. There are a few new abilities, in the table below, and check out what Symbiosis will do.

Druid Talents for Mists of Pandaria

This is the new talent page, many of the old talents have been rolled into abilities that you will get from your trainer. 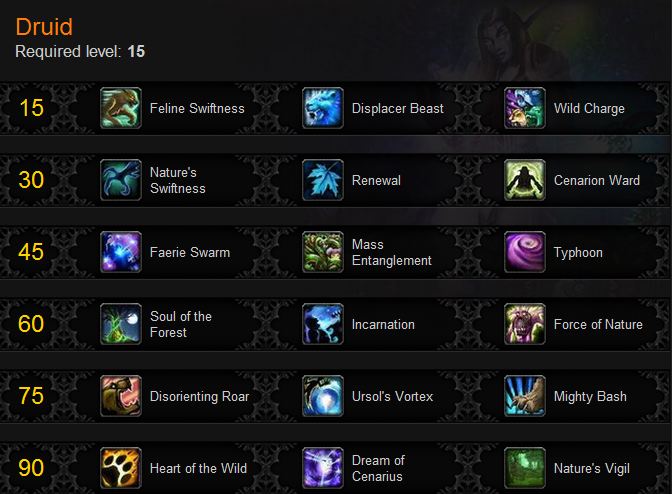 Hover over the links for more info. Any Druid spec can pick any one talent from any row. You will have six total talents at level 90. Notes that there are no points to be spent in any talent, you will get the whole thing when you make your pick.

Druid Abilities in Mists of Pandaria

This is the list of general abilities for Druids, all specs get all of these. See below for abilities unique to each spec.

There have been a few changes and a couple of new abilities. Some of the abilities have had their level requirements changed and I’m not certain how correct these are. (WoWhead’s databases disagree.) I’ll update when possible.

Druid Specs in Mists of Pandaria

As mentioned above, you now have the four specs. Dual builds are still available, so you can still pick two. The old Feral tree and been split into Feral (Cat) and Guardian (Bear.) Each spec will now have a set of abilities, not talents, unique to that spec.

Points are not spent in any ability, you will get the whole thing when you get it, and they are all learned from your trainer. 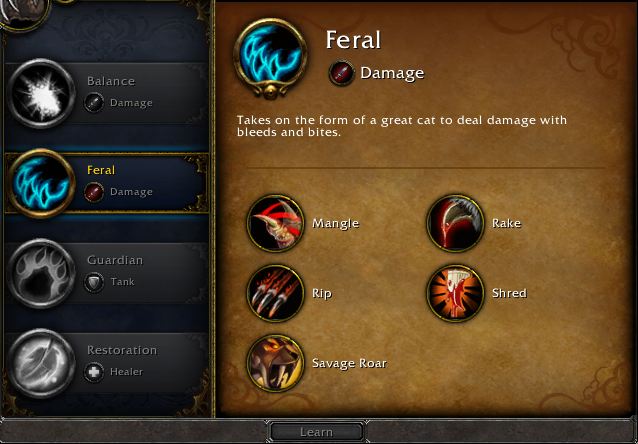 These are in addition to the abilities listed above. Notice that some of these used to be talents. All of these are picked up from your trainer at the appropriate level.

All of the old talents

Some are dead, some are abilities, some have been rolled into other things. I probably missed a few, leave a comment if you see a problem.

In a nutshell – The druid can both give an ability to another character (for an hour) and borrow one at the same time. Druid an player need to remain reasonably close to each other, 30 yards. The spell you receive isn’t quite as nice as the original, but is still useful. No one loses a spell, but the recipient gains it for an hour.

Keep in mind that the M of P launch is two months away as I write this, so this ability may change. Given how overpowered it might be right now, change might be very likely.

This table lists all of the abilities gained by Druid and Recipient.

3 thoughts on “The Druid in Mists of Pandaria”